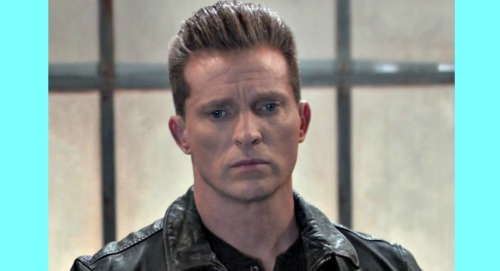 General Hospital (GH) spoilers reveal that Steve Burton (Jason Morgan) wanted to show some love to a costar – and the feeling was definitely mutual! It’s always fun to see GH cast members supporting each other, especially when fan favorites are involved. On Twitter, Genie Francis (Laura Collins) had some kind words for Burton as well as Maurice Benard (Sonny Corinthos).

“Such a pleasure to work with @MauriceBenard and @1SteveBurton on the scenes that aired this week,” Francis said. “Lots of good stuff coming up!” Many General Hospital fans agreed those were indeed amazing scenes. Laura doesn’t typically have much airtime with Jason and Sonny, so seeing them all together was a real treat.

Of course, there’s much more to come, which Francis indicated in her tweet. The good stuff she mentioned undoubtedly involves the escalating mob war, which will give Laura a chance to be a total boss! She’ll head to Pentonville and try to take on Cyrus Renault (Jeff Kober) herself. He’s one menacing dude, but Laura won’t be scared – at least not scared enough to back down.

GH spoilers, updates and news say Laura will have a little side war going on with Sonny and Jason. If Sonny can’t do his part and end this nightmare, Laura may have to take him down, too. Their friendship will be in jeopardy, which will give Francis, Burton and Benard even more opportunities to shine.

Burton clearly thinks Francis is rocking it, so he shared her tweet and offered a shoutout of his own. “Love this woman. That is all,” Burton said. General Hospital fans love Genie Francis, too!

Most of us remember the outrage that came back when Genie Francis was fired and written out. It brought some fierce complaints from viewers, so it’s awesome to see Laura in an exciting front-burner story again.

General Hospital spoilers say Laura could make an enemy out of Cyrus if she’s not careful. She’ll pull some strings and attempt to have Cyrus thrown in solitary confinement, where it’ll be harder to deliver lethal instructions.

Laura will hope she can cut off contact between Cyrus and his goons. However, Cyrus is one crafty character. He may find a way around Laura’s hurdle and could perhaps retaliate.

It sounds like some gripping drama’s set to unfold. We’ll deliver updates as other GH news rolls in. Don’t forget to drop by CDL frequently for other General Hospital spoilers and scoops.

Love this woman. That is all. https://t.co/Bxf8GsZJNg