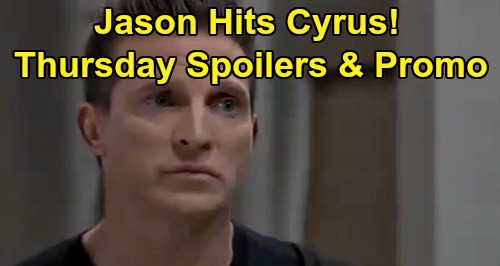 General Hospital (GH) spoilers for Thursday, April 16, tease that Harrison Chase (Josh Swickard) will offer Willow Tait (Katelyn MacMullen) a reminder. Chase will insist that when it comes to marrying Michael Corinthos (Chad Duell), it’s Willow’s choice to make. Of course, Willow may disagree and argue that they have to make this decision as a couple, but Chase just won’t see it like that.

Chase may worry that Willow would come to resent him for standing in the way, so he’ll make it clear that she should do what feels right.

Naturally, none of this feels right since Willow’s in love with Chase! It’s a big mess, so Willow will have a lot to think about. Over with Michael, he’ll worry about the outcome of this custody battle.

Michael will hope Diane Miller (Carolyn Henessy) can pull off a victory without Willow’s involvement, but what if he’s wrong? Wiley’s the one who’ll pay, so Michael will fret to Sasha Gilmore (Sofia Mattsson) and Carly Corinthos (Laura Wright).

Chase and Sasha will ultimately decide to force their respective partners into this marriage. Since they’ll know it’s what Michael and Willow want to do – at least in a sense of putting Wiley first – Sasha and Chase will plot a drastic move to let them know it’s OK. It seems Willow and Michael will get caught in wedding trap sooner or later.

In the meantime, Maxie Jones (Kirsten Storms) will clash with Robert Scorpio (Tristan Rogers). When Maxie argues that Peter August (Wes Ramsey) has suffered enough, Robert will insist that’s a matter of opinion. Since Peter recently ordered a “distraction” for Robert, you can bet more trouble’s brewing.

Next, let’s talk about Charlotte Cassadine’s (Scarlett Fernandez) sneaky plan. Charlotte will tell Aiden Webber (Jason David) that she’s got a big surprise – and everybody needs to be there to see it. Although Charlotte believes her snake’s still in that pinata, it looks like she’s wrong about that.

Finn will round up the kids for the moment they’ve all been waiting for. General Hospital spoilers say Charlotte will count on chaos thanks to this pinata snake scheme. However, there’s a good chance Charlotte will be disappointed when only candy falls from the smashed unicorn.

Charlotte was already rude to Ava about missing her “real home” and Butterscotch missing her stall. Ava’s bound to think the little brat put the snake in her purse on purpose. Whatever the case, GH viewers will probably hear a loud scream from Ava soon enough.

Finally, General Hospital spoilers say Sonny Corinthos (Maurice Benard) and Jason Morgan (Steve Burton) will discuss moving forward with their Cyrus Renault (Jeff Kober) hit plans. Cyrus needs to be dealt with right away, but there will inevitably be more snags as Jason and Sonny try to take this baddie out.

As other GH updates become available, we’ll deliver all the latest news. It sounds like some shockers are ahead in Port Charles, so General Hospital fans will want to stay tuned. CDL’s the place to be for sizzling General Hospital spoilers, updates and news posts.