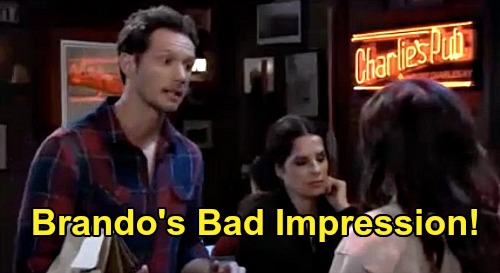 General Hospital (GH) spoilers recap for Thursday, April 23, reveal that Carly Corinthos (Laura Wright) disconnected from a call at the Metro Court, then turned to see Cyrus Renault (Jeff Kober) greeting her. Carly told Cyrus that he knows he’s not welcome there, but Cyrus said he was meeting someone, and at that moment Lulu Spencer (Emme Rylan) came along. Turns out, Lulu was there to interview Cyrus for The Invader. Carly wasn’t amused.

Lulu and Cyrus sat at a table, and Cyrus looked around the room. Lulu wondered if Cyrus was worried about his enemies being around, and Cyrus noted that Carly was his only enemy there.

Lulu wondered what Cyrus did for a living, and Cyrus said that he invested in whatever catches his interest. Cyrus explained that the DEA couldn’t find evidence against him, so they invented it, but that he doesn’t hold a grudge.

Lulu suggested that Cyrus share some personal stories for her article, and she was asking him why he wanted to relocate from Seattle when Laura Collins (Genie Francis) walked up. Cyrus immediately stood to greet Laura, and Laura didn’t look amused.

Lulu asked Laura what she was doing there, and Cyrus realized they were mother and daughter. Cyrus said he wanted to prove he would be a benefit to the community, starting with a generous contribution to Laura’s reelection campaign.

At another table, Neil Byrne (Joe Flanigan) and Alexis Davis (Nancy Lee Grahn) sat together, and through their conversation, Neil revealed that the medical board had revoked his license and he was no longer working at GH. Alexis said that she hadn’t heard from the New York bar, but that they’d surely take issue with the fact that she lied under oath.

Alexis noted that now there was nothing stopping them from being together, and she wondered if that’s why Neil invited her here. Alexis and Neil rehashed how they slept together in New York City, and how Alexis took a drink after an argument with Sam McCall (Kelly Monaco), and Alexis observed that Neil seemed angry. Neil confirmed that he was angry at them both.

Meanwhile, on the pier, Jason Morgan (Steve Burton) thought about Sam, and he spent several minutes flashing back to their history together.

Over at the newly remodeled Corinthos estate, Sonny Corinthos (Maurice Benard) walked in and thought at length about Mike Corbin (Max Gail) and the progression of his disease. Carly walked in and asked how things had gone with Mike, and Sonny said not good. Sonny lamented about Mike, then Carly told him about Cyrus’ meeting with Lulu at the Metro Court.

Jason walked in, and Sonny asked how Cyrus took their meeting cancellation. Jason said not well, but that Mike was more important. Sonny rehashed how he lost an opportunity to get Mike in the clinical trial because of Cyrus, then Sonny shared that Elizabeth Baldwin (Rebecca Herbst) had suggested a DNR for Mike.

Sonny stated that he thought it was too soon for a DNR or palliative care. Carly wondered what Mike thought about it, and Sonny said that he didn’t say much last night, as he was pretty unfocused. But Sonny said that they had a nice moment when he was feeding Mike, and that his dad was still in there.

Jordan said that maybe she should turn herself in and confess to being in on the conspiracy to frame Cyrus all those years ago. Curtis and Jordan went back and forth about what Jordan could do to neutralize Cyrus, and she even considered telling the feds about Harmony Miller (Igna Cadranel), but Curtis said that would end up signing Harmony’s death warrant.

Ultimately, Jordan concluded that Cyrus had her boxed in, and that there was nothing she could do but cooperate. Over at GH, TJ was back to work on crutches, and he spoke briefly with Molly Lansing-Davis (Haley Pullos), who said she was about to go meet her sisters later.

Molly kissed TJ happily and warned him not to overextend himself, then flashed back to her hookup with Brando Corbin (Johnny Wactor).

Later Mac visited with TJ, wondering if TJ remembered any additional details about his kidnapping ordeal. TJ went over everything again, explaining how he was jumped and where he was when that happened. TJ remembered the van ride on the way to the place where he was held, and that he had heard a train, then after 30-40 minutes, he was in a basement.

At Charlie’s Pub, Sam paid Kristina Corinthos-Davis (Lexi Ainsworth) a visit. Kristina told Sam that Julian Jerome (William deVry) had just given her a raise, and Sam thought that might be due to the trouble Julian recently made for Alexis. Soon, Brando came in to pick up take-out, and he introduced himself to Sam and Kristina.

Brando mentioned that Sam was a hero for rescuing Dev Cerci (Ashton Arbab) from the cult guy, then he went on to say, “How could anyone fall for that cult mumbo jumbo?” That upset Kristina, who rushed away. Sam explained to Brando that Kristina was involved in Dawn Of Day, and Brando promptly apologized to Kristina when she came back with his order.

That was a great episode of General Hospital! We’ll be sure to give you updates as GH news comes in. Stick with the ABC soap and remember to check CDL often for the latest General Hospital spoilers, daily recaps, and news.