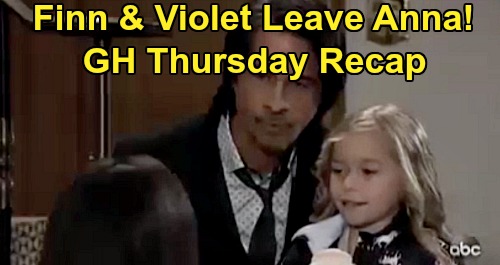 General Hospital (GH) spoilers recap for Thursday, February 13, reveal that the parole officer Delores Maloney (Andi Chapman) intercepted Sam McCall (Kelly Monaco) coming out of the exam room and said, “we have a problem.” She proceeded to question why Sam was at the hospital and tried to barge in the exam room where Jason Morgan (Steve Burton) waited. Epiphany Johnson (Sonya Eddy) suddenly appeared and demanded to know what Delores thought she was doing.

Epiphany covered for Sam and got rid of Delores, then proceeded to walk with Sam into the exam room and blasted Sam and Jason for being so careless. After Epiphany left, Sam told Jason that she’s going to have to convince Delores that he’s not a threat – either that or find a way to silence her.

At Anna Devane’s (Finola Hughes) place, she yelled at Hamilton Finn (Michael Easton) for betraying her, but Finn said that he went to Sam and Jason with the information on Peter August (Wes Ramsey) because he loves her.

Finn accused Anna of being blind to Peter, and that he’s a murderer. They argued bitterly, with Anna saying that now Jason is going to retaliate.

After a considerable amount of arguing, Finn accused Anna of knowing deep down that Peter is guilty, and she said that she needs to take this second chance she’s been given with him.

Finn understood, then quietly walked upstairs. Later, he returned with a packed bag and Violet Barnes (Jophielle Love). Privately, Finn told Anna that he had to protect Violet. They left as Anna cried.

At the Metro Court, Lulu Spencer (Emme Rylan) encountered Dustin Phillips (Mark Lawson), who was on his way to meet Jasper “Jax” Jacks (Ingo Rademacher) at Crimson. Meanwhile, at a table, Brad Cooper (Parry Shen) joined Nelle Benson Archer (Chloe Lanier) and promptly informed her that he and Lucas Jones (Ryan Carnes) were moving away once Lucas recovered. Nelle said that wasn’t happening.

After some back-and-forth, Brad told Nelle that he had confessed the truth about Wiley Cooper-Jones (Theo and Erik Olson) to Lucas right before the accident. Nelle was stunned, and she reminded Brad that Lucas’ memories could come back no matter where he was living. Brad acted nonplussed and left, saying he had arrangements to make.

At another table, Lulu joined Maxie Jones (Kirsten Storms) and Peter, and they engaged in some small talk about Lulu’s relationship with Dustin, as well as Damian Spinelli’s (Bradford Anderson) pending return to Port Charles and his tendency to antagonize Peter.

Soon, Finn and Violet arrived, and Peter learned that they were staying at the Metro Court for now, which made him wonder.

Next, Harrison Chase (Josh Swickard) and Willow Tait (Katelyn MacMullen) enjoyed a date night at home. As they dined together on the couch, Willow relayed that Lucas had asked her to look after Wiley again.

Chase gently expressed some concern that it might be hard for Willow to separate from Wiley when the time comes, but Willow said that she wants to help, and that she’ll take a step back when it’s time.

Meanwhile, at the gallery, Valentin Cassadine (James Patrick Stuart) listened from around the corner while Ava Jerome (Maura West) and Nina Reeves (Cynthia Watros) talked about Nina’s kiss with Jax.

Valentin materialized and quietly said that he had something to talk with Nina about. He promptly disclosed that the DNA test came back and he’s not a Cassadine. Nina expressed her sympathies.

Nina reminded Valentin that he was still Charlotte Cassadine’s (Scarlett Fernandez) father and told him not to give up. Nina reiterated that they were over, and Valentin left. Afterwards, Ava and Nina continued talking, with Ava saying that Valentin would probably end up killing Jax, but Nina said that Valentin had too much to lose. Ava thought that Nina should pursue Jax going forward, with Nina remaining skeptical.

Valentin headed back to his room at the Metro Court, where he started drinking vodka and put his gun in his jacket. He then took off. And at Crimson, Dustin showed up to talk with Jax, who promptly handed him a check for the PC Education Fund and wanted to know how Josslyn Jacks (Eden McCoy) was doing at school. Josslyn eavesdropped right outside the door.

Soon, Valentin came in and fantasized about killing Jax, but in his fantasy, Nina rushed in and yelled at him, saying that he’d lose Charlotte forever. Valentin then snapped out of it and somberly announced that he’s not a Cassadine and told Jax “congratulations.” After Valentin left, Josslyn noted how weird that was and she and Jax talked for a bit.

Dustin then went back to the Metro Court and regrouped with Lulu. Josslyn came up to them to thank Dustin, and she mentioned the earlier scene with Valentin. Lulu wondered what had happened and was stunned to hear that Valentin had walked in and announced that he wasn’t a Cassadine.

Valentin returned to his room at the Metro Court and spoke on the phone with Charlotte, nearly crying as he did. He then sat on the floor, drinking vodka directly from the bottle.

Valentin missed a call from Nelle, who left a message saying that she’s ready to sell him her ELQ shares, but that she needed to make a deal now, because she’s headed out of town.

As Valentin examined his Cassadine ring and the tattoo on his arm of the Cassadine crest, a woman appeared standing in the room. He said to her, “Tel me how you did it, Helena?”

That was certainly an exciting episode, and there’s much more to come on the ABC soap! Be sure to check back with CDL for the latest in General Hospital news and spoilers.