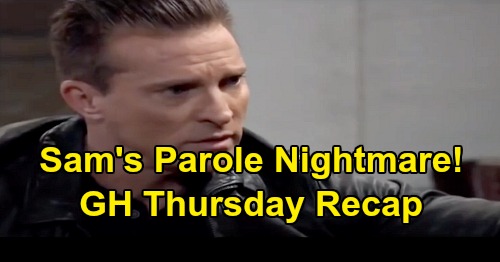 General Hospital (GH) spoilers recap for Thursday, January 2, reveal that Sam McCall (Kelly Monaco) and Jason Morgan (Steve Burton) met up at the Metro Court ahead of Sam’s home visit with her parole officer. Michael Corinthos (Chad Duell) arrived to reveal that he also got an invitation to Shiloh Archer’s (Coby Ryan McLaughlin) memorial service. Turns out, Kristina Corinthos-Davis (Lexi Ainsworth) received one, too. Jason said he has Damian Spinelli (Bradford Anderson) working on it.

Charlotte Cassadine (Scarlett Fernandez) then appeared and Laura caught her looking around for her bodyguard. Laura gently suggested that she made up the bodyguard out of a need to feel safe after everything she’s been through lately, but Charlotte insisted that he’s real – she saw his ring with a design just like Valentin Cassadine’s (James Patrick Stuart) tattoo.

This visibly upset Laura, who called Lulu Spencer (Emme Rylan) to have her send the photograph of Nikolas Cassadine (Marcus Coloma) from her phone. She did, and Laura was shocked to see that Nikolas’ ring was not visible in the picture.

On the turret outside, Valentin talked with Martin Grey (Michael E. Knight), saying that the codicil still exists and that he’s sure that Ava’s got it. He sent Martin down to get Ava, and Martin smoothly introduced himself to her and brought her out, then left Ava there with Valentin.

Valentin snarled that he wanted the codicil and asked Ava what she wanted in return. She claimed to want nothing from him.

Meanwhile, over at GH, Nina read the DNA test results showing a 99% probability of a mother/daughter match, then bumped into Sasha Gilmore (Sofia Mattsson) getting off the elevator. Sasha questioned why Nina wasn’t at her wedding, and when Nina dropped the test results, Sasha picked them up and saw them.

Sasha then pulled Nina into a room and asked her how long she’s known Valentin was involved. Nina revealed she’s known since the last wedding and explained how Valentin rigged the original DNA test.

Sasha could tell that Nina had some sort of plot for the wedding and asked her if she could go through with whatever she had planned. Nina then wished her a Happy New Year and walked out.

Sasha then went to the Metro Court to meet up with Michael and told him about seeing Nina at the hospital, and that Nina knows the truth about Valentin’s involvement in the fake daughter scam. Michael was glad, but he sensed that Sasha was thinking about showing up at the wedding and he warned against it.

Next, in their kitchen. Carly Corinthos (Laura Wright) told Sonny Corinthos (Maurice Benard) that Nikolas is alive and well. She went through the whole story about the codicil and Helena Cassadine’s (Constance Towers) portrait, and how Jax was helping Nikolas. Sonny noted that Nikolas was a fugitive, and that what Jax was doing is illegal.

Sonny demanded to know why Carly didn’t come to him as soon as she found out about Nikolas, and Carly explained that she didn’t want to argue and have him lash out and make things difficult for everyone. Together, they deduced that Ava likely knows about Nikolas, given her recent behavior.

Sonny then made a call and told someone over the phone to put eyes on Spencer Cassadine (Nicolas Bechtel), and that he wanted eyes on Nikolas, too. Carly reeled. Sonny was upset because Carly didn’t trust him, but she trusted Jax. Carly wanted to know where they stood now, and Sonny walked out, angry.

At her home, Sam welcomed in the gruff parole officer, Delores Malone (Andi Chapman), who wanted to know if Sam was in compliance with the rules, which included no drugs, alcohol, or firearms in the home. Delores then did a check of the place, and she asked about Sam’s kids and about whether Jason resided there.

Later, Jason returned home to find Sam in tears on the couch. Jason asked what the parole officer said, and Sam replied, “that this is the last time I’m going to see you.”

Back at Wyndemere, Nina burst in and apologized for being late. After spending a moment with Charlotte and telling her that she loved her, Nina headed upstairs to get dressed, and Jax followed her and appeared at her door.

Downstairs, Curtis approached an upset Laura, who revealed that Charlotte thinks that Nikolas is her bodyguard.

And outside on the turret, Valentin told Ava that they weren’t finished negotiating, but Ava insisted she wasn’t intimidated, and that pretty soon he wouldn’t be intimidating anyone.

Valentin then grabbed Ava and told her she wasn’t going anywhere – that she was drinking heavily, it was cold and icy, and it would be a shame if she slipped. And with that, he pushed her over the ledge, and she screamed as she fell.