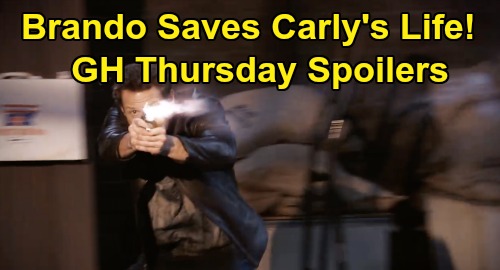 General Hospital (GH) spoilers for Thursday, January 30, tease that some shockers are in store. We should point out that GH is finally moving ahead with new episodes, so be sure to catch up online if you missed anything due to impeachment trial coverage. Now let’s get to all the hot drama happening this Thursday.

GH fans can expect to see the aftermath of those wild shootouts – and there were three big ones! In Brooklyn, Jason Morgan (Steve Burton) will go into Stone Cold mode after the gunman ignores his ultimatum. When the shooter refuses to let the waitress go, Jason will end up pumping a bullet in him.

As for Mike Corbin (Max Gail), he’ll endure severe emotional trauma thanks to this nightmare. Sonny Corinthos (Maurice Benard) will do his best to calm Mike down, but it won’t be an easy task.

Mike will just want to go home, but Sonny and Jason will have to deal with the cops first. There’ll certainly be questions about what brought all this danger into that diner.

Sonny and Jason won’t do much talking, but they’ll eventually be allowed to leave. Unfortunately, Mike will have to give up his spot in the study that could help with his memory.

Since Mike won’t be in the right frame of mind for it, it’s not a good idea anyway. Plus, Sonny and Jason will have to get back to Port Charles after hearing about the other shootouts.

Speaking of those shootouts, Laura Webber (Genie Francis) will be the only one injured down on the docks. She’ll be taken to GH after Dustin Phillips (Mark Lawson) arrives and scares the shooter away.

Dustin will be sorry the gunman escaped capture, but Josslyn Jacks (Eden McCoy) will think all that matters is Dustin saved everyone. She’ll view Dustin as a true hero.

It won’t take long for Harrison Chase (Josh Swickard) to realize Michael Corinthos (Chad Duell) was the intended target. He’ll grill Michael about the incident, but Sasha Gilmore (Sofia Mattsson) will feel like Chase is going overboard on the interrogation.

She’ll remind Chase that he’s supposed to be Michael’s friend and shouldn’t be harassing him like this.

However, Michael will get that Chase has to be a thorough detective. He’ll answer some questions while Carly Corinthos (Laura Wright) remains in danger at the warehouse. A mystery man will save Carly, but she’ll be puzzled when she ultimately realizes he doesn’t work for Sonny.

After Jordan Ashford (Briana Nicole Henry) gets involved, she’ll ponder the mystery guy’s story. Jordan will consider the possibility this man was working for the person behind the attack and then switched sides for some reason.

Gladys Corbin (Bonnie Burroughs) will face Jordan’s gun briefly, but she’ll declare that she was just an innocent bystander in all of this. After Gladys spots Carly’s injured hero, she’ll recognize him as Brando Corbin (Johnny Wactor) – that presumed dead son GH viewers have heard so much about.

Other General Hospital spoilers say Nikolas Cassadine (Marcus Coloma) will face backlash from Kevin Collins (Jon Lindstrom). Kevin will give Nik an earful about letting his loved ones believe he was dead.

Of course, the news of Laura’s shooting will later become the priority. Laura will need surgery to remove the bullet, but Hamilton Finn (Michael Easton) will be optimistic about her recovery.

Finn will also lash out at Nik over his decision to drive Hayden Barnes (Rebecca Budig) out of town. He’ll think Nikolas needs to tell Elizabeth Baldwin (Rebecca Herbst) the truth, but Nik won’t be certain now is the best time.

At Crimson, Nina Reeves (Cynthia Watros) will reassure an apologetic Jasper “Jax” Jacks (Ingo Rademacher) after their kiss. She’ll suggest she never really considered Jax her boss, so it won’t be a big deal to her.

Once Jax hears about the shootout involving Joss, he’ll want to make sure Josslyn is OK. She’ll fill Jax in on Dustin’s heroic efforts and introduce her dad to her teacher.

Valentin Cassadine (James Patrick Stuart) and Ava Jerome (Maura West) also have a faceoff coming up. Despite Ava’s anger over Valentin’s attempt to kill her, there won’t be much she can do about it. Valentin will be as smug as ever thanks to that dropped murder charge and the fact that he’s out on bail.