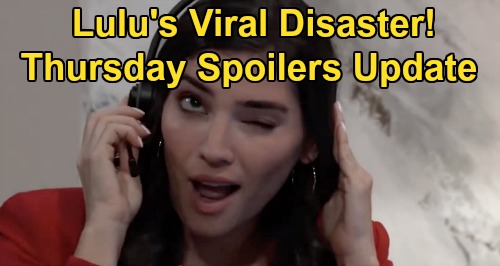 General Hospital (GH) spoilers update for Thursday, March 19, teases that Nina Reeves (Cynthia Watros) will get an explanation. Since Jasper “Jax” Jacks (Ingo Rademacher) can’t pony up any extra cash for Maxie Jones (Kirsten Storms), Nina’s naturally wondering why. Jax will share his reasons, but the point is Nina can’t follow through on what she promised Maxie. There’s apparently no chance of Maxie getting a raise.

Once Maxie gets updates, she’s sure to be even more irritated. Maxie already felt discouraged about her position at Crimson, but this should seal the deal on her departure. It should also pave the way for Crimson’s newest employee: Nelle Benson Archer (Chloe Lanier). General Hospital spoilers say Nelle will indeed be hired by Nina during the week of March 23-27.

In the meantime, Maxie will warn Lulu Spencer (Emme Rylan) about her destructive plans. Brook Lynn Quartermaine (Amanda Setton) accidentally posted confidential ELQ info to Facebook, so Lulu will view this as a golden opportunity. When Lulu hints about making this post go viral, Maxie may wonder if that’s such a good idea.

Brook Lynn certainly isn’t the only employee at ELQ – and spreading the details of this highly sensitive deal could completely derail it. The company itself is going to suffer, not just Brook Lynn.

Still, striking a blow like this may be too tempting to pass up. In the end, it seems even Maxie may get on board with Lulu’s plan for payback. They both have a motive for wreaking havoc on their mutual enemy.

General Hospital spoilers say an unsuspecting Brook Lynn will answer phones at her desk. Nice of Brook Lynn to finally start doing her job – just in time for Michael Corinthos’ (Chad Duell) arrival, too! Michael will drop by with Wiley Quartermaine-Corinthos (Erik and Theo Olson) in Thursday’s episode and see how it’s going at ELQ without him.

GH viewers know Michael decided to take about a month or so off to focus on Wiley. Will Michael regret that decision after Brook Lynn’s big mistake? General Hospital spoilers say Brook Lynn’s bound to get an earful from Ned Quartermaine (Wally Kurth), but the buck stops with Ned himself.

Ned may be the one Michael lashes out at since it was Brook Lynn’s first day and she’s super flaky anyway.

As for Brook Lynn, she’ll have a fierce battle with Lulu eventually. Lulu will get so enraged that she pops open a bottle and gives Brook Lynn a Champagne shower! GH fans definitely won’t want to miss that.

Over with Brando Corbin (Johnny Wactor), he’ll be shirtless at the boxing gym when Damian Spinelli (Bradford Anderson) appears. Brando will grow curious over a comment Spinelli makes.

After Brando wonders if somebody needs rescuing, Spinelli will seem unsure about how to answer. Perhaps Spinelli won’t want to spill too much since this TJ Ashford (Tajh Bellow) situation is so risky.

Spinelli’s supporting Sam McCall’s (Kelly Monaco) search for TJ, so he may have more information on Thursday. Regardless, TJ is in grave danger. Jordan Ashford (Briana Nicole Henry) would prefer to keep anyone and everyone as far away from this drama as possible. TJ’s life depends on how Jordan handles things with Cyrus Renault (Jeff Kober).

Speaking of Cyrus, he’ll remain a hot topic for Sonny Corinthos (Maurice Benard) and Jason Morgan (Steve Burton). Sonny will push Jason to keep looking into something for him.

It’s crucial for Sonny to have all the facts – no matter what they prove. This may link to Harmony Miller (Inga Cadranel) and the suspicions surrounding her. Jason will likely prove Harmony’s connected to Cyrus soon enough.