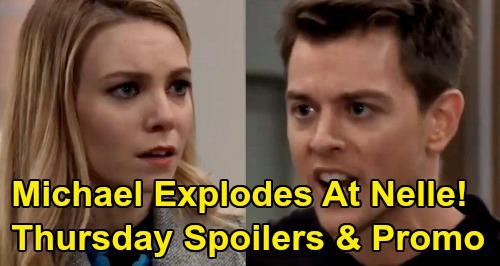 General Hospital (GH) spoilers for Thursday, March 26, tease that Damian Spinelli (Bradford Anderson) will remain in quite the predicament. He’s been busy spying on Delores Maloney (Andi Chapman) – and he actually uncovered some useful information. It turns out Delores is seemingly having an affair with a married city councilman, but Spinelli got busted during his latest covert operation.

On Thursday, Sam McCall (Kelly Monaco) will call Alexis Davis (Nancy Lee Grahn) to come help Spinelli out of his jam. Alexis will wonder if there’s any way Delores would consider dropping the charges, so we’ll see if Delores goes for the idea.

As for Sam, Spinelli will probably claim she wasn’t involved at all. Spin will want to keep Sam out of this if possible, although Delores should assume Sam was in on it.

Meanwhile, Laura Collins (Genie Francis) and Kevin Collins (Jon Lindstrom) will pay Neil Byrne (Joe Flanigan) a visit. Neil will be curious about their reasons – and they must have some good ones. Kevin and Laura will explain whatever their goal is and make a strong case for why Neil’s the perfect person to pitch in.

Other General Hospital spoilers say Nelle Benson Archer (Chloe Lanier) will push Michael Corinthos (Chad Duell) too far, which is exactly what she wants. Nelle has to sign off on Wiley Quartermaine-Corinthos’ (Erik and Theo Olson) elective heart surgery, but she’s causing problems as expected.

Monica Quartermaine (Leslie Charleson) recommended that Wiley have the procedure right away, but Nelle doesn’t think Wiley should have it at all. Despite Michael’s attempts to change her mind, Nelle ranted about them cutting her toddler open and refused to offer her signature.

GH spoilers state that this fight will quickly escalate on Thursday. Nelle will reiterate that she’s just exercising her parental right, but Michael will blow his top. He’ll yell that Nelle’s not going to have a say when she’s excluded from the custody arrangement.

Nelle will sport her usual “poor me” expression and act like Michael’s her bitter, belligerent ex – determined to cut her out of her son’s life. Perhaps Nelle can use this fight in court when the time comes. Regardless, Nelle will play the victim on Thursday and enjoy pushing Michael’s buttons.

Over with Jason Morgan (Steve Burton), he’ll bicker with Sonny Corinthos (Maurice Benard) about what’s next. Jordan Ashford (Briana Nicole Henry) reluctantly agreed to let her dead colleagues take the blame, but Sonny will want to talk about how Laura fits in.

Laura is a friend of Sonny’s, but she’s also the mayor and her duty to the people of Port Charles has to come first. As a result, Jason will want to leave Laura out of the loop entirely. Why give Laura even a hint about what’s going on with Jordan and Cyrus Renault (Jeff Kober)? It would only put Laura in a tight spot, so Sonny may ultimately back Jason up on this.

Elsewhere, Willow Tait (Katelyn MacMullen) will open up to Harrison Chase (Josh Swickard). They can tell Harmony Miller’s (Inga Cadranel) keeping a few secrets, which is nothing new for Harmony.

Willow’s used to Harmony’s shady behavior, but that behavior was previously due to Shiloh Archer’s (Coby Ryan McLaughlin) hold on his follower. This time Willow will think it’s about her.

Harmony is keeping Willow in the dark on her connection to Cyrus, but she dropped some hints that could mean Willow is Nina Reeves’ (Cynthia Watros) bio daughter as well. General Hospital spoilers say Harmony’s mysteries will continue to unravel – and the results could turn Willow’s life upside down!

As more updates become available, don’t forget to pop back in for other GH news. Do you think Harmony will meet a grim fate and kick off some major revelations for Willow? CDL will have other exciting General Hospital spoilers, news and updates to pass along.