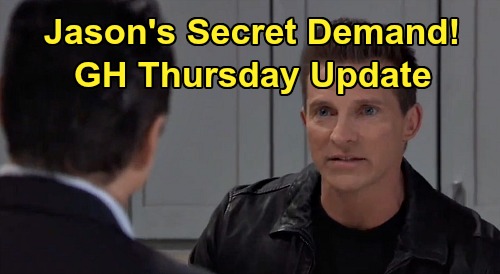 General Hospital (GH) spoilers update for Thursday, March 26, teases that Willow Tait (Katelyn MacMullen) will be feeling a bit reflective. Harrison Chase (Josh Swickard) will notice Willow seems troubled, so he’ll likely push her to share what’s on her mind. This should bring them back to the topic of Harmony Miller (Inga Cadranel), who’s clearly hiding things from Willow.

Harmony kept secrets for other reasons in the past – like to protect Shiloh Archer (Coby Ryan McLaughlin) and preserve his creepy agenda. However, Willow will suspect Harmony’s secrets are about her this time. Willow may feel like Harmony’s trying to shield her from something, which General Hospital fans know is true.

Whether Willow is indeed Nina’s bio kid or not, some bombshells are brewing. Speaking of bombshells, Jason Morgan (Steve Burton) won’t be interested in dropping any on Laura Collins (Genie Francis).

During a sparring session with Sonny Corinthos (Maurice Benard), Jason will argue that they have to keep Jordan Ashford’s (Briana Nicole Henry) situation quiet.

Jason won’t see any reason to even hint at what’s going on with Jordan and Cyrus. Now that Jordan is grudgingly going to throw her team under the bus, it’s best to keep Laura out of this. It’s crucial for Jordan to exonerate Cyrus and make him a murder target on the outside. The last thing they need is the mayor throwing off their plans!

In the meantime, Laura will show up to see Neil Byrne (Joe Flanigan) with Kevin Collins (Jon Lindstrom) by her side. Neil will wonder what the purpose of this meeting is, so Laura will dive right in. We know Laura will want to open a drug treatment clinic soon. This may be when Laura pitches the idea to Neil, who’ll eventually agree to help out with it.

Although Spinelli succeeded, he’s in hot water thanks to the latest charges against him. Alexis will wonder if those charges could possibly be dropped. She’ll try to nudge Delores into the idea on Thursday, which won’t be an easy task!

Nevertheless, Alexis will give it her best shot. Spinelli may be able to keep Sam out of his mess, but that won’t help her avoid Alexis’ fury later. At GH, tempers will continue to flare between Michael Corinthos (Chad Duell) and Nelle Benson Archer (Chloe Lanier).

Michael urged Nelle to sign off on Wiley Quartermane-Corinthos’ (Erik and Theo Olson) elective heart surgery immediately, but she refused.

Since Monica Quartermaine’s (Leslie Charleson) expert opinion means a lot to Michael, he’s trusting her to know what Wiley needs. Nelle, on the other hand, thinks there are other options. Monica’s a surgeon, so of course she’s going to suggest surgery – at least that’s how Nelle feels about it!

In reality, this is mostly a power trip for Nelle. She’ll love every minute of riling up Michael and getting him to make a big scene, which is indeed what’ll happen in Thursday’s episode. Michael will snap about how Nelle won’t get a say once she’s cut out of the custody arrangement.

Nelle will work this angle and many others as she keeps her eye on the prize. The goal is getting full custody of Wiley and keeping the Corinthos clan as far away as possible.

We’ll keep you posted as other GH news and updates surface. Will Nelle’s twisted tactics work out for her in court? CDL will have other thrilling General Hospital spoilers, news and updates to pass along, so be sure to pop in often.