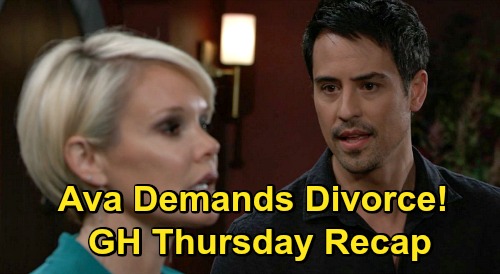 General Hospital (GH) spoilers recap for Thursday, October 22, reveal that Carly Corinthos (Laura Wright) woke up from a nightmare about Nelle Benson Jerome (Chloe Lanier), then she headed down to the Corinthos kitchen where she talked with Jason Morgan (Steve Burton).

Carly confessed that she had a nightmare, and that she keeps having weird feelings about Nelle not being done with her yet.

Carly also shared that Nina Reeves (Cynthia Watros) was planning a burial service today for Nelle at Woodlawn Cemetery, which Carly thought Nina was doing solely for herself.

Carly lamented about how she fell for Nelle in the first place and how she let Nelle into the family, and Carly told Jason that it was like there is something that she’s supposed to remember. Jason suggested that Carly not push it, and that whatever it was would come to her eventually.

Later, Jason was alone in the kitchen when Sonny Corinthos (Maurice Benard) arrived with news about Mike Corbin’s (Max Gail) will. Sonny revealed that Mike owned one fourth of a racehorse that he left to Sonny.

Sonny said that he’d buy out the other three owners and possibly race the horse. Sonny decided it was time to let Mike go and focus on the present.

Jason and Sonny discussed Brando Corbin (Johnny Wactor), who Jason said had reported for duty with Cyrus Renault (Jeff Kober) that morning. Sonny and Jason thought that Brando was safe for a while, but that ultimately Cyrus would test Brando’s loyalty.

Talk turned to how Cyrus probably wanted to move product through the hospital, and Sonny told Jason that if Cyrus broke the truce, then they’d take him out.

At the Metro Court, Harrison Chase (Josh Swickard) and Willow Corinthos (Katelyn MacMullen) continued their conversation by the bar.

Willow nearly told Chase that she and Michael Corinthos (Chad Duell) were annulling their marriage, but Chase stopped her from speaking.

Across the restaurant, Jasper “Jax” Jacks (Ingo Rademacher) asked Michael to pretend to talk with him while he watched Nina and Valentin Cassadine (James Patrick Stuart) talking at their table.

At the table, Nina needled Valentin for sleeping with Brook Lynn Quartermaine (Briana Lane), and Valentin needled Nina for her relationship with Jax. Valentin insisted that Jax really loved Carly, which irked Nina.

Soon, Michael broke free of Jax and approached Chase and Willow. The topic of Brook Lynn spending the night with Valentin came up, and Michael was appalled.

Chase noted that Brook Lynn was staying on his couch, and Willow said that it was good that Brook Lynn had Chase as a friend. Talk turned to Nelle’s burial, and Chase said that he was now considering attending, to face “Janelle” one last time.

Chase took off, and Michael and Willow talked a bit about Chase, with Willow insisting that she could never go back to Chase after how he betrayed her. Michael comforted Willow, and in a bit, he suggested that they study wines together for something fun to do.

Willow agreed, and she said that she and Michael were still married and that she’d honor the marriage as long as it lasted.

Jax kept watching Nina and Valentin bicker at their table about whether Nina was jealous of Valentin’s tryst with Brook Lynn. Nina and Valentin were arguing hotly when Jax rushed over to see if everything was ok.

Valentin said that they were just talking about Nelle, and Jax let it slip that Nina was paying to have Nelle buried. Valentin was horrified and tried to talk Nina out of it, but Nina got peeved and left to go the cemetery.

Jax sat down with Valentin, saying that he agreed with Valentin about Nina burying Nelle. Valentin switched gears and said that he knew that Jax was helping Nina search for her child.

Valentin wondered if Jax would help Carly do the same thing if it meant that Carly would get her heart broken. Valentin asked Jax if there was any part of his history with Carly that Nina couldn’t know, and Jax got upset and left.

“What are you hiding?” Valentin asked himself afterwards.

At Wyndemere, Nikolas Cassadine (Marcus Coloma) urged Ava Jerome Cassadine (Maura West) to quit talking and just listen to what he had to say. Ava kept needling Nikolas and being flippant, and finally Nikolas blurted out that he had inconvenient feelings for Ava.

Nikolas admitted that he’d fallen for Ava, and Ava was stunned. Nikolas wondered if Ava felt the same, but Ava wouldn’t answer, as she flashed back to finding the check fragment with Nikolas’ signature on it.

Ava brought up Elizabeth Baldwin (Rebecca Herbst), wondering if Nikolas had feelings for her that cropped up during their marriage. Nikolas admitted that he did have fleeting thoughts about Elizabeth, but that he and Elizabeth were in the past.

Ave continued acting like Nikolas was trying to put one over on her, and she refused to say whether she had feelings for Nikolas. “I got my answer,” Nikolas smiles. “Believe what you like,” Ava said.

Nikolas said that he wanted Ava to believe him, and Ava announced that actions speak louder than words. Nikolas asked what he could do to prove himself, and Ava said that if he wanted to prove his feelings for her, then he should divorce her.

At the cemetery, Nina and an officiant stood at Nelle’s gravesite. The officiant offered a few words, and suddenly Chase appeared, surprising Nina completely.

After the graveside service, Nina told Chase that she was glad that he changed his mind. Chase said that if it weren’t for Nelle, then he’d still be a cop in Maine, so in the end he benefitted. Chase thought that he could put Nelle behind him now.

Nina argued that Nelle could have accomplished a lot if just one person had believed in her, and Chase responded by saying that Nelle was fooling Nina in death. Chase said that Nelle was broken and couldn’t accept kindness or support, let alone love.

Nina said that Nelle didn’t have anyone, and that she hoped Nelle rested in peace.

Chase took off, and Nina talked to Nelle’s headstone, saying that Nelle didn’t deserve the life she had. Suddenly, Nina looked up and Carly was standing there. Nina stood up and came face-to-face with a defiant-looking Carly.

That was a terrific episode of General Hospital, and there’s plenty more coming tomorrow, so stay tuned! We’ll give you ongoing updates as more GH news comes in. Stick with the ABC soap and don’t forget to check CDL frequently for the latest General Hospital spoilers, daily episode recaps, and news.