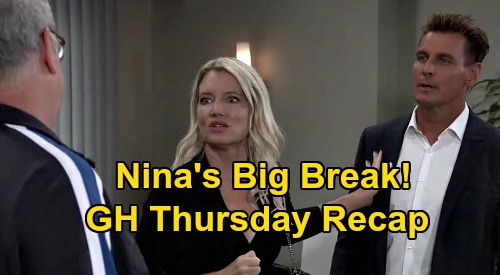 General Hospital (GH) spoilers recap for Thursday, September 10, reveal that Elizabeth Baldwin (Rebecca Herbst) and Nikolas Cassadine (Marcus Coloma) talked in the park. Elizabeth told Nikolas that his marriage was ruining hers. Elizabeth went on about how she and Franco Baldwin (Roger Howarth) loved each other, but Nikolas could tell that Elizabeth was having doubts.

Elizabeth revealed that she and Franco argued about Nikolas quite a bit, especially now that she’s forgiven Nikolas. Nikolas was happy that Elizabeth had forgiven him, and they talked about the past and their history together.

Elizabeth went on, saying that Franco was making unsettling accusations against Nikolas, and that Ava Jerome Cassadine (Maura West) had dredged up Franco’s past.

Nikolas and Elizabeth kissed, and while they did, someone snapped a picture of the kiss from afar.

Elsewhere in the park, Josslyn Jacks (Eden McCoy), Dev Corbin (Ashton Arbab), and Cameron Webber (William Lipton) chatted about the homecoming dance and about going off to college.

Joss took off for Turning Woods to see Mike Corbin (Max Gail), and Cameron told Dev that he thought Joss liked him as more than a friend. Dev smiled knowingly.

At Ava’s gallery, Franco and Ava talked about Franco re-doing Ava’s portrait. Franco had some big ideas for re-imagining the portrait, but then he said that he wasn’t sure that he could do that to Elizabeth.

Ava thought that Elizabeth should get over herself and support her husband’s passion, and that maybe Elizabeth didn’t want Franco to succeed as an A-list artist.

Franco noted how supportive Ava has been of him over the years, and he thought that Ava deserved a lot better than Nikolas. Ava quipped that according to Nikolas, she’s a conniving, greedy wife, and that she was tired of living up to expectations.

Franco said that he thought Ava was good the way that she was, and they kissed. From afar, someone snapped some pictures of the kiss.

Robert didn’t know how he’d forget Holly, and he flashed back to some old times with her. “She was one of a kind,” Robert said. Olivia supported Robert, and when she stepped away for a moment, Robert’s phone rang. It was Holly’s voice calling out and asking him for help.

Robert immediately called someone at the bureau to trace the number, and Olivia came back and learned what had happened. Robert vowed to find out what was going on, and whether it was a real call from Holly or perhaps a recording sent by someone else to trick him.

Soon, Robert learned that the call came from Monte Carlo. Olivia insisted on going with Robert to Monte Carlo, and she left Ned Quartermaine (Wally Kurth) a voicemail message saying that some developments have come up and that she’d explain everything later in person.

In Brooklyn, Jasper “Jax” Jacks (Ingo Rademacher) and Nina Reeves (Cynthia Watros) stood outside the apartment of the jeweler who fashioned the clasp on her half-heart necklace.

Nervously, Nina knocked on the door, and after showing the quirky jeweler the necklace, he identified the chain as being from his shop. The jeweler also remembered a lady asking for the heart pendant to be cut in half.

Nina showed the jeweler a photo of Madeline Reeves (Donna Reed), but the jeweler didn’t recognize her. The jeweler went to the back room and located a receipt for the necklace, which he gave to Nina and Jax.

Nina and Jax left, and Nina said that the receipt listed the name Phyllis Caufield. “Do you recognize the name?” Jax asked. “I do,” said Nina.

Stella went in to sit with Mike and talked to her old friend, saying that a lot of people loved him. Mike turned and looked at Stella, and Stella said she was glad to see him. Stella reassured Mike, telling him that everything was going to be all right.

In the lobby, Sonny caught up with Carly Corinthos (Laura Wright), who was talking with Ned. Carly went off to see Stella, and Ned told Sonny about Olivia going to Geneva to see Dante Falconeri (Dominick Zamprogna).

Sonny thought that there was no way to stop Olivia from going, and Ned wholeheartedly agreed. Ned told Sonny that he was sorry to hear about Mike, and Sonny said they were making the most of the time that Mike had left.

In the hallway outside Mike’s room, Josslyn arrived to greet Stella and Carly. Stella said that Mike may not be responsive, but that she was confident that he could sense their love. Josslyn, Stella, and Carly went into Mike’s room, followed shortly by Sonny. Mike then had trouble breathing, and Josslyn went to get the nurse.

Later, the nurse revealed to everyone that Mike had pneumonia and that they were putting him on oxygen, while Stella talked softly to Mike asking him to hang on a little longer so his family could say goodbye.

Stella went out to see everyone in the hallway, and Sonny asked Stella if this was the end. Stella said yes, that it was time for everyone to say goodbye to Mike.

There’s definitely a lot going on right now on General Hospital, so stay tuned! Stick with the ABC soap and don’t forget to keep CDL at the ready so you don’t miss any of the latest General Hospital spoilers, daily episode recaps, or news.