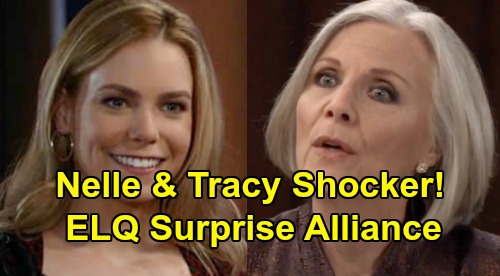 General Hospital (GH) spoilers tease that a dangerous alliance could form. GH fans know Ned Quartermaine’s (Wally Kurth) suspicious of Tracy Quartermaine’s (Jane Elliot) sudden interest in ELQ. He’s not buying that Tracy came back to spend time with her family and make sure the company was in good hands.

When Ned pushed the issue, Tracy suggested she wasn’t making a power play – but someone else was. Of course, who is Tracy kidding? If power’s up for grabs, she’s going to want some. Tracy always think she knows best, and she feels Michael Corinthos (Chad Duell) is neglecting ELQ right now.

As for the other person working an ELQ angle, this could be a setup for a Tracy and Nelle Benson (Chloe Lanier) partnership. Nelle’s hoping to get her hands on Shiloh Archer’s (Coby Ryan McLaughlin) shares, so there’s the potential for her to team up with Tracy.

What an interesting duo they would make! Nelle and Tracy could work together to gain control of ELQ, which would obviously cause an uproar.

When Brook Lynn Quartermaine (Amanda Setton) revealed that Nikolas Cassadine (Marcus Coloma) was alive, Tracy replied, “So?” That reaction summed up her regard for other people’s drama in general.

It’d probably be Tracy’s same reaction to Michael and the Corinthos family’s suffering – at least if she feels an alliance benefits with Nelle her personally.

It’s not like Tracy’s been around to see Nelle’s sinister side in action. Hearing stories isn’t the same as seeing Nelle carrying out her twisted tricks. To Tracy, Nelle would certainly look like someone she could handle.

In fact, this potential partnership would bring risks on both sides. You can bet Tracy and Nelle would be tempted to turn against each other.

As manipulative as Nelle is, she’d probably be no match for Tracy. If anyone can put Nelle in her place, it’s Tracy Quartermaine!

Nelle might get burned and left with nothing if she decides to take this gamble. It’s doubtful being in cahoots with Tracy would be the lucky break it seemed to be!