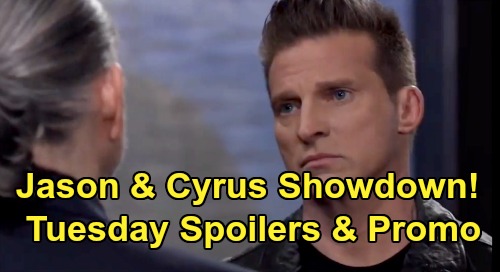 General Hospital (GH) spoilers for Tuesday, April 7, tease that Carly Corinthos (Laura Wright) will reach her breaking point. During a conversation with Michael Corinthos (Chad Duell) and Sasha Gilmore (Sofia Mattsson), Carly will be riled up and ready to take action. Nelle Benson Archer (Chloe Lanier) is pushing Carly to her limit, so Carly will determine that enough is enough.

Michael may worry about Carly about making matters worse, but she’ll feel like this is something she has to do. Carly will contend that this started with her, so she’s going to be the one to finish it.

Of course, Carly should know by now that arguing with Nelle accomplishes nothing. If Carly wants to stop Nelle from winning the custody battle, she’ll have to think bigger than another round of bickering.

At Crimson, Willow Tait (Katelyn MacMullen) will walk in and notice the necklace Nina Reeves (Cynthia Watros) is holding. It’ll leave Willow taken aback, so we know what General Hospital writers want fans to think here. They’re hoping to make viewers believe Willow has the other half of the necklace and is Nina’s long-lost daughter.

However, GH included this Willow clip in both Tuesday’s preview video and the weekly promo. Would they really give away the end of the story like that? It seems far more likely this is a fake-out, especially since a major secret involving Nelle will come out in a special Carly episode later this week. There’s a good chance that’ll tie in with Nelle having the half-heart pendant necklace as a young girl.

After TJ’s dumped in front of GH, Jordan Ashford (Briana Nicole Henry) will be both relieved and concerned. Although TJ will be alive, he’ll still be unconscious, bruised, scarred and left battling a head injury.

Thankfully, TJ will be rushed inside for the treatment he needs. As Jordan and Curtis Ashford (Donnell Turner) sit by TJ’s bedside, they’ll discuss this horrible ordeal.

Jordan will see the damage that monster Cyrus did to her son and will vow to kill him! It sounds like Curtis will have to settle Jordan down and remind her that murder isn’t the answer – at least not by Jordan’s gun.

Jason Morgan (Steve Burton), on the other hand, is all set to kill Cyrus and end this nightmare. Sonny Corinthos (Maurice Benard) told Jason to go ahead if he could get a clean shot, but it seems Jason will have to hold off.

In Tuesday’s episode, Cyrus will approach Jason and suggest that this meeting is long overdue. It looks like some threats will be exchanged as this war heats up.

Other General Hospital spoilers say Sonny will drop by Brando Corbin’s (Johnny Wactor) auto garage to offer a warning. Now that Cyrus is on the loose, Sonny will want to give Brando updates and tell him to watch his back. They can’t be too careful when it comes to someone as ruthless as Cyrus.

Back with TJ, Harrison Chase (Josh Swickard) will wonder if he can identify his kidnappers. After TJ’s awake and a little less foggy, we’ll see what he can remember.

Elsewhere, Sam McCall (Kelly Monaco) will also give Molly some big news. Molly will be stunned as Sam insists they have to get to the hospital. It won’t be long until Molly hears the whole terrible story and realizes TJ wasn’t ghosting her at all.

GH fans can expect a sweet reunion for TJ and Molly, which will include a new proposal. TJ will think they should ditch the marriage idea and just enter into a domestic partnership.

Although Molly will claim that sounds perfect, she’ll be torn deep down. A lot’s changed for Molly while TJ’s been gone, so more changes should be brewing.

It sounds like some exciting scenes are coming up. CDL will have more hot shockers to read up on, so be sure to stop by often for the latest General Hospital spoilers, news and updates.

“Nelle is evil. Promise me you’ll stop her.” #GH pic.twitter.com/g5NrFe8OcD