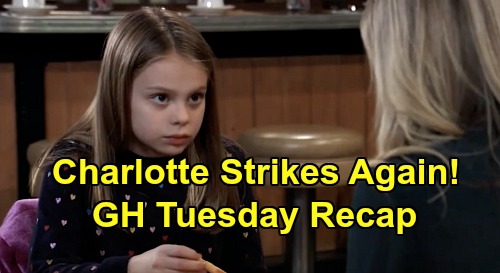 General Hospital (GH) spoilers recap for Tuesday, February 11, reveal that Jason Morgan (Steve Burton) and Sam McCall (Kelly Monaco) met secretly in an exam room at the hospital. Hamilton Finn (Michael Easton) followed shortly thereafter, and after a brief exchange, he offered to give them information on Peter August (Wes Ramsey), so long as they let the authorities decide how to handle Peter from there.

Jason and Sam agreed, and so Finn told them all about how Peter was connected to the gunman who tried to kill Franco Baldwin (Roger Howarth) and Andre Maddox (Anthony Washington) through a shell company called Eurotech.

Meanwhile, at the Jerome gallery, Trina Robinson (Sydney Mikayla) quizzed Ava Jerome (Maura West) about why she married Nikolas Cassadine (Marcus Coloma), saying that she was concerned about Ava. But Ava reassured her that she knew what she was doing.

Franco then arrived and hugged Ava, then wondered what on earth she was doing with Nikolas. Ava deflected, then asked him to paint a portrait of her for above the mantlepiece at Wyndemere. Franco balked at this and never officially said yes, even though Ava pressed him to do it. She then kissed his cheek, which Trina snapped a picture of.

Lulu sent Charlotte off to the counter for hot chocolate and then blasted Valentin for trying to get a visit in without prior permission. Valentin gloated that soon his legal troubles would be behind him, and he continued to berate Lulu while Charlotte eavesdropped from the counter.

Franco then arrived and started sketching Ava’s portrait at the counter. Charlotte noticed and said that she knows that lady – and that she lived at her house now. Meanwhile, Lulu and Valentin kept bickering at their table, and Charlotte hugged her dad as he got up to leave.

She then walked back to the counter while Franco and Elizabeth Baldwin (Rebecca Herbst), who just arrived, spoke a few feet away.

Lulu and Charlotte then left together, with Charlotte telling her mother, “Why don’t you just admit it – you and Papa hate each other.” She also said that if it weren’t for certain people, then Papa would be married to Nina Reeves (Cynthia Watros) and everything would be the way it’s supposed to be.

And after they had gone, Franco went back to his sketch of Ava, only to find that someone had drawn a pink mustache on it.

At the hospital, Nikolas arrived and encountered Elizabeth, followed shortly by Franco, who wanted a word with Nikolas. Franco needled Nikolas about Hayden Barnes’ (Rebecca Budig) disappearance and the men argued until Elizabeth broke it up.

Franco then left, and Alexis Davis (Nancy Lee Grahn) showed up and spoke to Nikolas – she was there to provide a control sample for the DNA tests on Valentin.

After Alexis’ blood draw, she agreed to stay and make sure that Valentin got tested, so Nikolas took off. Valentin then walked up and thanked Alexis for providing her blood sample.

Alexis wondered why Valentin was even complying with the DNA test, and Valentin insisted that the codicil was a fake and all a twisted joke of Helena Cassadine (Constance Towers). He then went off to give his blood sample.

Nikolas arrived at the Jerome Gallery and glibly shared with Ava that today’s the day that Valentin will get his comeuppance. Trina then showed him the photo of Ava kissing Franco, and he was very interested in that.

Trina wondered if she should share the photo to the gallery’s social media page, and Ava agreed. Nikolas looked mischievous as Ava told him about the portrait that she just had commissioned.

Next, at Turning Woods, Brook Lynn Quartermaine (Amanda Setton) encountered Sonny Corinthos (Maurice Benard) as she tried to get in to see Mike Corbin (Max Gail). Sonny said that Mike wasn’t up to it, but soon Mike walked in the room and appeared to recognize Brook Lynn.

Mike was happy and talked with Brook Lynn happily, then called her “Lois” and asked her to introduce him to Sonny.

Brook Lynn and Sonny then went back to Sonny’s office and talked. Turns out, her aunt passed of Alzheimer’s a year ago, so she has some experience with the disease. Sonny mentioned the clinical trial option for Mike and explained that the first one had fallen through.

Sonny asked whether Brook Lynn thought that it was too late for Mike. Brook Lynn again referenced her aunt who passed last year, and she noted that most of the relatives stopped visiting toward the end because it was too painful to see her that way.

She said that for now, Mike can still talk and tell stories, but that he couldn’t force a miracle. She thought that Sonny should open himself to Mike while he’s still here.

Meanwhile, at Anna’s place, she opened the door to Peter, and Robert asked how long he had been standing there. Peter pretended like he hadn’t heard their argument through the door and asked for Robert’s statement for the Invader on the latest mob shootings.

Robert had no comment, starting an argument between the men. Ultimately, Anna made Robert leave.

Anna then lamented about how Robert would only ever see him as Cesar Faison’s (Anders Hove) son. Peter said that Robert would always doubt him no matter what he does to prove that he’s a changed man.

Anna said that she could see how hard Peter was trying, and that anyone who doubts that he’s a good man would have to answer to her. Peter appreciated her support and left on a mission.

Once outside and alone, Peter made a call to someone saying that he needed the person to make a call to the federal prosecutor who put Sam in prison. He then gave his instructions to the person offscreen.

Back inside, Anna perused the evidence linking the OR gunman to Peter, then hit it away in a book. Finn walked in with a huge bouquet of flowers and they noted that they hated it when things were tense between them.

They chatted a bit about parenthood and having to think about Violet Barnes (Jophielle Love) now, then Anna told Peter about Robert and Peter’s argument earlier.

Anna noted that she just wanted to be honest with Finn, and she urged him to keep an open mind about Peter. Finn looked terribly guilty as Anna said that they were on the same team and that they could get through this together.

At GH, Robert joined Jason and Sam, who immediately told them that they had information about Peter, and that they could link him to the OR gunman. Robert wondered where the information came from, but Sam and Jason wouldn’t cough up their source.

Robert then left to go call the Federal prosecutor. Sam and Jason hoped that this nightmare was finally over for them, but Robert soon came back in the room and announced that the deal was off.