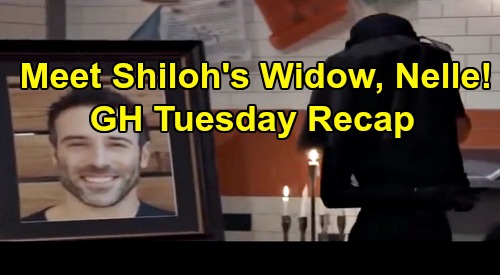 General Hospital (GH) spoilers recap for Tuesday, January 14, reveal that Alexis Davis (Nancy Lee Grahn) and Neil Byrne (Joe Flanigan) continued their conversation at Alexis’ place, as Neil explained that he’s in danger of losing his medical license over their relationship. He said that someone found out about their personal relationship, and that he planned to throw himself at the mercy of the medical board.

Alexis said she couldn’t be the reason why he loses his career, while he protested that he wants to explore their relationship further. Ultimately, she was uncomfortable with that, and Neil said that he wished things could be different and that they shouldn’t have contact with each other before the board meets to decide his fate. Neil then left, leaving Alexis deflated.

Meanwhile, at the Floating Rib, Dustin Phillips (Mark Lawson) tried to subdue Brook Lynn Quartermaine’s (Amanda Setton) producer, Linc (Dan Buran), who protested that he and Brook Lynn had unfinished business. He went on about the contract, and then made a lewd remark, prompting Dustin to punch him. An all-out brawl then occurred.

At the Metro Court, Michael Corinthos (Chad Duell) and Willow Tait (Katelyn MacMullen) prepared for the upcoming memorial service for Shiloh Archer (Coby Ryan McLaughlin). Harrison Chase (Josh Swickard) and Jason Morgan (Steve Burton) showed up as well. After it was established that Sam McCall (Kelly Monaco) and Kristina Corinthos-Davis (Lexi Ainsworth) weren’t going to attend the service, Chase got called away to the brawl at the Floating Rib.

Across the room, Curtis Ashford (Donnell Turner) called Stella Henry (Vernee Watson) for advice on helping Jordan Ashford (Briana Nicole Henry) with her old friend’s death. Thinking she’s still in London, he wished Stella was here, and she suddenly hopped off the elevator, surprising him.

At the memorial service, Willow asked Daisy Kwan (Kelsey Wang) whether she arranged the service, but Daisy was chilly toward her. Lorraine “Harmony” Miller (Inga Cadranel) arrived, and she, Willow, Jason, and Michael stood at the back of the room as the service began. Daisy said a few tearful words about Shiloh, then asked if anyone else wanted to say a few words. Willow said she did.

Willow then proceeded to rip on Shiloh, saying that he wanted to help himself to everyone’s money, bodies, and self-esteem. She went on about how he wanted to own and humiliate people, and finally she turned to his picture and told him to rot in hell. At this point, a woman wearing a black veil said that was enough, and now it was her turn.

The woman said that she didn’t know Shiloh very long, but that they did share a special bond…after all, he was her husband. She took off the veil, revealing herself to be Nelle Benson (Chloe Lanier). Michael, Willow, Harmony, and Jason all looked horrified.

Back at the Floating Rib, the altercation got bigger, with Brook Lynn and Lulu getting in on the tussle. Chase and some cops entered and attempted to break the fight up, and as she tried to hit Linc over the head with a beer bottle, Brook Lynn accidentally hit Chase over the head, enraging him. Afterwards, Chase and the cops subdued everyone and informed them that he was hauling them all to the PCPD.

Next, at the police station, Laura Collins (Genie Francis) spoke with Jordan about her intentions to revitalize the waterfront. Jordan let Laura know that they were looking into revisiting the investigation into Nikolas Cassadine (Marcus Coloma), but that it was unlikely that charges would be filed.

Later, Curtis visited Jordan, who had stood him up for dinner earlier. Jordan was apologetic but was also happy to see Stella with Curtis. Curtis then made a lame excuse and left, leaving Jordan to guess that he wanted Stella to talk with her. Stella comforted Jordan over the death of Bob Massicotte (Randy J. Goodwin) and warned her that obsessing over his death won’t bring him back.

Soon, Brook Lynn, Lulu, Linc, and Dustin flooded the police station as Chase brought then all in. Brook Lynn later offered a lame apology to Chase, who was still upset about getting hit over the head, while Lulu and Dustin sat in the interrogation room. Lulu asked how Dustin knows Brook Lynn.

Finally, at the Quartermaine mansion, Tracy Quartermaine (Jane Elliot) told Ned Quartermaine (Wally Kurth) that someone out there is making a play for ELQ but she doesn’t know who it is – they presented themselves as investors, but she thinks they’re actually intermediaries. Turns out, they went after Luke Spencer (Anthony Geary) next.

Laura then arrived, interrupting their conversation. Laura wanted to see if ELQ would be interested in a public/private partnership for her waterfront revitalization project. This puzzled both Ned and Tracy, since Laura previously opposed the idea when it was part of Ned’s mayoral platform. Laura said that she had changed her mind on the idea, and that she wanted to revitalize all of the piers above pier 26.

Ned and Tracy cautioned that her idea, while it would be a win-win for the city and for ELQ, would be bad for people on the wrong side of the law, like Sonny Corinthos (Maurice Benard). Laura realized that this could be a difficult conversation for Michael, so she wondered if Ned had advice on how to approach him. Tracy piped up and said that she should be patient because Michael might not be in charge for long. At that point, both Laura and Ned got calls from the police station.