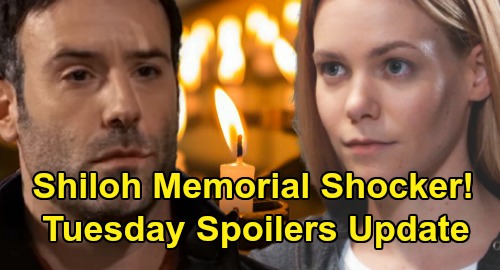 General Hospital (GH) spoilers update for Tuesday, January 14, teases that Laura Webber (Genie Francis) will show a mother’s unconditional love. Laura really ran the emotional gamut after she realized Nikolas Cassadine (Marcus Coloma) was alive and had returned. Her shock quickly became relief and joy, but all that led to outrage over her son’s deception.

Laura even gave Nik a good slap, so she obviously disapproves of his actions. Nevertheless, Laura will tell Jordan Ashford (Briana Nicole Henry) that she loves Nik no matter what he may have done. She can’t turn her back on Nikolas because of his mistakes, so she’ll stand by him and try to repair her family.

Other General Hospital spoilers say Willow Tait (Katelyn MacMullen) will grill someone about Shiloh Archer’s (Coby Ryan McLaughlin) memorial service. Whether that’s Daisy Kwan (Kelsey Wang) or perhaps another Dawn of Day follower, Willow will be curious if this woman arranged this event.

All the guests should be floored when they learn who’s actually responsible. Nelle Benson (Chloe Lanier) is set to confess something shocking at this gathering. She’ll likely reveal that she’s now free and planned this memorial service to honor her dead husband.

Nelle’s big announcement will cause total chaos, which could be why Harrison Chase (Josh Swickard) stops a fight on Tuesday.

GH fans will see more mayhem at The Floating Rib, too. Brook Lynn Quartermaine’s (Amanda Setton) shady manager just showed up and made it clear she wasn’t getting out of her contract. He has no intention of letting Brook Lynn perform or escaping his sleazy clutches.

After Dustin Phillips (Mark Lawson) pulled the guy off Brook Lynn, it didn’t take long for her to recognize “Dusty.” Dustin seemed stunned to see Brook Lynn, who he seemingly had a relationship with at one time.

Lulu Spencer (Emme Rylan) should learn the story of how these former flames came together soon enough. She’ll definitely demand answers from Dustin!

Brook Lynn, on the other hand, will be more interested in this gig she booked. She’ll refuse to listen to this manager creep and will take the stage for her performance.

When Ned sticks to his guns, Tracy will rant about an important family lesson. She’ll think it’s something Brook Lynn needs to learn as well. After the conflict escalates, Tracy will end up throwing Ned right out of the mansion. It’s nice to have Tracy back for fun outbursts like this one.

Next, Curtis Ashford (Donnell Turner) will hope for some relationship advice. Stella Henry (Vernee Watson) is supposed to pop back up this week, so maybe she’ll be the one Curtis seeks help from. Whatever the case, Curtis might have concerns if Jordan lets him in the loop on her mysterious partner.

Jordan asked someone to head over to PC and help her with the Bob Massicotte case. She trusts this man a great deal – and it seems they used to have a little romance going on. The idea of them working on an investigation together while Curtis gets shut out…well, that may not exactly appeal to Curtis!

It sounds like Curtis will need a pep talk about trust and how important it is in a relationship. As for Neil Byrne (Joe Flanigan), he’ll reassure Alexis Davis (Nancy Lee Grahn) after that bomb he just dropped on her.

Neil’s losing his medical license thanks to Alexis, so she’ll be heartbroken. Alexis will feel like it was a mistake to ever cross the line, but Neil will hint that he wants to keep making that mistake.