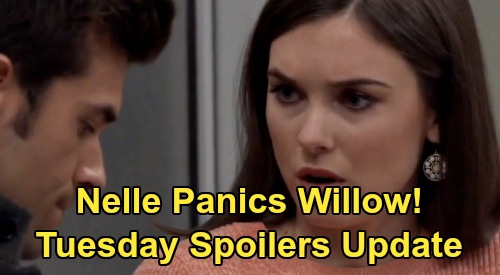 General Hospital (GH) spoilers update for Tuesday, March 17, teases that Harmony Miller (Inga Cadranel) will find herself on the hot seat. At the garage, Jason Morgan (Steve Burton) and Brando Corbin (Johnny Wactor) were just startled by a noise. In classic Jason fashion, he drew his weapon and seems ready for anything. Jason will certainly be taken aback when Harmony comes waltzing in!

Harmony will be just as surprised to see Jason, so she’ll ask what he’s doing there. Jason will wonder the same thing, so Harmony will have to answer some tough questions.

You can bet that’ll involve some lies, but Jason will probably see right through them. This could launch Jason’s investigation and help him ultimately figure out Harmony’s connected to Cyrus Renault (Jeff Kober).

As for Sam McCall (Kelly Monaco), she’ll have some news to deliver. Jordan Ashford (Briana Nicole Henry) will ask if Sam came up with anything, so Sam will reveal what she knows.

Of course, it’ll probably be too much as far as Jordan’s concerned! Sam should just be trying to help with all the T.J. Ashford (Tajh Bellow) drama, but Jordan can’t risk having anyone else involved.

General Hospital spoilers say Jordan will warn Sam to stop digging, but Sam may not be willing to listen. Over with Portia Robinson (Brook Kerr), she’ll hear a proposal from Carly Corinthos (Laura Wright).

Trina Robinson (Sydney Mikayla) is a dear friend of Josslyn Jacks (Eden McCoy), so the whole Corinthos clan loves her. Carly may have some way of offering extra support to Trina during this difficult time.

Trina’s still trying to cope with the loss of her father, Marcus Taggert (Real Andrews), but Portia isn’t keen on accepting outside assistance. She’ll reject Carly’s offer, but Carly will let her know it stands – just in case Portia changes her mind.

Meanwhile, Cameron Webber (William Lipton) will share some sweet moments with Josslyn Jacks (Eden McCoy). He’ll reflect on his traumatic ordeal and the last thing he wished for.

Cameron may mean before he thought death was near! This would be a good opportunity for Cam to come clean about his true feelings for Joss, but we’ll see just how far he takes this.

Other GH spoilers say Harrison Chase (Josh Swickard) will have some unsettling updates for Willow Tait (Katelyn MacMullen). Willow will sense something’s wrong right away, so she’ll likely assume this pertains to Wiley Quartermaine-Corinthos (Erik and Theo Olson). Wiley isn’t Willow’s biological son, but he’s still in her heart and remains her priority.

However, that was before Diane did a background check on Sasha Gilmore (Sofia Mattsson) and realized how much ammo Nelle’s lawyer would have. Diane determined it’d be better for Michael to not marry at all if Sasha was his only option.

Willow might hear about that problem or perhaps a new one. Michael will tell Sasha that there’s nothing Diane can do, so this could mean another round of trouble. Nelle could score temporary visitation and leave Michael even more concerned for Wiley’s safety. That would definitely rev up Willow’s worries as well.

General Hospital spoilers say Carly will eventually rope Sasha into a sneaky plan. Although Sasha’s a good person, Carly knows she’s got a little bad in her – just enough to hopefully beat Nelle at her own game! With Sasha’s help, Carly will count on gaining the upper hand.

Finally, Neil Byrne (Joe Flanigan) and Alexis Davis (Nancy Lee Grahn) will awkwardly cross paths. Their short-lived romance caused quite a mess, but Alexis and Neil will agree they’d do it all over again in a heartbeat.

They at least got to experience a steamy night together, but can they contain their burning desires? Something tells us they won’t make it the two years they’re required to wait, so stay tuned.