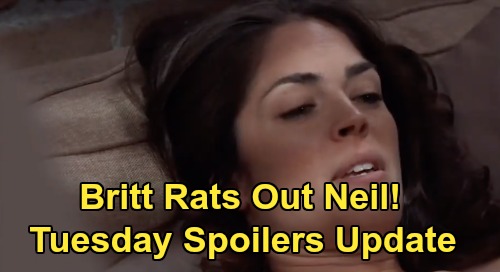 General Hospital (GH) spoilers update for Tuesday, March 31, teases that Jordan Ashford (Briana Nicole Henry) will spill a secret, but she won’t tell the whole story. GH fans know Jordan’s been reluctant to let her team take the fall. Jordan was also involved in the plot to frame Cyrus Renault (Jeff Kober), so this is certainly a hard step for her to take.

However, Jordan apparently got reassurance from someone over the phone. There’s a good chance that someone is Marcus Taggert (Real Andrews), who could easily have faked his death to protect himself as well as his family.

Whatever the case, Jordan will indeed drop the bomb on Tuesday. She’ll tell the detective from Internal Affairs that her team conspired to tamper with the evidence and set up Cyrus.

Over with Portia Robinson (Brook Kerr), she’ll get fed up with all Curtis Ashford’s (Donnell Turner) questions. Curtis will keep Portia on the hot seat when it comes to Taggert and how much she knew about his dealings.

Portia won’t see why this is still relevant, but Curtis will want to know as much as possible. If Portia knows Jordan was in on the scheme, there could be big trouble!

Other General Hospital spoilers say Mac Scorpio (John J. York) will mull things over with Laura Collins (Genie Francis). Laura will want to know what’s up, but Mac may not have much of a scoop yet.

The details surrounding Jordan’s latest move will come out soon enough, but she has to rat out the team first. In the meantime, Mac can share what he’s learned so far and ponder what’s ahead with Laura.

Next, Cameron Webber (William Lipton) and Trina Robinson (Sydney Mikayla) should talk about their recent kiss. Unfortunately, it’s doubtful they’ll be on the same page about it – at least not deep down.

When Cam opened up to Franco Baldwin (Roger Howarth), he had lots of sweet things to say about Trina. Despite Cameron’s feelings for Josslyn Jacks (Eden McCoy), he’s starting to like Trina, too.

As Franco mentioned he started out friends with Elizabeth Baldwin (Rebecca Herbst) before they took a chance on each other. Cam seemed poised to potentially give Trina a chance, but Trina got the opposite advice from Ava Jerome (Maura West).

Ava doesn’t want Trina competing with someone if she doesn’t have to. She suggested Trina should fight for Cam if the kiss meant something, but otherwise the time to back off is now.

Trina and Cam may end up brushing the kiss under the rug for now. Their feelings for each other probably won’t stay buried, but they can pretend for a while longer! General Hospital spoilers say the topic of therapy will also come up on Tuesday. Trina will ask if Cameron really thinks he needs a therapist, so he’ll explain how his latest session went.

Cam will likely admit that Neil Byrne (Joe Flanigan) helped him see things in a new light. With any luck, perhaps Trina will be motivated to seek some therapy herself. Trina may need it even more after Jordan tarnishes Taggert’s reputation!

Other General Hospital spoilers say Neil will offer his assistance to Alexis Davis (Nancy Lee Grahn). After Neil runs into Alexis and senses that she’s upset, he’ll hope he can comfort her somehow. Alexis will also manage to spark concerns for Hamilton Finn (Michael Easton), who might hear that Alexis has fallen off the wagon.

Brad Cooper’s (Parry Shen) stuck behind bars, so Britt’s lost someone who doesn’t judge her. She may admit that’s one reason she likes the casual arrangement she’s got going with Julian. They’re in no position to judge each other.

However, Julian will soon be in a position to judge Neil! General Hospital spoilers say a surprising character saw Neil and Alexis outside that hotel room in New York. It seems likely that was Britt since she had a flash of recognition at GH. When Britt and Neil first met, Britt had a feeling she’d seen him somewhere before.

It was probably in that hotel corridor – although there might’ve been somewhere else as well. Whatever the case, Julian will learn something that leaves him enraged.

There must be a bit more to the story here – or Britt will at least frame it in a way that leaves Julian disturbed. One way or another, Julian will wind up attacking Neil and causing a whole lot of drama.

Speaking of drama, Lulu Spencer (Emme Rylan) will hope to cut down on some of it. Since Lulu’s conflict with Brook Lynn Quartermaine (Amanda Setton) has gotten out of hand, Lulu will think maybe she should make amends. It sounds like Lulu will try to be the bigger person, but Brook Lynn won’t be in the mood to put their past issues to rest.

Brook Lynn will also get interrogated about her deal with Linc Brown (Dan Buran). When Brook Lynn updates Ned Quartermaine (Wally Kurth) about wiggling out of her contract, he’ll instantly grow suspicious. Ned will realize Brook Lynn must’ve given Linc something to make him back off, so he’ll want the details.

General Hospital spoilers say Brook Lynn will admit she gave up her ELQ shares – and she may not be a bit sorry about it. Ned and the rest of the fam left Brook Lynn fuming when they stood against her. This was Brook Lynn’s shot at proving a point and getting out of that horrible contract.

Brook Lynn may battle regrets once Valentin Cassadine’s (James Patrick Stuart) plot is revealed, but she should be pretty content with her decision for now. It’s Ned who’ll flip out over Brook Lynn’s big news! CDL will have plenty of great General Hospital spoilers, news and updates posts to check out, so be sure to drop by again soon.