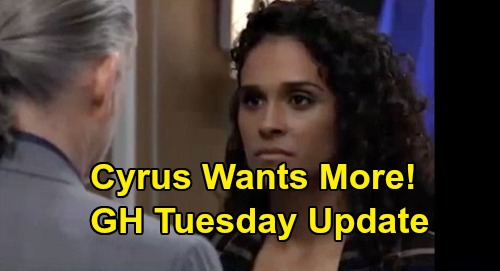 General Hospital (GH) spoilers update for Tuesday, May 12, teases that Nelle Benson Archer (Chloe Lanier) will start to grow desperate. Since Michael Corinthos (Chad Duell) is set to marry Willow Tait (Katelyn MacMullen), Nelle may learn about their last-minute wedding. That might be why Nelle pushes Martin Gray (Michael E. Knight) to help her with a countermove.

Nelle will be looking for a way to balance things out in court, so she might decide to bring new a husband with her to court. We can’t forget that Nelle just scored some ammo against Julian Jerome (William deVry). Nelle could easily blackmail Julian into marrying her if Martin thinks it could boost Nelle’s custody case.

Regardless, Michael and Willow are indeed going to tie the knot. General Hospital spoilers say Sonny Corinthos (Maurice Benard) will summon Lucy Coe (Lynn Herring) for an important task. They’ll need someone to officiate over at the Quartermaine mansion, so Lucy will be called to pitch in.

Before Lucy rushes over, she’ll spend some time comforting Sasha Gilmore (Sofia Mattsson). Lucy is well aware of what it’s like to be known as the town tramp, so she’ll understand Sasha’s perspective.

Of course, Lucy doesn’t have the whole story. Sasha only pretended to cheat with Harrison Chase (Josh Swickard), so she’s not truly a tramp – and that makes all of this even worse!

Once Lucy takes Sonny’s call, she’ll inform Sasha of where she’s headed. It’ll be difficult for Sasha to hear that Michael and Willow’s nuptials are happening. This was the point of Sasha and Chase’s scheme, but that can’t ease their pain right now.

It’s not what they want, but it’s what they believe Michael, Willow and Wiley Quartermaine-Corinthos (Erik and Theo Olson) need.

Carly Corinthos (Laura Wright) will be impressed by Willow’s sacrifice in Tuesday’s episode. Michael’s mom will be proud to welcome Willow to the family, even under such strange circumstances.

Sonny, Josslyn Jacks (Eden McCoy) and Brook Lynn Quartermaine (Amanda Setton) will also be there for the wedding, so Michael will appreciate all the support.

At GH, Cyrus Renault (Jeff Kober) will let Jordan Ashford (Briana Nicole Henry) know he’s not done with her yet. Their paths will cross again soon according to Cyrus, so Jordan should be on edge.

Cyrus is now one of the most dangerous men in Port Charles, but Sonny and Jason Morgan (Steve Burton) have to wait until the time is right to take him down.

Meanwhile, Trina Robinson (Sydney Mikayla) will blast Curtis Ashford (Donnell Turner) for being just as bad as “he” is – presumably meaning Cyrus. Curtis warned this baddie to stay away from Trina and Portia Robinson (Brook Kerr), but Trina won’t want Curtis around either. She still hates Curtis’ guts, but that won’t stop Curtis from fighting for Trina and Portia’s safety.