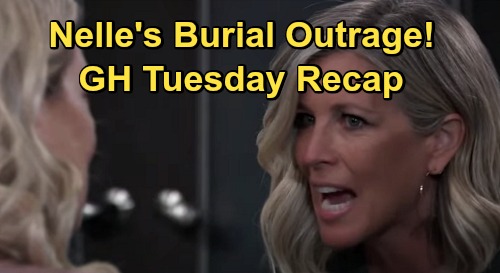 At the Quartermaine mansion, Dante Falconeri (Dominick Zamprogna) managed a nightmare about killing Lulu Spencer (Emme Rylan) by popping a pill from a prescription bottle.

Meanwhile, in the living room, Michael Corinthos (Chad Duell) and Willow Corinthos (Katelyn MacMullen) discussed their marriage, with each tiptoeing around their real feelings for each other. Michael thought it might be easier to end the marriage sooner rather than later.

Soon, Michael emerged from the living room to find Dante in the foyer. Michael and Dante embraced happily, and Dante met Willow.

Dante said that he could see that Willow made Michael happy, but Michael and Willow revealed that they had decided to annul their marriage, and they explained to Dante exactly why they had gotten married.

Over at the bar, Valentin Cassadine (James Patrick Stuart) and Brook Lynn Quartermaine (Briana Lane) talked and flirted, bonding over being perceived as outcasts and for disliking Lulu. Valentin said that if he was in her shoes, he wouldn’t go back to the Q mansion either. Eventually, Valentin and Brook Lynn got closer, and they ended up kissing.

At the PCPD, Curtis Ashford (Donnell Turner) told Jordan Ashford that the detective from Pennsylvania who questioned Carly Corinthos (Laura Wright) was a showboat who wanted to take down a Corinthos.

Meanwhile, outside the interrogation room, Nina Reeves (Cynthia Watros) watched Carly and Jasper “Jax” Jacks (Ingo Rademacher) talking inside. Jax and Carly emerged from the room, and Jax went off with Jordan to sign some paperwork while Nina asked Curtis to find Phyllis Caufield for her. Curtis didn’t immediately say yes.

Jordan and Curtis regrouped in the interrogation room, and Curtis told Jordan about Nina’s request. Then Chase came in and pulled Jordan out into the squad room to talk about the investigation into Jason’s accident. Jordan instructed Chase to stand down and focus on other cases.

Jordan went back to Curtis and they lamented about Chase getting close to finding out Cyrus Renault’s (Jeff Kober) involvement in the accident investigation being shut down.

Curtis asked about the old file that Cyrus wanted, and Jordan said that it was a murder file from over 30 years ago that was heavily redacted. Curtis suspected that it had to do with the hospital somehow.

In the squad room, Chase called someone about getting intel on Jason’s accident, then he received a call saying that he left his wallet at the gym. Chase took off.

Meanwhile, Carly arrived at the Metro Court, still haunted by Nelle’s fall off the cliff. Nina and Jax arrived at the restaurant also, and Jax and Sam stepped aside to discuss Aurora business, while Nina told Carly that she decided to give Nelle a proper burial.

Carly got upset, and she accused Nina of needing therapy. Carly exploded when she heard that Nelle would be buried in the same cemetery as Morgan Corinthos (Bryan Craig) and Mike Corbin (Max Gail). Carly walked off in a huff.

Over at the bar, Diane told Sonny that she had successfully defended Carly with the detective, but that Carly had volunteered that she was “relieved” that Nelle was dead. Diane said that if Carly keeps her mouth shut, she’s home free.

Later, Jax and Nina regrouped, and Nina said that her talk with Carly didn’t go well. Jax thought that while Nina really cared about Nelle, her care was misplaced. Nina was irked.

Meanwhile, at the bar, Carly told Sonny that Nelle would be buried at the same cemetery where Morgan and Mike were buried. Sonny was equally outraged. Elsewhere, Sam called Michael, saying that she could use his help with something.

Back at the gym, Brando was mid-workout when Cyrus materialized, wanting an answer about whether Brando would work for him. Brando sufficiently resisted to make Cyrus think he was honestly conflicted, and Cyrus pressed Brando to be his driver and bodyguard.

Ultimately, Brando agreed, and Cyrus said that he’d notify Sonny about this. Cyrus and Brando shook on it, just as Chase walked in and saw the exchange.

That was a great episode of General Hospital, and there’s plenty more coming tomorrow, so stick with the ABC soap! We’ll give you updates as GH news comes in. And remember to check back with CDL frequently for the latest General Hospital spoilers, daily episode recaps, and news.