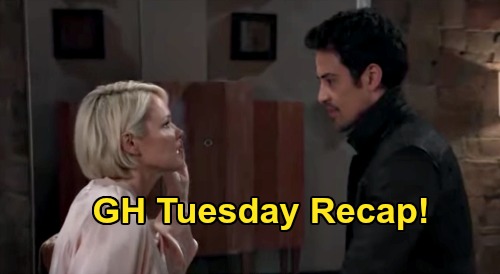 As Ava talked with Julian Jerome (William deVry) on the phone, someone lurked outside the cabin, spying on Ava. Ava could sense someone outside, then she decided that she was being paranoid and went to bed.

A short while later, someone entered the cabin, and Ava hit the person over the head. Turns out, the person was Nikolas Cassadine (Marcus Coloma), who was there to catch Ava in bed with Franco Baldwin (Roger Howarth).

Ava scoffed, saying that she wasn’t there with Franco, and after considerable back and forth about whether the other would cheat first, things got amorous and Ava and Nikolas kissed, then made love.

At the WSB facility in Geneva, Dante Falconeri (Dominick Zamprogna) got a visit from Dr. Kirk (Christopher Cousins), who said that he had news about Dante’s family.

Dante said if this was about the op involving his family, he wasn’t interested, but Dr. Kirk explained that Mike Corbin (Max Gail) was in the final hours of his life.

Dante got upset and wanted some time to himself, so Dr. Kirk left. Dante wished that he had been there in Port Charles, and he imagined a time with Mike in the future that should have come to pass – a time when he and Mike enjoyed a nice talk about being present with one’s family rather than hiding from them.

When Dr. Kirk returned, Dante told him that he wanted to know more about the op in Port Charles.

In Monte Carlo, Robert Scorpio (Tristan Rogers) and Olivia Quartermaine (Lisa LoCicero) walked into a VIP room at the casino. Robert told Olivia to keep a low profile, but Olivia proceeded to draw attention to herself at the bar.

In fact, Olivia got the attention of Winston Roach, one of the casino owners. Robert came over as Olivia and Winston were talking, and Winston thought that he recognized Robert, whom Olivia called “Liam.”

Olivia then made up a story about she and “Liam” being on their honeymoon, but Winston didn’t entirely seem to buy it. After Winston left, Robert told Olivia that Winston had testified against Olivia Jerome (Tonja Walker) and Julian in the past and got a lighter sentence.

Olivia questioned whether there was a connection between Winston and Cassandra Pierce (Jessica Tuck). Robert didn’t know, but he didn’t want to put Olivia in any more danger.

At the hospital, Brook Lynn Quartermaine (Briana Lane) was in her room listening to Olivia’s message to Ned Quartermaine (Wally Kurth) on Ned’s phone. Portia Robinson (Brooke Kerr) and Ned entered the room, and Brook Lynn hid the phone and ordered Ned to leave.

In the hallway, Ned accosted Harrison Chase (Josh Swickard) with questions about the search for Nelle Benson Jerome (Chloe Lanier). Ned lashed out and blustered about how Brook Lynn was hurt because of Nelle. Ned then realized he didn’t have his phone with him.

Later, Ned quizzed Portia near the nurses’ station about Brook Lynn’s condition, but Portia couldn’t discuss it with him.

Back in Brook Lynn’s room, she erased the message from Olivia on Ned’s phone. Chase then came in and asked Brook Lynn about her voice prognosis, but Brook Lynn didn’t really answer.

Brook Lynn said she was leaving the hospital. Portia returned and Brook Lynn asked her to give Ned his phone back. Chase asked Brook Lynn where she was going to stay, since she wasn’t going back to the Quartermaine mansion.

Out near the nurses’ station, Portia gave Ned his phone, and she again refused to answer Ned’s questions about Brook Lynn’s vocal chords. Ned checked his phone and was dismayed to find no message from Olivia.

Ned left a message for Olivia telling her he loved her. Meanwhile, Chase and Brook Lynn left the hospital to get some food together.

Michael took off for a walk, and Felix checked Mike’s vitals. Felix checked with the doctor, and the doctor decided to give Mike morphine as needed to help with discomfort as his body shut down.

Felix took off, after saying that he was praying for them all. Sonny told Carly as they sat near Mike that he was having a lot of old childhood memories that he hadn’t thought about for a long time. Sonny said that he wished he had more time and more memories.

Sonny then imagined a future with Mike in which he, Dante, and Mike had gone to a Yankee’s game together.

Carly fell asleep across the room, and she dreamed about Mike encouraging her about her sadness and telling her that he’ll always be with her…in her heart. Carly woke up and told Sonny that she had the most beautiful dream and that she knew everything would be ok now.

Mike opened his eyes, and Felix came in to do another examination. Sonny, Carly, and Michael regrouped in the hallway, and Sonny said that it seemed like Mike was waiting on something from him. “What can I give him?” Sonny asked.

That was a great episode of General Hospital. You won’t want to miss the action tomorrow, so stay tuned! Be sure to keep CDL at the ready for all of your soap updates and news – we’ve got you covered with the latest General Hospital spoilers and daily episode recaps!