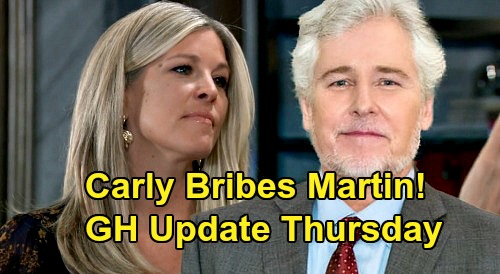 General Hospital (GH) spoilers update for Thursday, May 14, teases that Harrison Chase (Josh Swickard) will be surprised by Carly Corinthos (Laura Wright) latest appearance at the PCPD. When Chase asks why Carly’s there, she’ll admit she wanted to thank him. Since Carly knows about the fake affair, she’ll acknowledge the sacrifice Chase made and thank him for his part in making this new marriage happen.

Michael Corinthos (Chad Duell) and Willow Tait (Katelyn MacMullen) will be busy with Diane Miller (Carolyn Hennesy) across town. Diane will be pleased that Michael now has a substitute mom to put up against Nelle Benson Archer (Chloe Lanier) in court, but she’ll be sorry she doesn’t have a little present for the newlyweds.

Of course, protecting Wiley Quartermaine-Corinthos (Erik and Theo Olson) is the only present Willow and Michael truly need. That’s what matters to “Millow,” so they’ll be glad Diane’s feeling confident heading into this battle. Carly, on the other hand, will want an insurance policy. GH fans can expect Carly to pay Martin Gray (Michael E. Knight) a visit in hopes of winning him over.

General Hospital spoilers say Carly will do her best to bribe Martin. She’ll push Martin to throw the case and get a hefty Corinthos reward. However, “Marty” will be loyal to Nelle. Martin may even be able to use Carly’s bribery against her when the time comes!

Over with Sasha Gilmore (Sofia Mattsson), she’ll be looking terrible on an elevator with Nina Reeves (Cynthia Watros). Nina will think it seems like Sasha’s having a tough morning, but Sasha must’ve had a tough night, too.

After crying and drinking for hours, Sasha won’t exactly be picture-perfect for this Face of Deception photoshoot. To make matters worse, Nina will get a bit snippy with Sasha. There’ll be some tension, which is about the last thing Sasha needs right now.

Meanwhile, Maxie Jones (Kirsten Storms) will freak over how late it’s getting. She’ll think it’s highly unprofessional of Sasha to be a no-show, but Lulu Spencer (Emme Rylan) will give Maxie a pep talk. With Lulu backing her up, Maxie will try to rein Sasha in.

General Hospital spoilers say Maxie will want Sasha to get her butt over there ASAP! She’ll call Sasha to let her know there’ll be consequences if she doesn’t arrive in the next five minutes.

Later, Maxie will continue to rant at Sasha, who’ll be hungover and out of it. A production assistant will suggest some narcotics to get Sasha through the photoshoot, and it appears Sasha will take her up on the offer.

Back with Martin, he’ll speak with Valentin Cassadine (James Patrick Stuart) about how that ELQ takeover mission is coming along. Valentin will be ready to blindside the Quartermaines with his business shocker – and it’ll be happening sooner than any of them expect.

In the meantime, Martin will head to court and find that his client’s missing. Nelle’s absence will make a few waves – but not as many as her arrival! General Hospital spoilers say Nelle’s entrance will bring a dramatic scene and stir up some pre-custody battle mayhem.

Since Nelle and Julian Jerome (William deVry) likely got married offscreen, that’ll be another bomb for Nelle to drop when Monday rolls around. Until then, Hamilton Finn (Michael Easton) and Anna Devane (Finola Hughes) will settle on a wedding date.

They’ll finally decide when they’re getting married, but Robert Scorpio (Tristan Rogers) will manage to kill the mood. Robert will hurl some accusations at Anna as he tries to figure out if Holly Sutton’s (Emma Samms) downed ship was truly murder. Once Robert settles down, he’ll confess that there’s no real evidence.

When Robert gets updates on what Anna’s learned, he’ll settle on a surprising conclusion. Robert will think it’s likely that Holly’s still alive, so he may want Anna’s help to prove it.

Finally, Laura Collins (Genie Francis) and Jasper “Jax” Jacks (Ingo Rademacher) will mull over what Valentin’s coming to do without the Cassadine fortune. Laura certainly won’t be worried about Valentin being strapped for cash. Valentin’s a resourceful guy, so Laura will assume he’s finding another way to get rich quick.