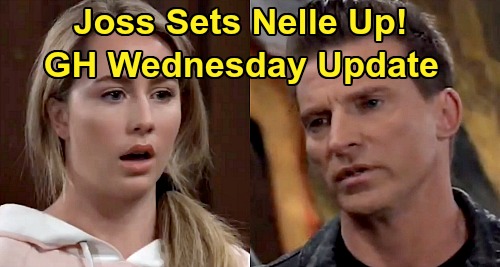 General Hospital (GH) spoilers update for Wednesday, April 8, teases that the ABC soap will do something a little different. Instead of a usual episode that takes place solely in the present, GH will also step back in time and show us what happened before Carly Corinthos (Laura Wright) came to Port Charles in 1996.

Of course, there’ll still be some crucial moments in the present, so let’s go over those first. In the Corinthos kitchen, Willow Tait (Katelyn MacMullen) will want a plan to take Nelle Benson Archer (Chloe Lanier) down.

General Hospital spoilers say protecting Wiley from Nelle will remain Willow’s priority. Over with Josslyn Jacks (Eden McCoy), she’ll also have Nelle on her mind. Josslyn will be sick and tired of dealing with Nelle, who she’ll call evil. After Joss rants to Jason Morgan (Steve Burton), she’ll urge him to promise he’ll stop Nelle.

Jason will be curious what Josslyn’s expecting here, so she’ll explain what she wants Jason to do. However, Jason isn’t going to kill Nelle if that’s what Josslyn’s hoping for – at least not because Joss says so! Jason would do it if Sonny Corinthos (Maurice Benard) ordered the hit, but they haven’t reached that point of desperation yet.

Speaking of desperation, Nina Reeves (Cynthia Watros) will frantically try to settle things down at Crimson. General Hospital spoilers say Nina will try to talk some sense into Nelle, but she’ll get nowhere. Carly will be pushing all the right buttons, so Nina will fret to Jasper “Jax” Jacks (Ingo Rademacher) about Carly coming dangerously close to harassment.

It’s true that Carly confronts Nelle every chance she gets – and the new GH episode, Wednesday, April 8, will bring yet another opportunity for Carly to let Nelle have it. Naturally, Nelle will give as good as she gets.

General Hospital spoilers say Nelle will think it’s time to get honest. She’ll think Carly can start by admitting she’s just like Nelle. Carly would never in a million years admit that, but there really are some similarities.

Nelle and Carly’s fight will undoubtedly take them back to all the kidney drama. Frank Benson was Carly’s adoptive father as well as Nelle’s biological father – at least as it stands right now. Nelle targeted Carly for stiffing Frank on the money for her kidney, but Carly never knew anything about that.

It was Jax who bought a kidney for Josslyn, and Frank lied to cover up the fact that he gambled all the money away. GH fans can expect Frank to come up during this heated faceoff.

Carly will argue that she never got a dime or anything else from Frank. She’ll feel like Nelle was the only kid Frank really cared about, but Nelle actually had a pretty hard life – as evidenced by her stolen kidney and all the lies.

Willa Rose will make her GH debut as Young Nelle while Eden McCoy plays Young Carly in these upcoming scenes.

Although many General Hospital fans have been complaining about the show rewriting history, it’s important to know what to expect. Young Carly will indeed see Young Nelle with her dad and be a bit heartbroken about it.

This younger version of Carly will battle resentment and pain since Frank never cared about her. Young Carly will feel like Frank’s changed his ways and is doting on Young Nelle.

General Hospital spoilers say a stunning secret will come to light thanks to these flashbacks. Will they show us the origin of the other necklace half? Nina will confess to Jax that she feels like her daughter’s still out there, so GH could easily cut to Young Nelle with that necklace.

Whether resentful Young Carly swiped that necklace or simply got a good look at it, Carly clearly knows more than she’s letting on. General Hospital spoilers hint that this is all building to a bio daughter reveal – and it looks like Nelle’s the perfect fit.

This special Carly show should bring some big surprises, so we’ll pass along updates as other news comes in. GH fans won’t want to miss the secret that’s about to be unleashed! You can always visit CDL for other terrific General Hospital spoilers, news and updates.