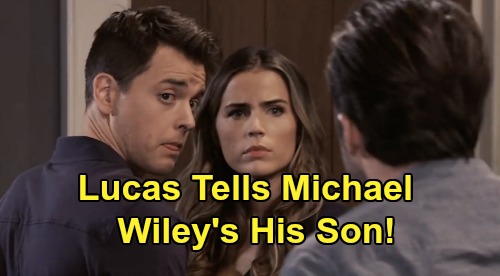 General Hospital (GH) spoilers update for Wednesday, February 19, teases that Sonny Corinthos (Maurice Benard) will show up to see Cyrus Renault (Jeff Kober) at Pentonville. As GH fans might expect, this meeting will be another tense one. Cyrus will insist that Sonny’s about to make a very big mistake. He’ll give Sonny one last opportunity to shift his strategy while he still can.

However, Sonny won’t back down or even cave an inch. He’ll think Cyrus is the one who’s already made a big mistake – and that was targeting Sonny’s loved ones. Now Sonny feels he has to send a clear message, which is why Jason Morgan (Steve Burton) is off hijacking a shipment and doing just that.

Jason will aim his weapon and demand that anyone in hiding put his hands up. He’ll want to show everybody who’s boss and pull off this mission ASAP.

Meanwhile, Jordan Ashford (Briana Nicole Henry) will be on the hot seat. Curtis Ashford (Donnell Turner) will grill Jordan about this whole situation with Marcus Taggert (Real Andrews), which is clearly quite dangerous.

The Cyrus case has already led to Bob Massicotte’s (Randy J. Goodwin) death and now Mark Simon’s demise as well. Taggert and Jordan could be next if they’re not careful!

As for Curtis, he may find it difficult to pry info out of a worried Jordan. Since things could be so deadly, Jordan may not think it’s wise for Curtis to be involved.

Over with Mac Scorpio (John J. York), he’ll spot Taggert and take a minute to catch up. Mac will note that Taggert’s back in town right as Sonny’s mob battle’s erupting. He’ll likely think that’s suspicious – or at least a lucky break.

While Taggert deals with Mac’s questions, Cameron Webber (William Lipton) will face a few questions, too. Trina Robinson (Sydney Mikayla) will interrogate Cam until he finally admits he likes Josslyn Jacks (Eden McCoy) a lot – and that’s a confession Trina can work with. She’ll hope that their upcoming “date” will bring out Josslyn’s jealous side and pull her in Cameron’s direction.

Of course, Brad will have to break down and confess to the baby swap eventually. He’ll face Michael’s fury along with the fury of almost everyone at that party.

Julian should go easy on Brad, who’ll keep quiet about the fact that Julian knew the truth. Harrison Chase (Josh Swickard) will be called over to the Corinthos home on Wednesday, so Brad’s arrest should be coming within the next couple episodes.

As for Nelle, she’ll bolt to Willow Tait’s (Katelyn MacMullen) place and most likely demand to see, and even take, “Wiley.” Willow will apparently put up a fight, so a fierce faceoff will go down – and we do mean fierce!

This physical confrontation could play a role in Nelle’s looming arrest, but she could also get locked up over baby switch accusations.