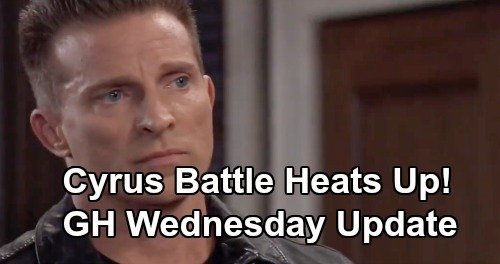 General Hospital (GH) spoilers update for Wednesday, February 5, tease that Carly Corinthos (Laura Wright) will expect details on Sonny Corinthos’ (Maurice Benard) plans. “I’ll take care of it, Carly” just isn’t going to work for her. The lives of Carly’s children were put at risk, so she’ll want Sonny to tell her who was behind this. Carly will also want to know exactly what Sonny intends to do about it.

Jason Morgan (Steve Burton) managed to pry some answers out of the gunman he took down. As the baddie prepared to die, he revealed a name that’ll become quite important: Cyrus Renault (Jeff Kober).

Jason and Sonny will do some research on this enemy, who was transferred to Pentonville not too long ago. No matter how much they share with Carly, there’ll definitely be some bold moves in store.

Sonny will set up a meeting with Cyrus, which will go down later this week. Until then, let’s talk about Sam McCall (Kelly Monaco). She still needs hard evidence against Peter August (Wes Ramsey), so she’ll mull over the situation with Damian Spinelli (Bradford Anderson). Sam will insist that Peter hired the gunman, but proving it won’t be an easy task.

The good news is Hamilton Finn (Michael Easton) will eventually provide proof that could help. The bad news is it could blow up his relationship with Anna Devane (Finola Hughes).

Finn will commit that betrayal in an upcoming episode, but he’ll be disappointed in Anna for now. She left Violet Barnes (Jophielle Love) alone with Peter, and that’s unacceptable as far as Finn’s concerned.

Anna may argue that they were all having a good time together. GH likes to play up the fact that Peter’s great with kids, so Anna may point that out. She certainly won’t think Peter would ever do anything to hurt Violet – and he probably wouldn’t.

Even so, Finn won’t think he can be too careful when his daughter’s so precious to him. He doesn’t trust Peter at all, so he may warn Anna that this can’t happen again.

Other General Hospital spoilers say Nina Reeves (Cynthia Watros) will consider her feelings. When perpetually nosy Maxie Jones (Kirsten Storms) asks if Nina’s interested in Jasper “Jax” Jacks (Ingo Rademacher), Nina will have to decide if that’s true. There’s definitely a little spark between them – something that could grow into a bigger flame if they let it.

Next, Alexis Davis (Nancy Lee Grahn) will get the wrong idea about how far this romance has progressed. Jax might allude to crossing the line, which could be why Alexis will assume they slept together.

However, Jax will clarify that it was just a kiss. Since Neil Byrne (Joe Flanigan) is in so much trouble for dating a patient, Alexis may advise against mixing business with pleasure.

Regardless, Alexis will offer some words of wisdom that make Jax rethink his future. Despite Nina’s willingness to move forward, Jax will pump the brakes and suggest friendship is ideal right now. That should leave Nina confused about the mixed signals – and perhaps a bit disappointed.

Nelle won’t think the Quartermaines are offering her near enough money to hit the road.

Nevertheless, Julian will shut down the idea that there’s a catch. He’ll claim he wants to extend an olive branch instead, but it’s best for Brad to proceed with caution! We’ll give you updates as other GH details emerge. Stay tuned to the ABC soap and don’t forget to check CDL often for the latest General Hospital spoilers, updates and news.