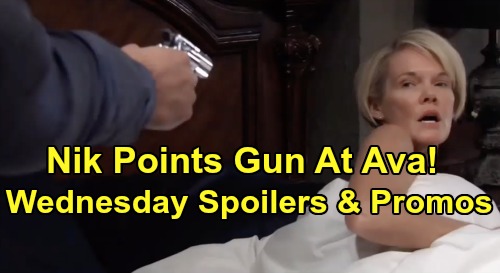 General Hospital (GH) spoilers for Wednesday, January 8, tease that Sonny Corinthos (Maurice Benard) will catch Gladys Corbin (Bonnie Burroughs) off guard. She’s been getting too nosy for Sonny’s taste, so that may be why he has a little surprise for her.

Sonny will lead Gladys out of the kitchen and leave her looking a bit uneasy. He may offer some reminder that proves it’s a terrible idea to cross him.

Over with Nina Reeves (Cynthia Watros), she’ll battle more regrets over her role in the chaos. Nina admitted that Jasper “Jax” Jacks (Ingo Rademacher) was right. Revenge has been far from sweet, and now Charlotte Cassadine’s (Scarlett Fernandez) the one who’s really going to pay the price.

Laura Webber (Genie Francis) will be on hand along with Nina to hear Lulu’s declaration. They may think Lulu needs to cool off and let the dust settle before she makes any major decisions.

As for Valentin, he was just arrested and will find himself sitting in the PCPD interrogation room on Wednesday. Despite his bleak situation, Valentin will be brimming with confidence as usual.

After Robert Scorpio (Tristan Rogers) enters, Valentin will tell him what he expects. He’ll think Robert’s going to follow the law and let him go, but Robert may think Valentin has it all twisted. Valentin is a criminal who’s gotten away with far too much for far too long. Robert might suggest that justice is finally being served!

Other General Hospital spoilers say Carly Corinthos (Laura Wright) will drop a bomb on Alexis Davis (Nancy Lee Grahn) and Sam McCall (Kelly Monaco). They’ll be stunned to learn Nikolas Cassadine (Marcus Coloma) is alive and well. Carly will explain that Nik resurfaced last night and try to answer their questions as best as she can.

Sam’s reaction to this Nikolas news may not go over well with her mom. Then again, this could be about Sam’s current dilemma. She can’t be anywhere near Jason Morgan (Steve Burton) or else she’ll be sent back to prison, so Alexis will definitely want Sam to be careful.

Regardless, Sam will do something that Alexis disapproves of on Wednesday, but a little mother-daughter conflict should provide some good drama! Speaking of drama, Ava Jerome (Maura West) will awaken and find a possession of hers missing. She’ll turn over in bed to find Nik pointing a gun at her and asking if she’s looking for this.

There was a definite spark when Ava and Nikolas kissed at their wedding, but things will remain complicated between them. General Hospital spoilers say they’ll both face major problems thanks to this decision, but that’s what happens when two dark souls come together. They’re complex people with the same sense of determination, which should draw them closer eventually.

Finally, GH fans can expect Jason Morgan (Steve Burton) to seek a deal. He’ll corner Robert and hope they can reach an agreement of some sort. Jason’s endgame will undoubtedly be making Sam’s legal issues go away and reuniting their family. However, first thing’s first!

Taking Peter August (Wes Ramsey) down is certainly something Robert’s interested in – and it could be a mutually beneficial mission if he teams up with Jason. We’ll give you updates as other GH details emerge. Stay tuned to the ABC soap and don’t forget to check CDL often for the latest General Hospital spoilers, updates and news.