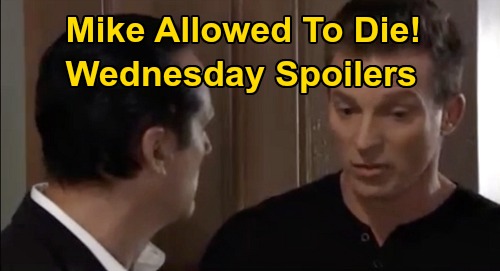 On Wednesday, Liz will suggest her feelings for Nikolas are complicated – just like Franco’s feelings are for Ava Cassadine (Maura West). Unfortunately, Liz’s response may leave Franco even more unsettled, which is exactly what Nikolas has in mind. As for Ava, she’ll sip a martini and wonder what Nikolas is going to do. Will Nikolas choose his son or his fortune?

Spencer Cassadine (Nicholas Bechtel) is still waiting to hear back about whether Nikolas is willing to divorce Ava, but it doesn’t look like Nik’s going to budge. Nikolas may believe he’s on the verge of getting Ava to cheat with Franco, which would get him out of this marriage with his fortune intact.

However, General Hospital spoilers point to Liz and Franco possibly catching on soon. They man realize they’re being manipulated and plot to do some manipulating of their own!

Over with Laura Collins (Genie Francis), she’ll reveal something to Lulu Spencer (Emme Rylan) that gets a surprised reaction. A stunned Lulu will ask if Laura’s really sure she’s prepared to do that.

This might have something to do with Laura helping Robert Scorpio (Tristan Rogers), who believes Holly Sutton (Emma Samms) may still be alive. Laura will fear Robert’s in denial, so Lulu may worry about her mom feeding Robert’s delusions.

Whatever the case, Laura will decide to assist with Robert’s search for answers despite her doubts. It’s a good thing Robert will get some help since Holly’s almost certainly alive!

In the meantime, Julian Jerome (William deVry) will tell Nelle Jerome (Chloe Lanier) exactly what she wants to hear. Before court resumes, Julian will let Nelle know that losing isn’t an option.

Nelle will smile and seem pleased that Julian’s still playing by her rules. She’ll also be hopeful since Nina agreed that Nelle could count on her to testify.

Of course, we should point out that Nina insisted she would do this for Wiley Quartermaine-Corinthos (Erik and Theo Olson) and looked uneasy as she hugged Nelle. Those could be hints that Nina actually plans to betray Nelle on the stand.

Regardless, Nelle was recently holding the missing half-heart pendant half in court. If Nina catches a glimpse of that, it could easily swing her support back to Nelle. In other words, there are a lot of unknowns and tricky factors at this point. GH is setting the stage for some true shockers in that courtroom, so this custody battle’s about to get messy.

As for Carly Corinthos (Laura Wright), her credibility will take a major hit once she testifies. Martin Gray (Michael E. Knight) will go after Carly hard, so she’ll struggle to explain her past actions.

Michael Corinthos (Chad Duell) will also find himself in the position of defending himself. Martin will put Michael on the hot seat in more ways than one – especially when it comes to Michael’s new marriage.

General Hospital spoilers say Martin will ask if Michael loves his wife. Naturally, Michael may bend the truth a bit here. Michael doesn’t love Willow Tait (Katelyn MacMullen) like a man should love his wife, but he does love her as a friend. It wouldn’t be lying for Michael to insist he loves Willow.

If Martin pushes Michael on the topic of being IN love with Willow, that could present more challenges. Whatever the case, Michael will do his best to tackle Martin’s questions and stay calm in front of the judge.

At Turning Woods, Sonny Corinthos (Maurice Benard) will process what Jason Morgan (Steve Burton) admitted. Liz thinks Mike Corbin (Max Gail) wants to let go, but she suggested he’s likely just waiting on Sonny to tell him it’s OK. Jason filled Sonny in on Liz’s opinion, but Sonny may wonder how he can be certain that’s what’s going on.

There’s a good chance Sonny will indeed give Mike that, which should set up Mike passing away before new episodes run out on Thursday. We’ll keep you posted as other GH news and updates emerge. General Hospital fans will want to stay tuned for the gripping goodbye scenes ahead. Don’t forget to stop by CDL regularly for exciting General Hospital spoilers, updates and news.