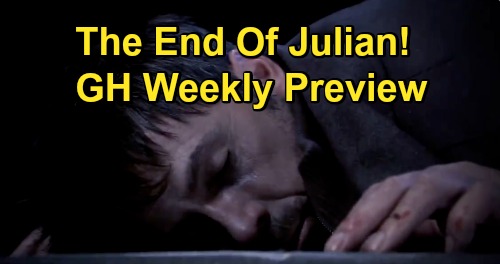 General Hospital (GH) spoilers tease that viewers are in for an exciting week from December 14 to December 18 on the ABC soap. The new GH weekly preview is out, and it shows a lot of action in store for the week, so you won’t want to miss a beat of the action.

First off, things will be pretty tense with Sonny Corinthos (Maurice Benard) and Julian Jerome (William deVry) as they stand face-to-face. GH viewers will remember that Sonny tracked down Julian in an alley behind Kim Nero’s (Tamara Braun) NYC apartment.

Well, Julian is shown yelling, “Come on! Let’s go!” at Sonny, then in a quick scene, Julian is shown falling to the ground unconscious or even dead. This could very well be the end for Julian, or will he survive and live to tell the tale?

GH viewers will have to tune in to see how Julian’s last week on the show shapes up.

Meanwhile, in Geneva, Scott Baldwin (Kin Shriner) will be horrified by the turn of events that have gone down in the WSB compound.

The preview shows Scott blustering, “I can’t believe this is happening!”

General Hospital spoilers say that Obrecht will have some sort of plan to get rid of Dr. Kirk’s body, or at least a plan to escape the facility and head back to Port Charles. Scott’s going to have to get out of this somehow, so we’ll see how that shapes up.

Interestingly, Franco Baldwin (Roger Howarth) is shown suddenly sitting up in a hospital bed, indicating that he could get some sort of treatment while in Geneva.

Other parts of the GH preview move pretty fast – Britt Westbourne (Kelly Thiebaud) is shown entering a hospital room in a huge rush. This could be Brad Cooper’s (Parry Shen) room, since GH viewers know that he’s in potential danger from Cyrus Renault’s (Jeff Kober) henchmen.

Brad should be getting some protection soon from Sonny, so hopefully he’s ok.

Next, the preview shows Michael Corinthos (Chad Duell) kneeing Harrison Chase (Josh Swickard) violently at the gym. It looks like Michael’s going to be peeved about the whole fake affair deception that Chase and Sasha Gilmore (Sofia Mattsson) perpetrated, and he’ll take out his frustrations on Chase.

The promo also hints at the action involving Tracy Quartermaine (Jane Elliot) and her scheme to get Alexis Davis (Nancy Lee Grahn) in trouble with her drinking.

As GH viewers know, Tracy seems to be in the middle of a plot to make it look like Alexis was driving drunk, which is probably going to get Alexis in some major trouble – which is exactly what Tracy wants, so that Alexis is distracted and doesn’t sing about her affair with Ned Quartermaine (Wally Kurth).

Finally, the preview shows Jordan Ashford (Briana Nicole Henry) with Marcus Taggert (Réal Andrews) out in the park. Jordan notices someone following them, and it looks like the person could be Trina Robinson (Sydney Mikayla), as she’s shown next looking around worried.

Trina might have been following Jordan to find Taggert, and some danger could ensue.

Jordan is shown telling Taggert to get down and then drawing her weapon. Might Jordan and Taggert come face to face with Trina? Or will Taggert manage to flee before Trina see him? It’s going to be a scary turn of events either way, considering that the promo ends with the sound of a gun firing!

It looks like we’re in for an exciting week, so stay tuned! We’ll be sure to give you updates as more GH news comes in. Stick with the ABC soap and remember to keep CDL bookmarked for all the latest General Hospital spoilers, daily episode recaps, and news.