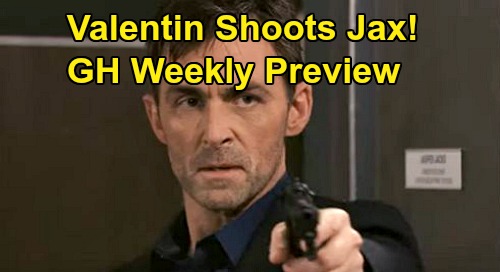 General Hospital (GH) spoilers preview teases that the action will really be heating up this week. The new GH preview for the week of February 10-14 is packed with action and promises a week of secrets, rivalries, and one character going for blood. First off, the situation surrounding Peter August (Wes Ramsey) will take center stage this week, as Anna Devane (Finola Hughes) struggles to protect her son from others who are determined to expose his awful truths.

Hamilton Finn (Michael Easton) is a big part of this drama, since he’s the only person besides Anna who knows that Anna obfuscated the evidence connecting Peter to the gunman who tried to kill Andre Maddox (Anthony Washington) and Franco Baldwin (Roger Howarth) in the OR. Of course, deep down, Anna suspects that Peter may have been involved with the OR shooting, but she doesn’t want to admit it to herself.

But it looks like both JaSam and Robert Scorpio (Tristan Rogers) will push the issue this week. Jason Morgan (Steve Burton) and Sam McCall (Kelly Monaco) are shown in the GH promo talking privately with Finn, with Jason saying, “It was Anna, she was covering for Peter,” so it doesn’t look like Finn’s going to be able to hide what Anna did and will betray her. The question now is when will he hand over the evidence that Anna hid?

On the Robert front, he’ll have a heated exchange with Anna this week over Peter. As Peter approaches the door of Anna’s house, Robert and Anna will be inside arguing. Anna will tensely ask Robert why he can’t just leave this alone, and Robert will reply angrily, “Because I can’t!” It looks like Peter’s secrets may come to light sooner rather than later.

Next, the new GH promo deals with the ongoing estrangement of Nina Reeves (Cynthia Watros) and Valentin Cassadine (James Patrick Stuart). Valentin has been awfully confident lately about his prospects of getting Nina back. He’s sure that she’s still in love with him, but Nina’s shown in the promo telling Ava Jerome (Maura West) in no uncertain terms that she’s moving on.

Of course, Nina has her sights set on Jasper “Jax” Jacks (Ingo Rademacher), even though Jax recently put-on the breaks and said that they needed to remain just friends. However, GH viewers know that Jax is pretty into Nina, too. Well, it seems that Valentin will get wind of Jax’s interest in Nina, and possibly even of the kiss that the two recently shared, as he’s shown barging into Jax’s office angrily.

In what looks like it will be an explosive scene, Valentin barrels into the office, followed closely by Josslyn Jacks (Eden McCoy) and confronts Jax, who happens to be standing there alongside Dustin Phillips (Mark Lawson). Amazingly, Valentin pulls out a gun and points it squarely at Jax, as Jax asks Valentin what he wants.

At the end of the GH preview promo, Valentin fires the gun, but what’s really going to happen here? Given that Port Charles’ new hero Dustin is on the scene, it’s likely that he could intervene and stop Valentin from shooting Jax. And one wonders exactly what’s got Valentin so riled up that he would shoot Jax in front of Josslyn – could it be more than just Jax and Nina’s recent kiss?

At any rate, Valentin will probably make a load of problems for himself. Aside from the legal troubles he could face for attempted murder, he’ll probably have both Jax’s and Sonny Corinthos’ (Maurice Benard) wrath for endangering Josslyn and potentially shooting her father right in front of her. We’ll see what happens from here, but Valentin looks to be in some serious trouble.