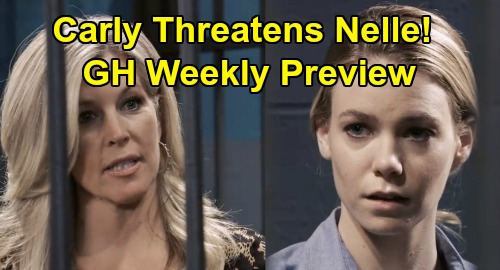 General Hospital (GH) spoilers weekly preview tease that we’re in for an explosive week (February 24 to February 28) on the ABC soap as the new GH promo promises some big confrontations, major drama, and a serious Port Charles disaster. First off, there will be ongoing fallout from the big Wiley Corinthos (Erik and Theo Olson) reveal that occurred last week.

The promo does show a nice scene with Michael Corinthos (Chad Duell) and Wiley playing happily, but while they’re enjoying their time together, you can bet that both Lucas Jones (Ryan Carnes) and Willow Tait (Katelyn MacMullen) will be in utter agony over their respective losses.

And although the confrontation against Brad Cooper (Parry Shen) has already taken place, there will be another big confrontation that needs to go down…and that’s between Carly Corinthos (Laura Wright) and Nelle Benson Archer (Chloe Lanier).

Carly is shown in the new GH weekly preview at the PCPD jail, coming face-to-face with Nelle and letting her have it. She tells Nelle that she’s never going to see Wiley again, and that if the legal system doesn’t make sure of it, then she will.

Of course, Nelle is probably going to continue to play the victim here, insisting that Brad took advantage of her and stole the baby from her shortly after birth – at least that’s the story that she’s sticking with for now.

Of course, that story is probably going to become hard to maintain, especially since Nelle was caught with passports for herself and Wiley to trek to Buenos Aires.

That should be pretty difficult to fit into the narrative that Nelle’s trying to push, but it looks like she’ll continue on with her victim story – which is something that Carly surely won’t buy for a minute.

Next, the promo deals with some other action that will hit Port Charles this week. As GH viewers know, the PC teens will be having their winter formal this week, which is something that Cameron Webber (William Lipton) and Trina Robinson (Sydney Mikayla) are gearing up for.

They’re going to the dance together, with the ultimate goal of making Josslyn Jacks (Eden McCoy) jealous. However, it looks like they will have some bigger issues to deal with as the night progresses.

Cyrus Renault (Jeff Kober) has promised to destroy not only the lives of Jordan Ashford (Briana Nicole Henry) and Marcus Taggert (Real Andrews) but the town of Port Charles as well. And it looks like part of his plan is going to collide directly with the winter formal.

Now, that makes some sense when you consider that Trina is Taggert’s daughter. She could be a target of violence, or perhaps even of some major scare tactic to send Taggert a message.

The preview shows Cameron running frantically and looking behind him in fear, so it definitely looks like something big is going to go down. Let’s hope that he, Trina, and Josslyn make it through unscathed.

There’s a good chance that one of them could be injured, as ongoing GH spoilers say that as a result of this week’s chaos, several people will be admitted to the hospital with injuries.

That certainly doesn’t sound good, and when you factor in that Josslyn could also be a target given her connection to Sonny Corinthos (Maurice Benard), it sounds like something major is going to go down.

Next, the promo shows some flashes of various PC residents, including Brando Corbin (Johnny Wactor), Laura Collins (Genie Francis), Julian Jerome (William deVry), and Jason Morgan (Steve Burton). It makes sense that Laura would be a major part of the action as she’s highly invested in the mob war and the effect of it all on her beloved city.

As for Brando and Julian, we’ll have to stay tuned to see how they factor, if at all, into the upcoming violence. We should also note that there’s a quick scene outside of Sonny’s office/restaurant where a shadowy figure appears to be lurking, which could indicate another possible attack on Sonny.

Cyrus will have some major payback for Sonny, it seems – after all, Sonny and Jason did destroy millions of dollars of Cyrus’ product recently.

Finally, the new GH promo shows Franco Baldwin (Roger Howarth) and Elizabeth Baldwin (Rebecca Herbst) in a confused moment at home, as Elizabeth is looking at her phone and seems puzzled.

Franco asks, “What did you just say?” They both look pretty worried about whatever update Elizabeth has just received, so this could have to do with the danger that Cameron will be facing.

Or, it could have something to do with Ava Jerome (Maura West). GH viewers will remember that Trina recently captured a photo of Ava kissing Franco on the cheek. Ava was thanking him for reluctantly agreeing to do a portrait of her, but the photo ended up on social media, so Elizabeth could be reacting to seeing that photo.

GH viewers will remember that Nikolas Cassadine (Marcus Coloma) and Ava are in the midst of a platonic marriage and neither of them can cheat, or they forfeit their portion of the Cassadine fortune.

Making sure that Elizabeth sees a picture of Ava kissing Franco could be part of a sneaky move on Nikolas’ part to drive a wedge between “Friz” and push Ava toward Franco so that she’s tempted to cheat.

At any rate, it appears that we’re in for a big week on GH, so be sure to stay tuned! Stick with the ABC soap and don’t forget to check back with CDL for the latest General Hospital spoilers, recaps, and news.