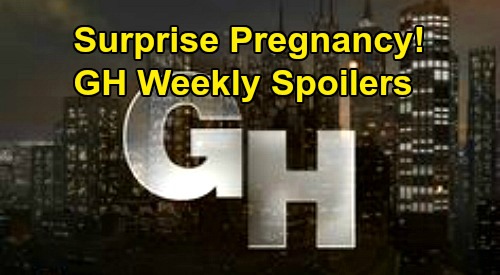 General Hospital (GH) spoilers for the week of May 18-22 tease that some shockers are in store. First, Nelle Benson Archer (Chloe Lanier) will have a special announcement to make. GH fans can expect Nelle to stun the courtroom with her updates, which likely involve her new husband: Julian Jerome (William deVry).

Elsewhere, Jordan Ashford (Briana Nicole Henry) will have a warning to pass along. She’ll tip Sonny Corinthos (Maurice Benard) off to trouble, so he may be tempted to kick his Cyrus Renault (Jeff Kober) takedown plans into high gear.

Of course, Sonny will also be concerned about this custody battle outcome and how Julian fits in all this. General Hospital spoilers say Sonny will battle suspicions, especially since Julian literally just admitted he was rooting against Nelle. Sonny will know there had to be dirt involved, so Julian should be on edge.

As for Carly Corinthos (Laura Wright), she’ll meet with Diane Miller (Carolyn Hennesy) before taking the stand. Carly could certainly use some extra prep time with Diane since she’s got such a hot temper.

Carly’s credibility will take a hit in court, and Michael will be put in a position to defend himself. Martin will fight hard to make sure Nelle walks away with at least partial custody of her son.

Naturally, Willow Tait (Katelyn MacMullen) will fret about Wiley Quartermane-Corinthos’ (Erik and Theo Olson) future during all of this. There’ll be some stressful moments as this custody battle continues.

Nina Reeves (Cynthia Watros) will get some encouragement from Nelle in the week ahead. Nelle will still be hoping Nina takes the stand and testifies on her behalf. It’ll be interesting to see if Nina will end up helping or hurting Nelle’s case.

General Hospital spoilers are leaning toward helping at this point, but we’ll see how it all plays out.

Nelle will cap off this custody battle with an impressive performance. She’ll turn on the waterworks and do everything she can to convince the judge that Wiley belongs with his biological mother.

Speaking of mothers, there’s a good chance Molly Lansing-Davis (Haley Pullos) will learn she’s going to be one. GH fans can expect a pregnancy surprise next week – and all signs point to Molly having a baby on the way.

Meanwhile, Elizabeth Baldwin (Rebecca Herbst) and Franco Baldwin (Roger Howarth) will face more tension. After Liz opens up to Jason Morgan (Steve Burton), Franco will pay his wife a visit at GH. Although Franco may hope to work through his recent issues with Liz, it looks like more problems will arise instead.

Over with Robert Scorpio (Tristan Rogers), he’ll be desperate to prove Holly Sutton (Emma Samms) is alive and out there somewhere. Laura Collins (Genie Francis) will fret about Robert possibly believing what he wants to be true, but Robert will feel like he’s on the right track. He’ll have a strong hunch that Holly can be found, but it could take some work to make it happen!

As for Alexis Davis (Nancy Lee Grahn), she’ll be feeling pretty lost. General Hospital fans will recall that Alexis was recently disbarred, so she’ll have to reevaluate her future and figure out what’s next. Back with Sonny, he’ll face devastation. It sounds like Sonny may make the difficult decision to let Mike Corbin (Max Gail) go soon.

Across town, Sasha Gilmore (Sofia Mattsson) will have a reckless night – most likely filled with drugs and booze. General Hospital spoilers say Sasha will lose control in a big way, so this could end in disaster!

Finally, Valentin Cassadine (James Patrick Stuart) will deliver huge news. Will Valentin have enough ELQ shares for a takeover? Will Valentin let the Quartermaines in the loop?