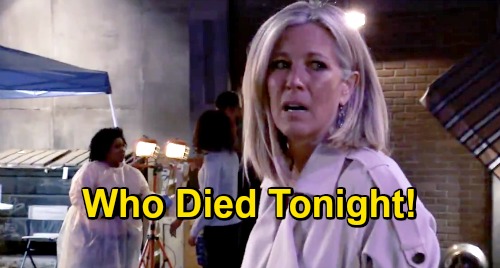 General Hospital (GH) spoilers preview teases that there will be some big drama in the aftermath of the explosion at The Floating Rib. The new GH preview promo is out, and it offers some insight into what’s going to happen in the moments right after the bomb explodes.

First off, Dante Falconeri (Dominick Zamprogna) is shown hurriedly calling an ambulance to the scene. GH viewers will remember that Dante was just arriving at The Floating Rib when the bomb detonated.

“I need an ambulance! You need to send someone here – hurry!” Dante tells the 911 operator as he stands outside of the restaurant. This indicates that Dante may not be able to get into the establishment due to all the debris and the possible danger of going inside.

Something tells us that Dante will find a way in, though, since he knows that Lulu Spencer (Emme Rylan) is inside the place.

Next, the promo moves to a worried-looking Maxie Jones (Kirsten Storms) telling someone, “Nothing in life is certain.” That doesn’t sound good, and Maxie sounds pretty distraught – she might be at the hospital waiting for word on survivors of the blast when this goes down.

Back over at The Rib, Mac Scorpio (John J. York) is shown physically grabbing Laura Collins (Genie Francis) and stopping her from rushing onto the scene – presumably to find Lulu.

GH viewers will remember that Laura was with Lulu at the restaurant earlier in the evening, and she’s going to know Lulu was in the place – it looks like we could see some heartbreaking scenes here as Laura waits and wonders about her daughter.

Sonny Corinthos (Maurice Benard) and Carly Corinthos (Laura Wright) are shown in a calmer moment, looking sad and stoic as they stand outside what used to be the restaurant.

“It’s not supposed to end like this,” Sonny says sadly, apparently not realizing yet that this explosion has Cyrus Renault (Jeff Kober) written all over it.

Viewers then see some other quick flashes of scenes in the promo, including Alexis Davis (Nancy Lee Grahn) with Sam McCall (Kelly Monaco) and Molly Lansing-Davis (Haley Pullos) at her intervention at Sam’s place. It looks like scenes of Alexis’ intervention will be juxtaposed with the action going doing over at The Rib.

Julian Jerome (William deVry) is also shown alive and well in the promo – GH viewers know that Julian was outside of The Floating Rib when he inadvertently detonated the bomb.

It looks like Julian will quickly realize what he’s done, and he’ll need to cover his tracks pronto.

The promo winds down with Carly waiting outside of a makeshift triage area outside of The Floating Rib and looking worried – this indicates that it’s going to take some time to get all the victims out of the building, which makes sense, since there would be rubble from the explosion to dig through.

There could be some tense moments here, as everyone waits to see who comes out alive.

Finally, there’s a chilling audio at the end of the promo, where a woman’s voice is heard saying, “Who died tonight?” That doesn’t bode well for those who were in The Floating Rib, as it looks like we could see at least one death – but viewers will have to tune in to find out for sure what happens!

It looks like we’re in for some intense scenes! We’ll give you updates as GH news comes in. Stick with the ABC soap and don’t forget to check CDL regularly for the latest General Hospital spoilers, daily episode recaps, and news.