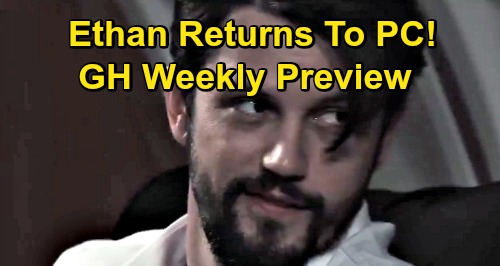 General Hospital (GH) spoilers tease that viewers are in for a big week on the ABC soap. The new GH weekly preview promo is out, and it promises a Big September. This promo moves fast, so let’s get right into it! First off, there are some scenes included in the promo that played out last week in the Monte Carlo casino.

Well, this week, it looks like Ethan will join Robert and Olivia as they travel home to Port Charles. Ethan is shown briefly in the promo on a plane, and other GH spoilers indicate that he’ll be traveling with Robert and Olivia on that plane, and together the trio will surely discuss everything that went down at the casino.

Will Robert and Ethan suspect that Holly Sutton (Emma Samms) is alive, as viewers now know that she is?

The General Hospital preview promo also shows a man shuffling cards, which could be the same hands that viewers saw in the security room at the casino, as he watched Holly being held captive in a room there. One wonders if we’ll see any more of this mystery man now that it seems that Robert, Ethan, and Olivia have left the casino scene.

Next, the promo moves to a spilt screen including Sasha Gilmore (Sofia Mattsson), who looked harried and surprised by something. As GH viewers know, Sasha has been taking drugs here and there to cope with the emotional pain of losing Michael Corinthos (Chad Duell).

We’ll see if she goes any further down that path this week. Alexis Davis (Nancy Lee Grahn) is also included in that split screen – it looks like she’ll be dealing with an Osteoporosis diagnosis this week.

Ava Jerome Cassadine (Maura West) will be dealing with her new normal, which seems tp be a very intimate relationship with her hubby Nikolas Cassadine (Marcus Coloma).

As GH viewers know, Ava and Nikolas made love at the cabin last week, and this week, it seems that Nina Reeves (Cynthia Watros) will hear all about what happened there. “Are you falling for Nikolas?” Nina asks Ava in the promo.

Ned’s also been frustrated since Olivia ran off with Robert, and it looks like Valentin will bear the brunt of that frustration, as Ned decks Valentin big time!

Of course, while it might feel satisfying to Ned in the moment to punch Valentin, in the long run it will probably only cause more problems for him. Valentin clearly has the upper hand at ELQ, and he could really make Ned’s like even more of a living hell than it already is!

Finally, the promo shows Curtis Ashford (Donnell Turner) in a quick scene looking tense, which is no doubt related to the extended reach of Cyrus Renault (Jeff Kober) on Curtis’ family.

And Dante Falconeri (Dominick Zamprogna) is shown getting upset with Dr. Kirk (Christopher Cousins) as Dr. Kirk tells Dante that the offer to release him has been rescinded by the powers that be at the WBS.

Dante is probably more motivated than ever to get home right now, especially since Mike Corbin (Max Gail) has passed away and he senses that his family needs him.

Plus, Dante will probably be growing more interested in the mission involving someone he knows in Port Charles, so we’ll probably see Dante lobby to leave WSB custody pretty heavily in the week to come.

It looks like we’re in for an exciting week, so stay tuned! We’ll give you updates as GH news comes in. Stick with the ABC soap and don’t forget to check CDL often for the latest General Hospital spoilers, news, and daily episode recaps.

Ready to ante up? #GH pic.twitter.com/azqB3ekOkd