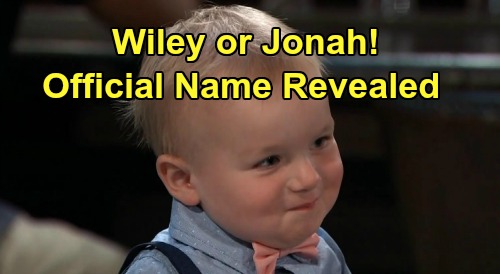 Thankfully, the swap shocker is about to be exposed and that means Michael’s going to be reunited with his child.

However, that also brings up a crucial question – one that’ll affect this kid for the rest of his life. Will he end up sticking with Wiley or ultimately going by the name Jonah? It’s kind of a tricky situation based on “Wiley’s” age. Most baby switch stories on soaps don’t go on this long. When you’re still talking about an infant, there’s no reason to keep the alternate name.

Since General Hospital dragged this baby story out for so long, “Wiley” isn’t really a baby anymore. He knows his name at this age and can respond to it. “Wiley’s” family loves him and has gotten to know him through that cute moniker. It’s honestly a perfect fit, so Michael may not see any reason for a change.

Even Nelle doesn’t seem to mind calling him “Wiley” when she talks to Brad, so GH writers may be sort of phasing the name out. Jonah isn’t a bad name, but Wiley Corinthos sounds better than Jonah Corinthos in some ways.

Plus, there are so many negative connotations for Michael when he thinks of Jonah. He grieved for a child he never lost, so Jonah equals sadness in Michael’s mind. After he gets updates on Nelle’s big news, Michael will undoubtedly think back to holding who he thought was dead Jonah in his arms.

Wouldn’t it be better to just let Wiley keep being Wiley? Michael’s godson has brought nothing but love and joy into his life. Only good things are associated with that name, so we’d say Michael will opt to keep it.

Even if Nelle were to put up a fight, General Hospital spoilers suggest it’s not going to matter. Nelle’s doesn’t get a vote since she chose to keep Michael’s son from him for so long.

What do you think about this name debate? Do you think Michael will stick with Wiley as his son’s name or go back to Jonah like he originally planned? Which name do you like better based on this kid’s looks and personality?

General Hospital spoilers say some adorable father-son moments are on the way, so don’t miss what’s in store. As other GH news and updates emerge, CDL will have plenty of hot posts for you.