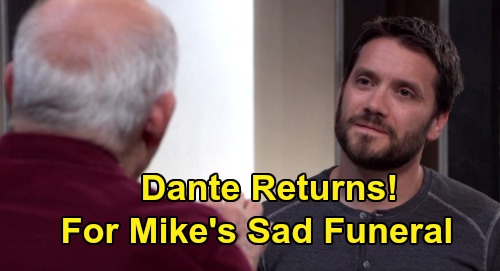 General Hospital (GH) spoilers reveal that Mike Corbin’s (Max Gail) time is about to run out. GH fans have watched Mike’s sad decline play out right before our very eyes. It’s been brutal, but it’s also brought some truly beautiful moments between Mike and his loved ones. Max Gail has delivered some stellar performances and will certainly be missed once he wraps up his GH run.

Unfortunately, that run indeed seems to be ending soon. General Hospital spoilers say Sonny Corinthos (Maurice Benard) will receive horrible news during the week of March 23-27. Sonny will also get a call that summons him to Turning Woods ASAP. Mike’s death may be just around the corner.

General Hospital is definitely inching us closer to the moment when Mike takes his last breath. Of course, that means Sonny will have to prepare for a difficult farewell. Sonny isn’t ready for this goodbye, but can you ever really be ready for one?

That’s especially true since Sonny was at odds with his father for so long. At least Sonny was able to reconnect with Mike during his Alzheimer’s battle and make some positive memories. Sonny can keep those memories forever, but he’ll have to think about the next steps.

General Hospital spoilers state that Mike’s funeral is coming up, so that’ll be a chance for his loved ones to gather and say a few words. Will there be any special guests at this service? It would make sense considering this is going to be a pretty big deal.

Mike’s demise is something GH has been setting up for quite some time. The writers have done their best to portray a realistic, heartbreaking Alzheimer’s story – and they’ve earned loads of praise for it. They’re not going to drop the ball on Mike’s funeral and giving him a proper goodbye.

This is just GH buzz at this point and hasn’t been confirmed, but the possibility of Dante Falconeri’s (Dominic Zamprogna) is floating around. It’s at least worth considering, especially since Zamprogna gave a shoutout to GH fans on Twitter not too long ago. Perhaps Zamprogna secretly filmed some scenes, which would be a good reason for him to offer a little reminder of his role.

Dante shared some sweet scenes with Mike before Zamprogna’s exit, so it’d be nice for Dante to be part of the closure. It’d also give GH viewers a chance to see how Dante’s really doing. Is Dante making progress? Is he still in terrible shape?

The answer could affect Lulu Spencer’s (Emme Rylan) relationship with Dustin Phillips (Mark Lawson), even though Dante would inevitably go back into treatment.

Bottom line, there’d be a lot of potential in a quick Dante comeback. Dante’s name still comes up on the show pretty often, so let’s hope that’s all been paving the way for his return.

We’ll pass along updates as other GH details emerge. Do you think Dante might pop up again for Mike’s funeral? Don’t forget to stop by CDL regularly for other General Hospital spoilers, news and updates.