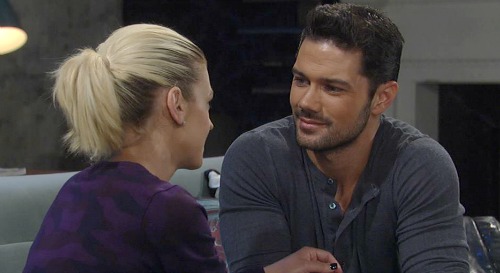 General Hospital (GH) spoilers tease that Maxie Jones (Kirsten Storms) is headed for a shocking split – shocking to her at least! Although it took a while for Maxie to forgive Peter August (Wes Ramsey), she finally managed to trust him again. Maxie struggled to move on following Nathan West’s (Ryan Paevey) death, but Peter mended her broken heart.

Of course, GH viewers know Peter and Maxie’s relationship is actually a ticking time bomb. He’s keeping some truly terrible secrets, so the countdown is on. It won’t be long until Peter’s deception blows up in his face and costs him the family he’s created. Peter wanted to live happily ever after with Maxie and James West, but that dream’s about to be dashed.

General Hospital spoilers, updates and news say Peter’s charade will start to crumble over the next couple weeks. He’s been able to cover his slipups so far, but more mistakes are brewing. Just how many fires can Peter put out? At some point, Peter’s life will crash and burn – not matter how careful or smart he thinks he is.

Once Peter’s horrible actions are exposed, Maxie’s sure to be devastated. She thought Peter had turned from his wicked ways. Since Peter’s gone to such great lengths to deceive Maxie, how can she ever trust him again? Maxie’s already been burned by Peter before, so that’ll make this betrayal even worse.

You can bet Maxie will miss Nathan in the aftermath of all this. Nathan loved Maxie with all his heart and did whatever he could to protect her. Maxie’s bound to beat herself up for trusting Nathan’s sinister half-brother. This would be the perfect time for Nathan’s ghost to pop up and give Maxie some support.

Kiki Jerome (Haley Erin) returned to General Hospital following her death for some dream sequences with Ava. She was a huge part of Ava’s hot plot, so maybe GH will follow a similar path here. Kiki was far from supportive in Ava’s visions, but that made sense for the story. It was all about Ava coping with her guilt and how that guilt manifested in her mind.

As for Maxie, she’ll be feeling crushed, angry and hopeless. A sweet visit from supportive Nathan would be ideal. On Twitter, Ryan Paevey has indicated that he’d be open to the idea of making a comeback. It’d be great if Nathan could return for real, but a ghostly trip home might be nice, too.

Shortly after his demise, GH fans saw a couple of moments where Nathan’s spirit was felt. Would you like to see Nathan come back when Maxie needs him most? Will Maxie get a ghostly visit after her next romantic blowup?