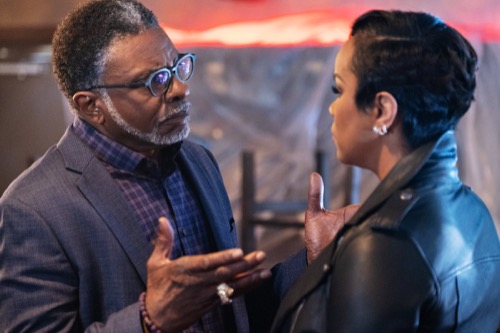 Tonight on the OWN their new series following the Greenleaf family called Greenleaf with an all-new Tuesday, July 28, 2020, season 5 episode 6 and we have your Greenleaf recap below. In tonight’s episode called, “The Sixth Day,”  season 5 episode 6 as per the OWN synopsis, “Bishop reels from the return of an old enemy, pushing Lady Mae to unveil a family secret. Charity makes Phil face his past, while Grace and Darius learn the shocking truth about Bob Whitmore and Edenvale Lending.”

James is speaking on the phone with an agent from the FBI about Rochelle. Mae keeps prodding him in the background to get off the phone. He needs to go to the doctor’s. Grace comes in. James shares the news that Rochelle is no longer a person of interest. James tells them he is headed to meet the city inspector instead. Darius calls. His phone was stolen and he needs some files he gave Grace. She heads to her computer to find they are actively being deleted.

Phil’s father shows up to see Charity, surprising her. Meanwhile, Jacob and Kerissa get ready to take Winkie to a meeting where they plan to tell him they are divorcing. Sophia helps Zora get ready for her trip to New York.

Darius shows up to meet with Phil’s dad, Charity, and Grace. Mr. Shabazz tells them about Edenvale Lending taking advantage of poor black families. He agrees to talk to Phil with Charity. After the meeting, Darius tells Grace he will be ready to talk about their future soon.

Mae meets with Tara about the house. Mae wants to know why Tara is involving her sister. Tara admits if she is given the house, Rochelle may do something bad.

Sophia meets with Jacob and Kerissa to tell them about Zora’s plans to go to New York. While meeting with the inspector, Rochelle shows up to see James. She tells him to tell the truth about her father. He tells her he is innocent and she needs help.

Grace and Noah are at the doctor’s with AJ. Grace cannot believe Noah got AJ to go to the doctors. AJ comes out. He makes some jokes about his parents. He can see why they got together. Noah tells her about a house he found for him and AJ. He offers her a place to stay if Mae decides to give up the house. He tells her he will let her know more about the caretaker of the Greenleaf’s home.

Jacob and Kerissa find Zora and talk to her about going to New York. They know she is older now but they want to help her go safely. She agrees.

Mae and James talk about each of their meetings with Tara and Rochelle. They both argue their sides as to why the previous owner would leave their home to them or Darryl. Jacob interrupts. He wants them to come say goodbye to Winkie and Kerissa. Mae gets irritated and tells him to marry and be faithful next time. After Jacob shuts the door, James tells her to stop being a hypocrite. She lived a lie for 40 years.

Charity brings Phil’s father to see him and Judee. Phil isn’t happy to see him. Meanwhile, Kerissa gets emotional as she packs her last bag to move. She and Jacob talk about their relationship and how they have failed. She tells Jacob he can have shared custody.

After Charity and Phil’s dad explains that Edenvale Lending is predatory, Phil refuses to listen. His dad leaves angry. Charity tells Phil she is going to pray for him. Judee reaches for Phil who pushes her away.

After saying goodbye to Winkie and Kerissa, the Greenleaf family stands on the steps sad. Mae has an announcement. She tells them all Grace is actually the product of her affair with Lionel. Jacob and Charity cannot believe it. They are shocked.

Later, Grace, Charity, and Jacob all sit and talk about Mae’s announcement. Jacob apologizes if he isn’t acting differently. It doesn’t matter to him. Darius calls. A name Phil’s dad gave them panned out and the man is willing to talk about Edenvale’s predatory lending.

Sophia and Zora sit and talk. Sophia is shocked Zora isn’t mad about ratting her out about New York. Zora admits she told Grace about Sophia’s pics.

Grace knocks on Darius’ door. He doesn’t answer. A car pulls up. A man gets out and tells her to let the Edenvale situation go.