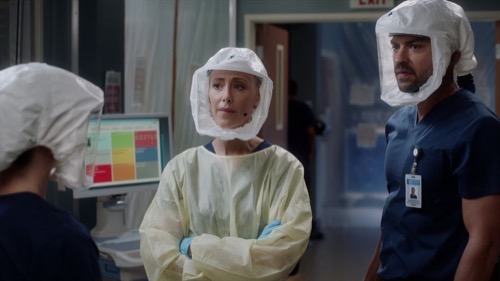 Meanwhile, Jackson and Richard team up against Catherine to teach her a lesson, and Teddy continues to try to mend her frayed relationships. After an intense surgery, Jo is uncertain about her future.”

Meredith’s is responding well to treatment. Her stats are up. She’s breathing easier now and so Richard had been right to agree to the clinical trial from New York. It was helping Meredith. It might now help many more because of how well the current patients are doing and so again Richard made the right decision. Now, if only he could convince his wife to wear a mask. His wife Catherine tends to view the mask like an accessory as in she wearing hanging off of one ear or low on her shin.

She doesn’t wear it like she is supposed to. She also wasn’t afraid to show her doctor son that she wasn’t wearing and that scared Jackson. Jackson knows his mother’s immune system is compromised. She had breast cancer and so he wants her to take better care of herself. And that’s why he turned to Richard.

Jackson wants Richard to talk to Catherine. He thinks his stepfather is the only person who can convince Catherine to wear a mask and so Richard truly is his last hope. Not that Richard believes he can help. Richard knows how stubborn his wife is. He knows that she doesn’t just let anyone convince her of anything and so he didn’t know he was going to get her to wear a mask. He was trying to figure that out as he set up the classrooms for the interns.

The interns that chose to stay were serious about medicine and they each wanted to help. There was one intern who was already an attendee and who had to start over because he left his home country. The U.S. didn’t allow him to carry over his credits. And so he starting again from the bottom.

This new intern was also there as Jo did her best to save the life of Val Ashton. He got to scrub in as Jo did her best to save Val’s life after Val miraculously carried a viable baby in her liver for seven months and he himself because impressed with Jo. Jo saved a woman’s life. She managed to save her even as the liver became damaged and they could only use parts of it. Jo also hasn’t been in the OR in months.

The last time she was there was when she delivered Val’s baby and just that morning she complained that she wasn’t being a surgeon. Jo dreaded going into work. She wasn’t doing surgeries on people who lived anymore and she had to pass a storage truck that was being used to cart a bunch of dead bodies. And so Val’s case helped her remember why she loves this job.

However, the hospital was hit when Koracick was brought in. Koracick’s health took a turn for the worse after he was found incoherent and so he was rushed to Grey Sloan. He was being treated by both Owen and Teddy. They were doing their best to save his life and his case was a tough one. There was the emotional baggage from before. Koracick was still the man that Teddy chose to cheat on Owen with and yet the two of them put that in the past as they chose to help him now.

Koracick was experiencing seizures. He was talking about his dead son as if he was still alive and so Teddy called in Amelia. She thought the son thing was a sign of brain trauma and thankfully Amelia didn’t find anything wrong with Koracick’s brain. He was just dealing with delirium.

Amelia has heard the gossip. She knows what Teddy did and she wasn’t mad at Teddy or wanting to judge her. Amelia told Teddy that she’s done things she’s regretted. Most of them to Owen and so she knew where Teddy was coming from. Amelia was one of the few people to still treat Teddy like nothing ever happened and the rest of the hospital was still giving her a wide berth. Jo was one of the few people to hate Teddy openly.

What Teddy did had reminded Jo of when her husband left her for someone else and so Jo could be downright hostile. Jo was walking through the hallways when a nurse dragged into one of the rooms and she had to deliver a baby. Delivering a baby is such a new thing for her that Jo had wanted to stay to see how it all played out and the nurses had to push her out of the room. They reminded her that the hospital was already understaffed as is.

Koracick left a vacant position when he became sick. The hospital tried to step up, but they were glad Amelia was there because she could take on the tough cases and that allows them to focus on the rest. Bailey also had to step away. She found out her parents’ retirement home had its first case of Covid. So, she sent her husband Ben to go collect her parents.

She wanted to get them out before they could become infected and unfortunately she was too late. Her husband had to bring her mother to the hospital because she was sick. She was suffering from Covid-19 and she also has dementia. Her mother didn’t know where she was or how to vocalize her concerns. She was just panicking because of the new changes and so Bailey had to sing to her to get her to calm down.

Bailey blames herself for her mom getting sick. She was the one that convinced her parents to move to Seattle when her mom first began forgetting things and she asked them to move so that they could be close to their only daughter. Bailey now feels if she had just left things alone then her parents would be home isolating.

Bailey blames herself so much that Maggie had to talk to her and together the two women bonded about being black women in the field of medicine. They were countless times when they were told to shoot for a less important school. Or a school where they would be more “accepted” and they ignored these people. They went to the school they wanted and they graduated top of the class.

Koracick later woke up. He woke up to find Teddy at his bedside and he cracked a joke to make her smile. Koracick was going to be okay. He and Teddy were going to be ok.

Jo meanwhile is thinking of changing specialties because delivering that baby had made her so happy and right now she was hating surgeries because of how depressed it is.

Bailey unfortunately lost her mother tonight, but she had Richard supporting her and Richard had managed to convince his wife to wear the mask.