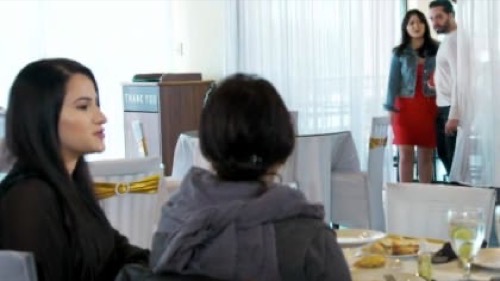 Tonight on TLC their new reality show I Love a Mama’s Boy airs with an all-new Sunday, November 29, 2020 episode and we have your I Love a Mama’s Boy recap below for you. On tonight’s I Love a Mama’s Boy season 1 episode 6 “Mommy’s Choice” as per the TLC Synopsis “Steph makes an attempt to bond with Liz. Justina and her sisters fight off Annette’s wedding dress demands. Emily gives Shekeb an ultimatum after being humiliated by Laila again.”

Laila agrees to lunch with her son Shekeb and his girlfriend. His girlfriend Emily is a nice woman. She’s good to Shekeb and she makes Shekeb happy. Shekeb also wished his girlfriend would get along with his mom. Emily has tried to befriend Laila in the past. It’s always been Laila that pushes Emily away. The two women are at odds and often it was Shekeb stuck in the middle. Shekeb wanted to change this. He spoke with his mother alone and his mother agreed to meet with Emily. She even said she was willing to give Emily a fair chance. Except it was all a lie. Laila was never going to give Emily a chance because Emily is not the Muslim Afghani girl that she wants for a daughter-in-law and that was made very clear tonight when Laila invited a blind date for Shekeb onto her lunch with both Shekeb and Emily.

Laila seriously thought that was a good idea. Laila thought that she was going to invite this other woman into the picture and that Shekeb would fall in love with her. She also assumed that Emily would be so embarrassed that she would be the first to leave. Emily was actually a lot stronger than Laila gives her credit and she genuinely stuck it out. It was Wagma who left first. Wagma was the Muslim Afghani girl that Laila invited. Laila had found out about this girl because she was actively looking for someone and Shekeb and Wagma’s father had suggested Wagma. Wagma was beautiful. She also seemed nice and so she really shouldn’t have been dragged into this because all it did was embarrass her. And it embarrassed Shekeb.

Shekeb had been so upset to find out his mother invited a date for him. He wasn’t single. He was in a relationship and he wanted his mother to respect that. He especially wants his mom to respect Emily. Emily literally asked if there was anything she could do that would change Laila’s opinion of her and Laila replied that there nothing that would make her change her mind. She hates Emily. Emily now hates Laila. Emily demanded that Shekeb take her home and he did. He was the one that drove Emily to the lunch and so it was only fair that he give a ride back, but his mom had been upset that he left with Emily because to Laila it’s a competition and right now Laila is losing that same competition.

Mike didn’t have to worry about that with his mom. His mother Liz didn’t exactly approve of his girlfriend Stephanie and at the same time, she wasn’t trying to sabotage it either. Mike’s mom just wants him to be with someone else. Some safer. Mike learned how to ski and he goes skiing with Stephanie. It’s their thing now. It was so much their thing that Stephanie got the bright idea to invite his mother onto their next skiing trip because she thinks including his mother will help them bond. Stephanie wants Liz to like her and she thinks teaching his mom how to ski will make that happen. She also thinks that if Liz sees Mike being happy that she might change her mind about the ski trips.

Liz didn’t approve of the ski trips. She thought it was too dangerous for her son and so she would hate having seen him go skiing down a mountain. Liz wouldn’t like that at all. She would forbid him from skiing and she would hate Stephanie even more. It was just Stephanie that couldn’t see that. Stephanie has been trying to make Liz like her and she’s being very fake. She wasn’t being her true self at all. Stephanie thought if she was being her true self then maybe Liz would come around and so she wants to show Liz the other side of her personality. She wants to show Liz how fun she can be. Stephanie was so set on Liz that she had been thrown to walk into her apartment and to find Liz cleaning up. She didn’t even know that Liz had a key.

Stephanie tried to ask Mike about it. Only he wouldn’t get into argument with her about his mom and have his mom be in the other room hearing it all. Mike told Stephanie they’ll talk about it later except he didn’t see a problem with his mom having a key. He didn’t know what the big deal was. It was Stephanie who didn’t want Liz snooping through their things or cleaning up after them like they were misbehaving kids. She also worried that his mom would barge in on them and she tried to address it with Mike. She wanted Mike to understand how bad things could get if his mom continues to let herself in. She also wanted to know what happened to her flowers because she got flowers for her birthday and Liz threw them out.

Liz claimed that the flowers were dying. She said they were old and they had gone bad and that didn’t make sense to Stephanie because she had them for less than two weeks. Stephanie thought it was a power play. She was a little upset about it and still she offered to take Liz skiing. She and Mike told Liz about it. Stephanie also offered to personally teach Liz and Liz turned her down flat. Liz said she hated everything about skiing. She didn’t like the cold or how dangerous it was. Liz didn’t even want to go for the bonding. She thinks Stephanie should be catering to her and that they should be doing something that Liz picks out. And so there was nothing Stephanie could do that would make Liz change her mind.

Then there’s Annette. Annette is happy that her son is getting married. She claims she loves Justina because Justina was such a nice woman and yet Annette tries to take advantage of that niceness. She went dress shopping with Justina. She picked a whole bunch of dresses she knows Justina isn’t looking for and still Justina tried them on because she didn’t want to hurt Annette’s feelings. Justina is just too nice sometimes. That’s why it’s great her two older sisters and her future sister-in-law was there because they helped make sure Justina was getting what wants and not what Annette wants. Annette has tried to plan this wedding like it’s hers. She picked out Jason’s tux and she had been hurt to find out he was only going to wear the tux during the afterparty.

Justina hadn’t wanted her husband to wear something that didn’t go with their color scheme. She picked a different suit for him and the red tux gets the afterparty if that. Annette picked the red tux because she said the wedding in Las Vegas and she was thinking of that side of Las Vegas. Only there’s another side to the city. The couple was choosing an old summer camp as the venue for their wedding because it has the rustic chic they love. But Annette didn’t want rustic chic. She wanted to stick close to the Vegas strip and have that kind of Vegas wedding. Annette was so sure about this that she tried to incorporate red into Justina’s wedding dress and Justina had to turn her down. Her dream dress wasn’t going to be that type of Vegas dress.

And Emily lost her cool. She told Shekeb that he has to move out of his mother’s house or they were over.