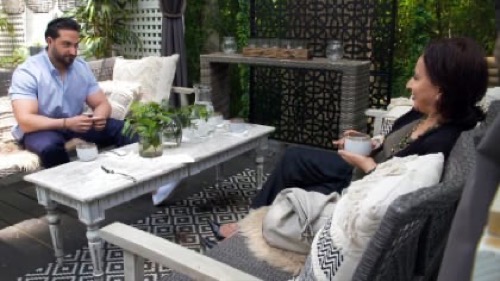 Tonight on TLC their new reality show I Love a Mama’s Boy airs with an all-new Sunday, December 6, 2020 episode and we have your I Love a Mama’s Boy recap below for you. On tonight’s I Love a Mama’s Boy season 1 episode 7 “Tell What?” as per the TLC Synopsis “Tim finds herself losing patience with Matt and Kelly. Justina finally confronts Annette. Laila learns Shekeb wants to move out of her house.”

In Illinois, Justina’s sister flew in from Vegas to help her find a wedding dress. Afterwards, they go for drinks. Jason’s mom Annette was at dress shopping and she was trying to insist that Justina wear a red band around the waist of her dress to match Jason’s tux, and nobody else was impressed with it. Justina realizes that she needs to speak up for herself for Annette to respect her. But, she is afraid if she is direct with her, Jason might be upset with her.

California, Matt tells his mom Kelly that he wants to surprise Kim for her birthday. He spoke to his mom first and got her blessing on it. Matt goes to see Kim and tells her that with her complaints about them not having their own space and being intimate, he has a little surprise that might help. She says before that, they need to talk. She couldn’t believe how involved his mother is with the architect, and she wants to get to a place where they agree on things and Kelly is not involved. She says that everything revolves around what his mother wants and she has to take a step back.

He tells her that he would never tell his mother to butt out. Kelly walks into the room and dressed as Lady Liberty, she tells Kim to guess where she is going for her birthday, the big apple. Kelly reveals that she is going with them and it will be fun. Kim can’t believe this and wonders if she is being pranked. Matt tries to reassure her that it will be fine. She tells him that she loves him and she is excited about the trip, but they will just have to see how things go.

Georgia, Emily gave Shekab an ultimatum that he had to move out of his mother’s house or they are over as a couple. They are looking at an apartment, and the next stage of their relationship. Shekeb’s mom, Laila, would be upset if she knew they were looking at new places without her. Emily is happy they are looking at apartments, but if he doesn’t come through and move out, she is done. He says he is scared, Laila is going to be against it. She tells him that he is not a man until he tells his mom that he is moving out of the house. He says he will do it, even though he is nervous about it. She tells him that she can’t wait to move in with him.

Illinois, Annette, Jason and Justina take Taylor to the toy store because they have been working on potty training and it has been going really good. Jason tells her that she is getting one toy, and Annette butts in and says she will buy her whatever she wants. Annette gets into an argument with Jason about it, but she just won’t listen. Justina tells Annette that she knows that she wants to spoil her, but they want her to have structure. Jason knows he has to pick up for Justina, and Taylor too. Annette asks if they decided on the venue, she is terrified that Justina’s sister brought up the summer camp. Justina says they are not giving details yet.

Connecticut, Coronavirus is starting and so is lockdowns.

Laila is a complete germaphobe and because of COVID, Shekab’s plans with Emily to get an apartment have now been put on hold. She tells Shekab that his other is acting crazier since the virus.

Meanwhile, Kim says COVID Is her nightmare since they are couped up in the house. The construction of Kim and Matt’s home has been put on hold. Kim is on the phone with her friend, Danielle, she needs someone to vent to. She tells her that Kelly is competing for Matt’s attention and it is awkward, because she is his mom. Danielle tells her not to let Matt to put his mom first and her second.

Danielle is worried about how close Matt is with his mom and she is worried about Kim. Kim tells Danielle about the trip to New York, but in the end it was cancelled. Danielle thinks Matt is a great guy, he is usually supportive and is surprised how things are going because he is so close to his mother. Kim says she is on the fence about how she is feeling, she is starting to have some serious doubts about their relationship.

Illinois, Justina invites Annette over for tea to talk, just the two of them. Annette’s not looking forward to this. Annette says that when COVID started she was willing to pack a bag and move in to help. Justina says she appreciates it, but they worked things out. They talk about the wedding and Annette says it doesn’t make sense that they are thinking of a summer camp wedding. Annette says she has other things in mind and she doesn’t think it is normal for a son to be against his mother. Annette wants a venue on the strip in Las Vegas.

Justina says they don’t want their wedding in Vegas and she is being too pushy. Justina feels good, she finally said what she wanted to. She tells Annette that it is not east to speak to her, but it will make them stronger. Annette doesn’t care what Justina says, she thinks she is going to win and they are going to get married on the Vegas strip.

California, Kim is gardening, she feels like she is about to lose her mind. Kelly and Matt are both working from home full-time and she doesn’t even want to be in the house anymore. Matt loves being home, and doesn’t like that Kim is not happy. Kim tells him that it is hard with the three of them living together and now that the house is pushed off, she is worried that they are not going to meet their goals.

She thought they would already be moving into their new house in a few months. She tells him that maybe he is not ready for the next step if he is not prioritizing her. Matt is having a hard time keeping both women happy. She tells him that she loves him but he is not giving her what she needs and she just can’t continue waiting.

Shekab is in the car with his mother, Laila, she tells him that it is good to be out with him. Laila is so happy that Emily is not there. Shekab tells his mother that he wants to be with Emily and she needs to accept it or it is going to damage their relationship. She tells him that every time he talks about Emily her blood pressure goes up. He tells her to stop stressing him out. She says get rid of Emily and things will go well. All of a sudden, Emily shows up, Leila is not happy and asks Shekab why she is there.