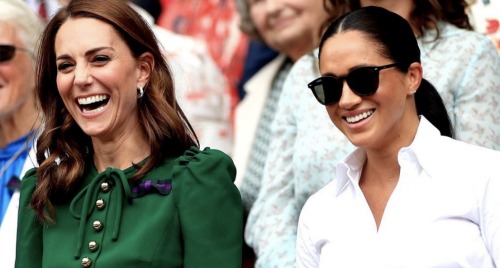 Kate Middleton took particular exception to claims made by Tatler in its July/August issue for one big reason – she’s anxious to put a stop to the incessant comparisons between herself and Meghan Markle, or so says a former royal editor.

The Palace is quite upset about claims made by the magazine that Kate feels “exhausted and trapped” by her royal workload in the weeks following Prince Harry and Meghan Markle’s decision to walk away from their royal duties. In fact, Prince William and Kate Middleton have sent threatening legal letters to the magazine and are considering formal legal action.

William and Kate even demanded that the digital version of the story be permanently removed from the internet. For its part, the magazine has stated that it stands by the article’s author and its sources, and it is acting quite unafraid of the threats of legal action on the part of William and Kate.

Well, now a former royal editor has spoken out to OK! Magazine. The editor, Duncan Larcombe, has said that Kate Middleton is quite upset over the article because she is “very keen” to end comparisons that seem to be constantly made between herself and Meghan Markle. Larcombe said: “It’s almost as though they want to draw a line in the sand where it’s gone a bit too far.”

Kensington Palace issued a statement after the Tatler article was published, saying that the story contained a “swathe of inaccuracies and false misrepresentations which were to put to Kensington Palace prior to publication.”

But Tatler fought back in the press, saying that the Kensington Palace knew about the story since Prince William and Kate Middleton were asked to cooperate with the piece.

We’ll have to wait and see if Prince William and Kate Middleton follow through on their threat of legal action against the magazine, but if they do, it seems that they’re up for quite a fight. B

At this point it seems that the harder the royal couple fight Tatler, the more they may be drawing attention to the article’s claims, so it seems like a no-win situation for William and Kate.

Do you think there’s some truth to the former royal editor’s theory about the root of Prince William and Kate Middleton’s anger over the Tatler article? Do you believe that Kate is sick of being compared to Meghan Markle? Keep reading CDL for more British royals news and updates.