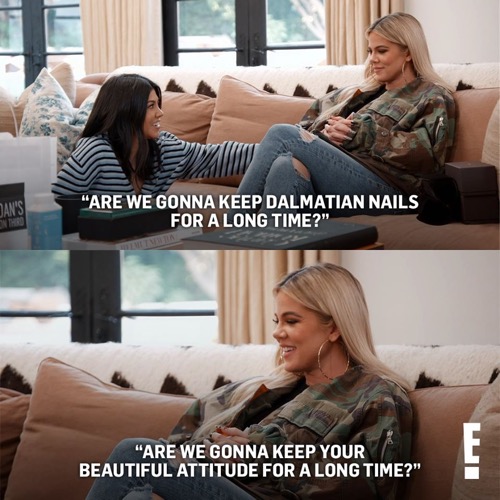 Tonight E!’s most-watched series Keeping Up With The Kardashians (KUWTK) returns with an all-new Sunday, April 23, 2020, season 18 episode 5 and we have your KUWTK recap below.  On tonight’s KUWTK season 18 episode 4 season called, “Surprise, Surprise,” as per the E! synopsis, “During a whirlwind week of birthdays, Khloe and Kim plan an epic surprise to celebrate Corey.

Khloe must choose between freezing her eggs and making embryos with her ex. Kim races against the clock to help an incarcerated man whose execution is days away.”

There were so many birthdays around Halloween. The family went to a party for Kendall and then their mother’s birthday was coming up. Kim decided to do something special for her mom. She was going through a nostalgia party for her. This party was going to have her mom’s favorite restaurant from back in the day and there were going to be some cars as well as cushion patterns to match the old wallpaper they used to have in the kitchen. Kim was going to go big for Kris. She was putting together such an awesome party that it made Khloe realize that they should do something for Kris’s boyfriend Corey.

Corey’s birthday was coming up as well. The sisters have never really celebrated his birthday with him. They’ve had problems in the past with him and so they hadn’t felt comfortable with doing anything. But things have changed. Corey has been in their lives for years. He deserved some kind of recognition and Khloe had the greatest idea. She thought they should take Corey to Napa. He was supposed to go the year before and the fires had made him and Kris cancel their trip. Khloe decided to take Corey to Napa so he wouldn’t be missing out. She knows its something he wants to do and so she was excited.

The sisters were finally going to celebrate Corey’s birthday. They were first going to pretend like they forget it was his birthday and afterward they were going to spring on the surprise. It was going to be such a surprise that the sisters weren’t even going to tell their mom. They went ahead with their mother’s party and they made her feel her so special that she wanted Corey to have that as well. She thought about taking him to Palm Springs. She also invited her daughters to come along because they’ve never celebrated Corey’s birthday as a family and Kris wanted to do that for him. She was set on it that she almost ruined the girls’ surprise.

They couldn’t tell her they had made plans for Corey. They instead came up with excuses for why they couldn’t go with Kris to Palm Springs and they had to say no to Kylie’s surprise for Corey. The youngest sister put together a birthday dinner for him. Kylie had wanted to make him feel special because she hadn’t known about Khloe’s plan and so now it looks really bad that Khloe and Kim couldn’t make it to the dinner. They’ve bailed on two separate occasions for Corey. They thought he might think they were jerks now so they were counting on their Napa to change his idea about them.

Khloe also went ahead with harvesting her eggs. She was left pretty bruised afterward and still, it had been worth it. Khloe wants to have more children. She just doesn’t know if she wants more children with Tristan. He offered to be her sperm donor and Khloe wasn’t sure if she wanted to take him up on that offer. She knows it will be better if she has embryos waiting for her rather than just eggs. She also knows how quickly her future can change. She could meet someone tomorrow and they could want to have kids a year from now. Khloe doesn’t want to shut that door in the future. She doesn’t want to tie up her eggs with her ex and so Khloe has a decision to make.

In the meantime, she went ahead with the birthday surprise for Corey. The sisters had gotten all their schedules to align and they tricked Kris and Corey into coming to see the plane by pretending Kanye was going to buy one. The sisters knew the idea of a plane would draw Kris out. They also knew Corey would follow and so it was the perfect plan. They later surprised the pair with Corey’s birthday trip. They had already cleared it with Kris’s assistant and so the couple easily traveled to Napa. They got to do the trip. They did excursions and they truly celebrated Corey. Corey was so happy on his trip.

Corey had fun. Kris had fun. The girls also got to talk and so Kim and Kourtney offered Khloe some advice on using Tristan as a sperm donor. They told her not to go ahead with the embryos. They didn’t want her wasting good eggs on Tristan and so they stopped just short of saying so. They instead said she should wait and see how many of her eggs are viable. The sisters later wait at a winery because they were in Napa and that’s what you do there. They all had fun at the winery. They watched as their mom got drunk. Kris became comical when she started drinking and the trip got real fun real quick.

The flew back to LA after Corey’s birthday. Kim decided to focus all her energy on helping Rodney Reed. Reed was accused of murdering a young woman and he’s been on death row for years now. The evidence in his case was circumstantial. They never tested the murder weapon for DNA and so Kim tried to get him proper representation before he’s executed for a possible crime he didn’t commit. Kim has been doing a lot to help prisoners. She’s been trying to get them a fair hearing and she’s been doing really well with that. She helped several people be released from prison. She’s doing great work with prisoner reform and it’s a good thing she’s continuing with it.

Kim was doing that while Khloe heard back about her eggs. She has twelve viable eggs and she would feel better about it if she turned five of them into embryos. So, she is going ahead with turning some of them.