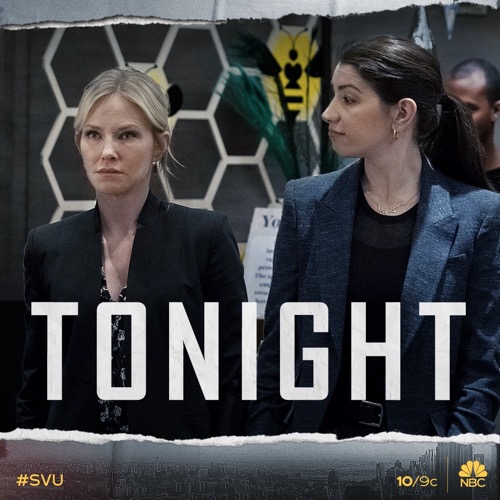 Tonight on NBC Law & Order SVU returns with an all-new Thursday, February 20, 2020 episode and we have your Law & Order SVU recap below.  On tonight’s Law & Order SVU season 21 episode 15 as per the NBC synopsis, “Chief Garland must put friendship aside when a pastor at his church is arrested.”

All of the ladies of SVU are attending a women’s empowerment convention. Olivia is there to speak about trauma and awareness.

Later the CEO of the convention, Luna, is paid a visit by Bobby her CFO. Luna is in lingerie drinking tequila and eating edibles. He tries to talk business with her but she becomes irritated and just wants to party.

Luna’s assistant calls Olivia who rushes to her aid. Luna tells Olivia she was raped. After arriving at the hospital, Olivia starts to question Luna will decide she doesn’t wanna press charges because it’ll ruin her brand.

Olivia and Amanda go to visit Bobby who tells him that the sex was consensual. He tells them that Luna is involved with her assistant and she is probably claiming rape so that her assistant won’t break up with her. Kat goes to talk with Luna‘s assistant to confront her about their relationship. Luna’s assistant claims that Bobby is mad because he couldn’t make her happy.

Olivia returns back to Luna who decides she will press charges after all. Olivia goes to pick up Bobby who is at a dinner meeting in a restaurant. Just as she is ready to cut him he tells her that Luna has been robbing the company and that is why she’s claiming rape.

Back at the precinct, Bobby details exactly what happened when he went to go see Luna about stealing from the company. It was after he confronted her that she tried to seduce him and he fell for it. That is when her assistant walked in and she claimed rape.

Carisi and Amanda do some digging, asking several of Luna’s employees about checks she had written to herself. Kat talks to one employee who received a check of her own. She admits that it was payment after Luna sexually assaulted her.

Amanda and Olivia bring Luna in for questioning. She brings her lawyer. Olivia and Amanda also ask her about several NDA’s they have managed to track down. After Carisi talks to another one of Luna’s assistants, Olivia and Amanda arrest Luna.

After Luna is taken into custody and refused bail, her company announces her firing.

Carisi and Olivia visit Luna the next day in jail who is with her lawyer. She tells them how she was attacked and she thinks she’s losing her mind. She wants to change her plea to guilty. She begins to snap laughing and crying and slamming her hands down on the table. Carisi wonders if it’s so that she can plead insanity but Olivia thinks that she is either being framed or she is split personality.

After some discussion Carisi and Olivia visit the prosecutor. They believe she’s being framed by several people in her company. The prosecutor wants to move forward with the case so that if Luna is being framed those individuals won’t realize they are on to them.

The next day they meet with one of the people from her company that they believe is framing her. The woman is young and the weakest link of the bunch. After they discuss how she will be under oath in front of a grand jury with the hopes of putting Luna away for years she begins to crumble. After some time she finally snaps and admits that the whole thing was to save the company from Luna.

The team is forced to re-interview everybody including Melanie, a woman on Luna’s staff who is also an old childhood friend. she tells them how Luna has been gaslighting her since they were kids so she decided to gaslight her right back.