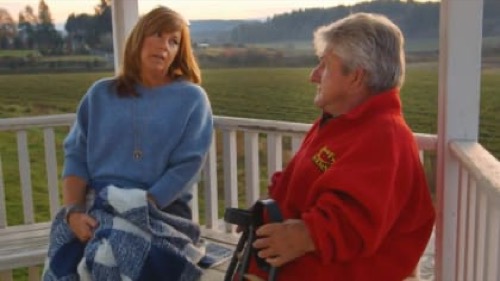 Zach and Tori plan for a low-key Christmas as they adjust to life with baby Lilah, but Matt makes sure Jackson has the full holiday experience.”

Lilah has been home for a couple of weeks, she has been a little fussier, and particular. Tori is happy not to be pregnant anymore, and Jackson is loving being a big brother. Jackson is pressing Zach’s buttons, but Tori’s specialty is discipline.

Matt is on the farm, he bought the south side outright and is very excited about it. Amy is living on the north side, she bought a new house and will be moving out soon. Matt wants to buy Amy out of the north side of the farm. The big reason he wants to get this done is for closure for the family. Matt goes for a walk with Caryn and tells her that he is thinking of buying Amy’s side of the farm. She says it is a big undertaking and she wants him to think about this one before he makes a decision. Matt says that he can make Amy an offer and if she accepts it, then great. Caryn is not fond of the whole idea because Amy is very slow at making decisions and may become dragged out for a long time.

Amy is on her way to meet Matt, he asked her to go over. Amy has a lot going on right now, she is still trying to pack off the farm, but at least she and Chris are making headway at the new house. Matt tells her that he would like to buy her out of the farm. He says that he has already let Jeremy and Zach know of his plans, and wants to get it done by the end of the year. Amy has five weeks to make her decision. Matt tells her that it includes the pumpkin business, they both go hand in hand. Amy says it is the holidays, that doesn’t give much time. He tells her that they can get it settled and go into the new year clean as a whistle. Amy tells him that she will let him know, she leaves. Amy doesn’t think it is enough time to sell a big piece of real estate and a business that they both created.

Matt meets up with Zach, he says that Lilah is feeding every three hours, so it is a lot of work right now. Zach asks Matt what he is doing for the holidays, he says he is hanging around. Matt tells him that he has a lot on his plate, it has been four weeks and he has yet to hear from Amy about selling the farm. Zach is a fan of Matt buying the farm, he thinks it will be good for everyone.

Chris and Amy are out to dinner. Life on the farm has definitely changed for Amy, leaving after 30 years is not easy. After Christmas, she is going to do a partial move in – it will be strange not waking up on the farm, but she is excited about the new adventure. Chris asks when he should move his things in, she really doesn’t answer. He says he has to renovate his two bathrooms first, so he can rent his place. Amy finds it is overwhelming to sign all the papers for the farm before the holiday, and she is not good at negotiating. She has an appointment with a lawyer later that week to take a look at the paperwork. Matt thinks the offer is fair and wants a quick decision, but Amy is looking out for herself and plans on making sure she gets a fair deal.

Amy stops over at Zach and Tori’s house and brings a tray full of mac and cheese for the family. They sit at the table and eat, Amy holds Lilah and soothes her. Zach asks Amy what she is doing for Christmas, she invites them over to her new house. Amy wants to keep up her old traditions in the new house. Zach asks about the agreement with Matt, she says he would like her to sign it right away, but she needs time.

Matt is in his office and thinking about the offer to Amy, it is imperative that he get this done this year. Amy knocks on his door, she goes inside and tells her that she needs more information. They quickly start getting into an argument, she tells him that she is offended by his offer, that he expected her to sign it the next day on the dotted line. He says he feels that she wants to move on. She says yes, but it is the business that bothers her. Matt intimidates her, she feels she has no confidence when she deals with him.

Since Zach and Tori are busy with baby Lilah, Matt has enlisted some help to get Christmas lights on the house. Matt and Caryn drop by their house, they talk about Amy and Matt doesn’t think the deal is going to go through before the end of the year. Everyone goes outside, they flip the switch and the Christmas lights come on, it is very pretty and Jackson looks very happy.

Matt has decided not to purchase the farm. The offer had specific time frames and it has come and gone. He thinks Amy has a lot of emotions to go through to leave the farm, and he understands that. At Amy’s house, everyone is on their way over for Christmas. She finds it fun to put up her tree and make her first meal in her new kitchen. Zach and Tori arrive with the children. Tori loves Christmas, she has the children in matching outfits. Zach is really happy that Chris in his mom’s life, so she is not alone after the divorce.

This is the first meal that Amy has prepared in her new home. After dinner, Jackson decorates cookies with Amy. Amy gave a counteroffer to Matt, but he wouldn’t take it because it was after the time frame and she is frustrated. Amy tells Zach that it moved as fast as it could because she needed to do to her due diligence. Zach thinks his mom needs to have a little more intensity and his father needs to relax a bit.