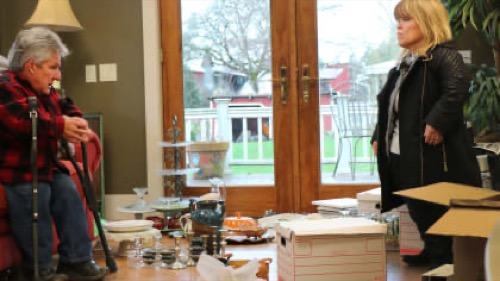 Matt and Caryn are in the garage on Amy’s side of the farm, he has a collection of Volkswagens and knows that he has to get them on his south side of the farm. Matt says because the deal didn’t work out with Amy for the north side of the property, they are going to put everything on the table and maybe, go to the open market. Although, he would definitely like to see the kids buy the house. He wants to talk to Amy and see what kind of work has to be done in the house to make it presentable. Step one, Amy has to get his stuff out. Matt doesn’t want Amy to use the farmhouse as a storage facility. Caryn thinks maybe Amy is lingering because it is hard for her to leave the farm.

Zach and Tori are home, they are doing tummy time with Lilah, it is important at her age. Although Lilah doesn’t do too well and acts like her head weighs fifty pounds. Jackson gets on the floor and he does the exercise with Lilah. Zach tells Tori that his dad rescinded his offer to Amy. Tori really doesn’t like to talk about it because she feels fed up with this whole subject.

Matt heads over to the farmhouse to see if there is anything he can help with, or lend a hand. He finds the house a mess and thinks Amy needs help to go through everything. Amy says everything is spread around because she can’t take everything and has decided what she wants. She asks if they are selling, he says not necessarily, they could rent. She accuses him of having taken his offer off the table, he says he can’t keep it there forever. Matt says if she picks through what she wants, it will just take a couple of hours for everyone to help out to clean up the house. Matt thinks she is a hoarder and this is a monster undertaking that she cannot do herself. Amy knows there are a lot of memories and feels she just needs time. Matt tells her that if she needs his help, just ask, she says no, he leaves.

Zach goes over to the farmhouse to see how Amy is doing. When he gets there, she tells him that she has movers come over to get the big stuff. Zach hopes that her moving stuff will encourage her to clean up everything. She realizes that she has a lot of stuff to go through. Tori says that all the Roloffs have a hoarding tendency, but Amy is on a whole other level. Zach says he is not like his mom. Tori says that if any of Amy’s clown collection shows up at her place, she is moving. They talk about Matt’s offer taken off the table, Amy says that she is keeping to her time table and won’t be rushed. Zach feels if they both could compromise this could be resolved. The movers show up, Amy finds it nerve-racking, she actually won’t be sleeping in the farmhouse. Chris is happy she is moving to the new house and looks forward to moving in with her and starting their new life.

Amy is having a hard time with the move, she never planned on leaving and this is a big era of her life over. She honestly thought she would die in the house, she feels it still hasn’t hit it, its surreal. Chris heads over to the new house and organizes everything being moved in. Amy is happy having a partner helping her get everything done. Chris is looking forward to making new memories with Amy.

Tori has been invited to a spa day for her friend’s birthday, Zach is going to stay home and watch the two kids. It doesn’t take long for Jackson to test Zach and for Lilah to start crying.

It’s been a few days at Amy’s new house, she is doing ok. Amy tells Chris she wants to go to a furniture store. He tells her that he is ordering his coffee table for him.

Zach is still watching the kids and thinks he may have been overly confident. Amy and Chris decide to drop by to help out, Zach is thankful he can change his shirt because Lilah spits up on him. Chris expresses frustration with how slow things are going with Amy and the move. Amy gets Lilah down for a nap and she and Chris leave.

Caryn goes to see Matt in the house and asks how it is going at the farmhouse. He says that she needs help, there is just too much stuff for one person to handle. Matt is already trying to line up contractors for the outside of the house. Caryn is frustrated and doesn’t think it is fair to them to have to continue dealing with this. She tells Matt that sometimes she feels that he is still married to Amy.

Tori is home, Jackson is thrilled to see her. Zach says they had a good day after Jackson tested him in the beginning.

Jackson and Zach are outside and Matt drives up. Matt tells Zach since he can’t get inside, he plans on doing cleaning and repairs on the outside. Zach says Amy needs help.