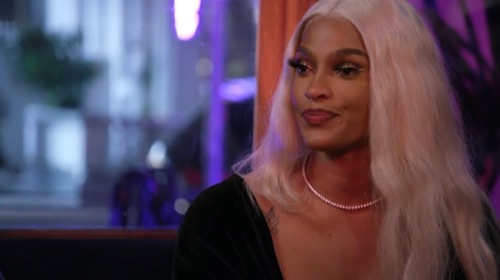 Miami Tip tries to calm the escalating drama between Sukihana and Nikki Natural, and Joseline decides she can’t let Premadonna back into Miami without a welcome home gift.”

Tonight on love and hip hop Miami, Amara is still feeling sick while Emjay and Julian argued they decide to leave the club and go home.

Hood brat brings up the face that Nikki Natural said she was better than her at Trina’s audition which upsets Suki, Suki goes to confront her at the bar and she admits to saying it but Shay feels a way on how Suki approached Nikki and they begin to physically fight. Shay is escorted outside.

PreMadonna is planning her launch party for her pressure cooker and seasoning line, Tip and she discusses her managing Suki and the fact that she has a lot of work to do. Tip tells PreMadonna she feels as if she turned her back on her when she left Miami and went to Atlanta, PreMadonna tells her that wasn’t her intention she just wanted to make sure she was financially set up.

Emjay and Amara talk about the night Julian tried to get into her bed drunk at 3 am in the morning and made her feel uncomfortable, Amara is upset Emjay brought this up to Julian saying it was a mistake and that the conversation was private. She worries how this will affect her and Julians work relationship Emjay says she doesn’t need Julian and he’s brainwashing her to think that she needs him, Emjya tells Amara to meet with her lawyers to opt-out of the contract he reassured her that he’s in her corner and has her back.

Suki and Tip discuss what happened at the party and say she was defending herself and Tip tells her there’s too much on the line and she has an image and brand to build but can’t do that if Suki is out fighting everyone. Nikki admits to Shay that she stole Suki’s phone during the fight and says she won’t give it back until she comes to see her and says she took it to teach her a lesson to not roll up on her like that again.

Trick admits to still being in love with Joy while they discuss what’s going on with him and Nikki. Joy feels this is a problem because she still wants a divorce but doesn’t want to lose him as a friend. Briscoe admits he needs to apologize to trick about the whole Nikki drama from Joy implying they slept together.

Hoodbrat reveals that she’s rapping to take care of her sister’s kids after she killed herself and promises them that she will make it to success so that they can be financially stable.

Joy, Trina, and Joseline meet up to discuss all the drama at Briscoe’s party, PreMadonna’s name is brought up and Joseline states she doesn’t like her at all. Trina suggests they meet up to squash the beef and Joseline decides to send her a gift at PreMadonna launch party.

It’s the night of PreMadonna launch party everyone is in white to symbolize peace and her in green to symbolize money. Brisco clears up the Nikki situation and trick says it’s ok because he wasn’t feeling Nikki’s vibe and that they will never beef over a woman and that they were friends before Nikki. During PreMadonna speech, a truck begins to back up into the lot where everyone is and it’s Joseline on the screen calling PreMadonna Ms piggy and says there’s a gift in the trunk when the trunk is open two men bring out a slaughtered pig on a platter with apples in its mouth.