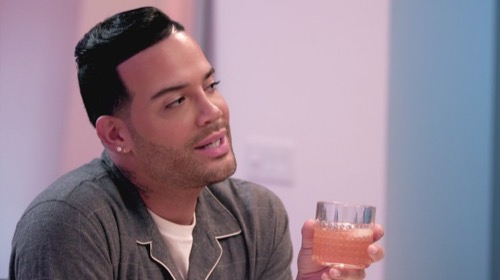 Jim Jones learns to cook with Joe to rekindle his romance with Chrissy, and Jada demands her money back from PHresher.”

Tonight on Love and hip hop NY, Erica and Tahiry discuss the wedding day and both call Jonathan a wedding crasher, she gets upset saying Jonathan came to spy on Tahiry and Joe for Cyn since she wasn’t invited and at the wedding, they decide to invite him to Erica’s birthday party to tell him she wants to be stake free and stress-free. Joe attempts to get him on his podcast show. They meet at a cooking class where Jim wants to learn how to cook a meal for Chrissy. They both discuss the issues within their relationships. As far as Jim spending time with Chrissy being busy with his weed business. Jim agrees to appear on Joe’s podcast show.

Phresher and meet up to talk about the money issue between him and Jada and her claims of owing her $60k Jenn asks him if they slept together and he denies it. He says Jada is lying and says he was trying to make the situation right, Jenn doesn’t believe him though and begins to physically attack Phresher.

Cyn and Jonothan talk about what happened at Erica’s wedding. Cyn says she doesn’t respect Tahiry as a woman and thinks her and Joe’s friendship is fake.

Tahiry gets news from her mammogram results that it’s unclear and had to go in for more testing, the news scares her. Phresher goes to meet up with the guys Safaree and Papoose to get advice on his situation, papoose advises him to go speak to Jada and take her head on and tell her that he’s about his family now and tells him to make things right.

Jim cooks a shrimp dumpling meal for Chrissy that he learned to form the cooking class. Chrissy is shocked that it actually tastes good, Jim tells her that he respects her as his woman, Chrissy tells him that she’s ok of they never get married because there bond is so strong and Jim tells her he does want to eventually get married but Chrissy says that’s not important to her anymore and doesn’t want it to ruin their relationship and put extra pressure on them.

Phresher goes to meet with Jada and she brings to question what she was to him and says she had no choice but to go confront Jenn and says she just wants her money back he says they can figure out a number that he’d repay her back and says he can give her back 35k, he admits that him sleeping with Jada was wrong, which losses Jada off he says now he is committed to his kids and family they agree that he’ll repay her 40k.

It’s Erica’s birthday party but it looks like Safaree has all his images around the event which leads them to question if the event is for him or her she begins to cry and He gets up on stage and performs a song for her which has her and makes her smile, he presents her with a dog for her birthday. Cyn and Jonothan walk in. They all sit at the bar and begin to discuss Tahiry and Joe’s relationship, Tahiry tries to clear the air but her and Jonathan get into it she feels Jonathan has been attacking her for weeks and it boils over she’s asks the camera crew to stop filming.