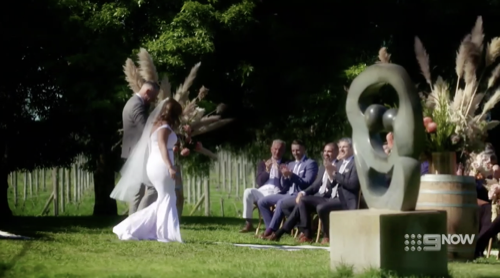 It’s Final Decision time! The couples each entered the experiment as a person looking for love and so tonight answers the question if they’ve found it or not? Tonight, the couples have to decide if they wish to be together after the experiment was over. This was their final decision. Hence the name for the occasion and this is it. The couples had intense time in the experiment with everything they lived through and so they should now whether or not they want to be together. Mishel for one knows there’s no future for her marriage to Steve. Steve is not attracted to her. He doesn’t find her sexually appealing because he prefers women who are younger than her and who tend to be taller.

Mishel was not Steve’s type. She was what the relationship experts thought Steve needed and so no one really asked him. No one asked Steve how far out of his usual dating patterns he was willing to go. Steve talked big about trying new things and it turns out he’s still the same old Steve. He likes what he likes and he wasn’t attracted to Mishel. Steve should have been honest about his feelings with Mishel. He should have told her there was no hope for their relationship and instead, he strung her along. In fact, Steve downright played mind games with her. Steve kept giving Mishel hope that one day his feelings might change and that his attraction was shifting every day.

Mishel bought what he was selling at first. She didn’t realize how manipulative Steve was being with her until she started asking the hard questions and Steve more or less told her there was no future for them. He had actually tripped himself up because he started talking about dating women his own age now. So, he didn’t really mean to tell Mishel that he was going to be dating in the near future and so that was a big clue for Mishel. Mishel chose to still be close to Steve after his slip-up. They remained friends and that’s all they’ll ever be. They’re really good friends. Mishel saw it for herself when she and Steve separated.

The couples returned home alone. They were given time to think about their futures and who they wanted in that future. Mishel and Steve found it hard to split up. They shed some tears as they were saying goodbye and so Steve said that must mean they care for each other. He was still operating under the theory that the feelings will grow over time. Steve wasn’t taking into account the other things that were going on like how he didn’t want to kiss his wife and how he showed Mishel in little ways that he’s not attracted to her. Mishel on the other hand was remembering all of those encounters while she was back home.

Mishel realized she had lost herself in her relationship with Steve. He was the one who took control of the conversation and the marriage itself. It was his feelings that were stopping from exploring any sign of intimacy. It was him that he was deciding on each and every aspect of their marriage and Mishel’s family and friends called it as they see it. They told Mishel she was getting wrapped up in Steve’s bullsh*t. Mishel’s daughter told her that she was missing out because she was always going along with what Steve wanted and so Mishel came back to herself. She remembered what she was like at the beginning.

Mishel came into the experiment so full of excitement. She was a sexually confident woman who knew what she wanted and what she liked. Over time, Mishel forgets that. She forgot who she was and she allowed Steve to override her own desires. She didn’t know it at the time, but she realizes it now and she knows now there is no future for them as a couple. Mishel wanted to be desired. She wanted to feel like that confident woman again. She couldn’t be who she was and tell Steve “yes”. He would just dominate the relationship again. He would string her along and get her so confused that she didn’t up from down.

There was no future in that. Mishel knew her answer was going to be a “no” for the Final Decision and she tried to find ways to tell him while still being honest to herself. The experiment wasn’t all bad. She learned a lot even if they weren’t going to be together and at the same time she suspected his answer was going to be different from hers. She wasn’t wrong. Steve planned on saying yes and he truly thought they were going to renew their vows on the big day. Steve was so sure of himself that he said he would be shocked if Mishel didn’t say yes as well because he knows she cares about him and he arrogantly believed that meant Mishel would go along with his half-in/half-out relationship.

The final decision came as a shock for both of them. Mishel thought Steve would finally be honest about their relationship and Steve thought he could continue to string her along. It turns out neither of them was going to be happy. Mishel told Steve everything he did to her. She told him that he wore her down over time and she also told him her answer was “no”. Mishel didn’t even care about their legendary friendship at the end. She was just so down with it all that she let Steve know and Steve took it badly. He couldn’t believe that Mishel rejected him. He walked away at the end still in shock and he’s going sometime to fully understand that Mishel told him no because it was what was best for her. Not him.

The second couple tonight facing this big decision was Seb and Lizzie. This couple has come a long way in the experiment as they didn’t have as long of a time to get to know each other as some of the others did and so they made the best of what they did have. The couple came to the bond with their quirky characteristics. They enjoyed laughing together and they supported each other against outside forces. Seb and Lizzie appeared to be happy. They liked being around each other even if they never used the word “love” and so their temporary separation had been especially hard on them. They were genuinely heartbroken when they said goodbye to each other at the apartment.

Both Seb and Lizzie returned to their everyday lives. They didn’t realize how much they were going to miss each other until they were separated and they couldn’t help thinking about the other. Seb and Lizzie seemed like they wanted to be together at first. Then came their self-sabotaging ways. Seb was single for eight years and commitment was going to be difficult for him. He sometimes pushes people away. He doesn’t always mean to do that and so it was self-protection. He thought if he pushed people away then maybe they wouldn’t get the chance to hurt him. Only Seb doesn’t want to repeat his behavior with Lizzie.

Seb wants to be with Lizzie. He was scared that his past and the fact he didn’t really know what to do with his future was going to be a problem for her. Lizzie’s family clearly wanted her to be with someone who was further along in their career than Seb was. Seb also knows that Lizzie tends to self-destruct as well. Lizzie builds up walls when she’s scared and she was doing so during the separation because she was afraid. She was afraid to let herself be vulnerable with Seb. This wasn’t the first time in the experiment for her and the last time had ended in disaster. The last guy had come into the experiment not really looking for love.

Seb did enter the experiment for the right reason. It’s just that he’s such a nice guy that Lizzie was afraid he would have tried to make it work with someone else if he been paired with someone else and so that held her back. Lizzie was afraid to trust her feelings for Seb. She turned to her family for advice because they’re close and she did so in spite of her mother already expressing disapproval. It was Lizzie’s mother that grilled Seb on what he wanted to do with his life. It was also her mother who straight up said Seb wasn’t good enough for Lizzie and so for her to turn to her parents now was a bit like she went seeking reasons to not be with Seb. And so they surprised her.

Her parents told Lizzie that they want what she wants. They want Lizzie to be happy and if that meant Seb then they were going to be okay with Seb. They just wanted Lizzie to be alright in her decision. Lizzie was all over the place and so no one really knew what she was thinking until the Final Decision. That was when Lizzie said everything she was feeling. She told Seb her worst fears about their relationship and then she added in at the last part that she couldn’t deny the feelings she has for him. Lizzie told Seb how different he was to any other man she’s been with. She told him how happy and secures he makes her feel.

Seb barely even waited to let her finish. He just grabbed her and kissed her. Seb’s answer was clearly “yes” as well and so now he gets to live happily ever after with his wife.

And while Lizzie wasn’t never forgotten how wrong the relationship experts got it last time, she thanked them for Seb.