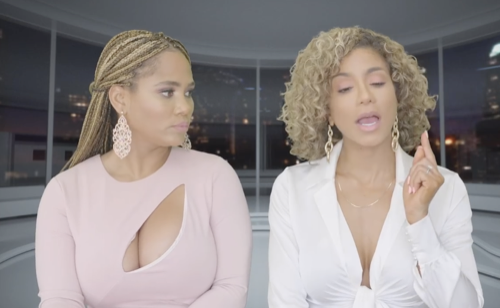 While Kendra is nervous about her first trip without her baby, Jazmin and Lia are ready to turn it up, causing things to get wild on the bus ride. During a naughty gift exchange, Shanique surprises Imani with a special package. Britten opens up about her own marital struggles.”

Imani came clean to the rest of the women. She told them that she was separated from her husband Phil and that divorce is on the table. This came as a surprise to many because they all thought Imani was happy. She never let on that there were problems in the marriage and she seems to have been fine with Phil living apart from her for so long, but it turns out it was an issue. Imani missed out on having a husband. She didn’t have a husband that wanted to spend time with her or who was willing to put their marriage first and so Imani knew she couldn’t keep living like this. She needed more. She needed a man who was prepared to provide for all her needs and unfortunately, she was never going to get that with Phil.

Phil is out. He wasn’t in love with Imani and she was no longer in love with him. Imani was making peace with that. She knows now want she wants and she told her friends that all she needed was to getaway. She wanted to go on vacation. Imani wanted to be able to clear her mind and re-center herself. She felt she could do that more easily if she got away. Imani was also rather lucky in her friends. Her friends all came out to support her and they did that by agreeing to do on vacation with Imani. Imani needed it. Her friends were willing to give her that and so they packed their bags. They were all ready to go out with Imani. And they even arranged for some fun activities that they all could do at the house.

Each woman came up with an activity. They all said goodbye to their husbands and families and they went on vacation together. Any problem that was there before was now gone. They put aside their petty issues to focus on Imani and they made sure they were all relaxed. They took something back at Shanique’s house. It made Shanique horny and Britten paranoid. They were all so high that they actually forgot about Imani for a minute. It was, therefore, a good thing she didn’t come to the party bus with them because they were acting a fool and Imani isn’t like that. She was a very chill person. She wasn’t, in turn, it up the mood and so she missed the party. The bus ride was wild. The ladies were laughing for a long time.

Imani was the first to arrive at the house. She loved it upon first sight and she welcomed the rest of the women when they came. Kendra came rushing into the building because she needed to pump. The other ladies followed and they were later introduced to Mark. Mark was the chef that Imani hired for the weekend. Imani also hadn’t assigned rooms and so there was a rush to get to the good room first. Imani got the Master. Lia got the only other private room and it came with its own bathroom which was great for her. Lia said she has to share her bedroom back home with her husband and children and so all she wanted to be some privacy. Britten and Kendra were going to have to bunk up because neither grabbed a room while they could.

Palm Springs was beautiful. The ladies came at the right time because it was tourist season and so everything was up and available for them. They already had a private chef. They also got a Shaman as well. The Shaman performed a cleansing ceremony and then he transferred all their negative energy. He claimed to have replaced it with positive energy. The Shaman was basically into the hocus pocus and the only one that seemed to be a believer was Imani. Imani said she needed all the help she could get to get rid of the crap. She got help from the Shaman and he later left. The ladies went from there to dinner. They met the chef, Mark. Mark was a black cowboy who was easy on the eyes and he delivered a delicious meal.

Jazmin of course was alone in wanting something else. She’s very concerned about her calorie intake because she used to be a bodybuilder and so Jazmin wanted only white meat. She didn’t get it, but she had wanted it at first and then she tasted the meal and had found it so delicious that she couldn’t wait to have more. Jazmin soon made her peace with the meal plan. She was happy and the ladies quickly moved into the first activity. The first activity was the “Naughty & Nice” portion. They were approaching Christmas and Imani knew she wasn’t going to get a gift from her husband so she agreed to do a gift exchange. And it started off as great because they were handing out dildos until Shanique was gifted a bullhorn.

The bullhorn was apparently a great description for her. Shanique ended up accepting the gift because it came from Imani and not because she actually liked it. Shanique also brought in a naughty Santa and his elf who did this S&M striptease thing. The ladies more enjoyed that than the gift-giving. They also talked. Imani told them how Phil told her the other day that he married because he felt like he could love her and that he wanted a divorce now because he realized he wasn’t as in love with her as he wanted to be. Phil was a bit of a jerk to tell Imani this. It can only hurt her and what would be the point. They were getting a divorce. He could have taken his feelings to the grave without having to tell Imani all of this.

Imani’s situation also has Britten worried. Britten’s husband travels a lot and then they don’t sleep in the same bed when he comes home. He has to sleep somewhere else because the kids sleep in the bed with Britten. Britten doesn’t see the problem with that even as she’s worried about the state of her marriage. Her friends have all tried to tell her that she needed to put up boundaries with her kids. They told her that she needed some private time with her husband and she should listen to them. Especially to Imani.

Imani last felt passionate about her husband five years ago. She had needed him to come home and just hug her. And he refused to.