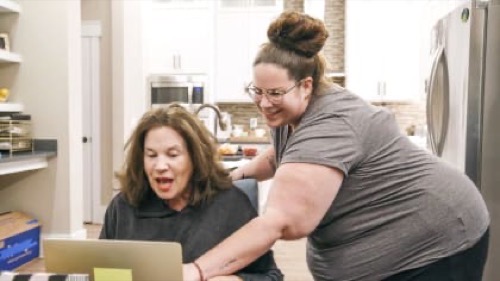 In tonight’s My Big Fat Fabulous Life season 8 episode 4, “Safer At Home,” as per the TLC synopsis, “While isolated at home due to the spread of Covid-19, Whitney struggles with her growing resentment toward Chase.

Will this quarantined couple come to an agreement over their living situation, or will the pandemic drive a bigger wedge between them?”

Whitney is back home. It’s been about a week since Whitney came back from Wilmington and a lot has changed since then. Her state has gone into lockdown. Everything that wasn’t deemed essential is now closed. This meant gyms and so Whitney couldn’t work out. She couldn’t work. She was basically stuck at home and she had guests. Her mother is staying with her. Her mother had gone with her to visit Chase and afterward Whitney never took her back home because she had been too concerned. They had just traveled. There was no telling what they might have picked up and so Whitney didn’t want to bring that home to her father. She also couldn’t risk her father being sick and it passing to her mother.

Her parents were elderly. They needed to take care of themselves. Whitney was going to keep a close eye on her mom and she advised her father to stay indoors. However, he couldn’t. His job was deemed essential. He was a General Manager at a plant and this meant he had to go in. He couldn’t just work remotely on the computer. He probably also would have had a problem with working with a computer and so going in person saved him the trouble. It just worried Whitney. Whitney was scared of the coronavirus. She didn’t want any of her loved ones getting infected with the disease because she read up on it and she knew it was bound to kill plenty of people. Whitney didn’t even want Chase staying in Wilmington. She wanted him to join her in Charlotte and he should have.

Chase’s bar is closed. It closed when the state went into lockdown and so Whitney didn’t see the point in him staying in Wilmington. There wasn’t much he could do there that he couldn’t do in Charlotte. Whitney also wanted them to start cohabitating. They were getting married soon and eventually, they’ll have to live together. So, what’s the hold-up? Chase should move in with Whitney and who knows what will happen. They could realize they shouldn’t live together or it could be perfect. It could mean all their worries about the situation were for nothing. Whitney wanted her man to be with her and she didn’t get why he didn’t want to be with her as well. It wasn’t like with her parents.

Chase wasn’t going outside every day or running the risk of catching the virus. They didn’t need to be separated for their health like her parents and so really why wasn’t he ready to move? Whitney tried to fill the gap he left with animals. She already had her two cats and so she bought a dog too. Her dog wasn’t small. He was on the big side and so he was more leading her than she was leading him on his runs outside. Her dog was also super affectionate. He was a sweetheart and Whitney was glad to have him. He helped take her mind off her problems. Whitney was still upset about losing her engagement ring in the ocean and she was also still upset that her fiancé had changed the plan for her.

Whitney didn’t mean to be a jerk about it, but Chase could literally be a manager at a bar anywhere and so there was no point for her to uproot her life to go there. Whitney talked about it with her friends. Her friends understood where she was coming from and they also told her that Chase’s position in Wilmington was high risk because he was around a lot of people there and Whitney needed to be careful because she was obese.

Whitney had heard that obese were at risk. She didn’t know if it was because this group has so many underlying conditions or not and so it turned out to be a good thing that she wasn’t around Chase right now. Whitney was able to continue working by doing her workout videos at her own personal gym. She handled one set of classes and Ryan handled another.

They were both glad to have a way to continue working and Whitney also talked to Ryan about Chase’s proposal. Ryan had suggested that she move to Wilmington to be with Chase. Chase doesn’t have anyone in the area and he was far from family and so Ryan thought Whitney should move there to finally offer him companionship and he didn’t get why she wasn’t willing to go to Chase on this one.

It was clear in moments like this that Ryan was Chase’s friend. He had probably already heard about Chase’s proposal and that’s why he was pushing so hard for Whitney to move to Wilmington. Only Whitney didn’t want to go. She said from the start that she was only willing to live in either Charlotte or Greensboro. She didn’t want to live anywhere else nor did she want to talk about it.

Whitney later received a visit from her brother Hunter. Hunter is living with their dad and so he couldn’t come into the house but he did bring gifts. He brought with him toilet paper. Toilet paper was like liquid gold during the lockdown because it was so hard to find and Hunter also brought his mother’s hairdryer because he knew she wasn’t washing her hair without it.

Both Whitney and Babs were glad to see Hunter. They clapped for him as he was leaving because he was a hero to them. Babs had also wanted to sneak into his car because she wanted to return to Greensboro to be with her husband and so unfortunately she wasn’t able to break Whitney’s stringent rules about safety long enough to get into the car. Babs stayed with Whitney.

She was there with Whitney when really she wanted to be with her husband. The same husband that wouldn’t wear a mask and who thought he was being safe by spraying his face with hand sanitizer. And so until he realizes it differently, he and his wife have to stay living with different children.